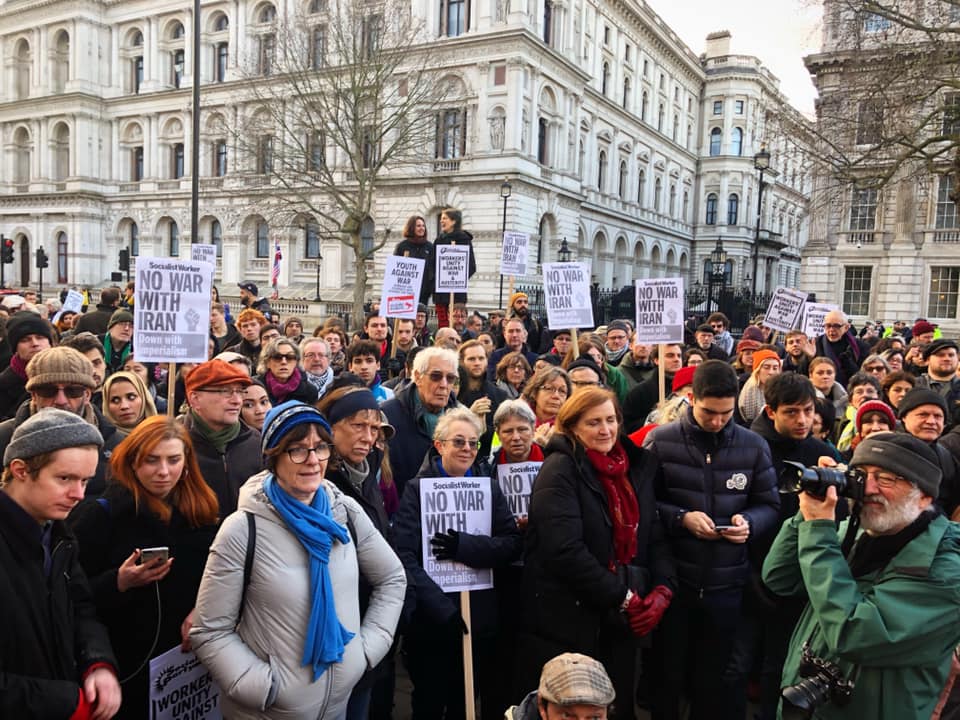 Protests against war with Iran will be taking place in Birmingham and London (Photo: Shabbir Lakha)

A rally against a possible US war with Iran is being held in Birmingham city centre tomorrow (Thursday) as part of protest action taking place across the country, following an escalation in tension between the two countries in the wake of the assassination of Iranian Major General Qassem Soleimani.

Organised by the Birmingham Stop the War Coalition, the demonstration has been called for 5pm outside Waterstones and the Bullring in High Street.

Similar protests have been called across the UK, including a meeting in London tonight where speakers include Tariq Ali, Lowkey, Lindsey German, Kate Hudson and Sami Ramadani.

According to the national Stop the War group, “The assassination of Iranian general Qassem Soleimani is an act of war by Donald Trump. The act was carried out in Baghdad, violating all agreements with the Iraqi government. Both Iran and Iraq will retaliate.

“Trump has been heading for war since tearing up the nuclear deal with Iran and if he succeeds will create a bigger war than we have seen in the Middle East. It will draw in major players across the region including Israel, Saudi Arabia and possibly Russia.”

Tomorrow’s protest in Birmingham is in preparation of a national demonstration planned for London this weekend. Thousands are expected to gather in the capital, meeting at Portland Place at 12pm on Saturday (11 January).

The assassination by the US military has relations between Washington and Tehran dipping to a new low, with US President Donald Trump saying the assassination was necessary to prevent an imminent threat. However, Iran’s leaders and allies say the killing represents an act of war.

Iran has responded to the killing by launching missile strikes on Tuesday night on Iraqi military bases, where US and UK soldiers are stationed. Twenty-two ballistic missiles were fired at two Iraqi bases housing US and coalition troops.

The Islamic Revolutionary Guard confirmed it launched the attack targeting the Erbil and Al Asad bases in retaliation to the assassination. However, US and Iraqi officials have reported no casualties. The Ministry of Defence has confirmed no UK personnel were affected.

“War with Iran has been on the agenda for US, Saudi Arabia and Israel for a while. Just [because] it’s madness personified, it doesn’t mean it’s not happening. And no, there’s no ‘easy win’ – look at Afghanistan and Iraq. Just misery in region and more world instability,” she stated.

“We need to mobilise again folks. Having given us the disaster of the Iraq war 17 years ago, the US/Saudi/Israeli axis is bringing us a war with Iran. The anti-war movement was right then. And is needed now.”

Prime Minister Boris Johnson appeared to back the killing of Soleimani in an US drone strike, claiming the general had the “blood of British troops on his hands”.

Johnson had so far not commented on the ongoing crisis in the Gulf region, but addressed the situation in Prime Minister’s Questions earlier today (Wednesday), saying:

“Clearly the strict issue of legality is not for the UK to determine since it was not our operation.

“But I think most reasonable people would accept that the United States has the right to protect its bases and its personnel.”

Opposition leader has Jeremy Corbyn repeatedly questioned the legality of the attack.

“What I’m saying is the only way forward if we believe in international law is to abide by international law. This is a provocative act, which has made the whole world a much more dangerous place.”

Protests against the US attack on Soleimani have taken place across the UK, US and Middle East, with calls for continued action to prevent an all-out war.

(Visited 594 times, 1 visits today)
https://www.iambirmingham.co.uk/2020/01/08/protest-war-iran-held-birmingham-anger-spills-across-globe/https://www.iambirmingham.co.uk/wp-content/uploads/2020/01/No-War-with-Iran-protest-in-London-by-Shabbir-Lakha-01-800x600.jpghttps://www.iambirmingham.co.uk/wp-content/uploads/2020/01/No-War-with-Iran-protest-in-London-by-Shabbir-Lakha-01-300x225.jpg2020-01-08T20:31:27+00:00Staff ReporterNewsPoliticsWorldAbu Alamgir,anti war,army,assassination,Birmingham,Birmingham Stop the War Coalition,Boris Johnson,Campaign,Demo,demonstration,High Street,Iran,Iranian,Iraq,Jeremy Corbyn,London,Major General Qassem Solaimani,military,military bases,Political,Politics,Protest,Qassem Soleimani,Rally,Salma Yaqoob,Stop the War,Stop the War UK,StW,STWC,STWUK,UK,United States,US,war,World WarA rally against a possible US war with Iran is being held in Birmingham city centre tomorrow (Thursday) as part of protest action taking place across the country, following an escalation in tension between the two countries in the wake of the assassination of Iranian Major General Qassem Soleimani. Organised by the Birmingham...Staff ReporterStaff Reporter[email protected]AdministratorI Am Birmingham
« Theatre company offsets carbon emissions from touring by planting their own tree grove
Birmingham to ring in Year of the Rat in huge celebrations for Chinese New Year »