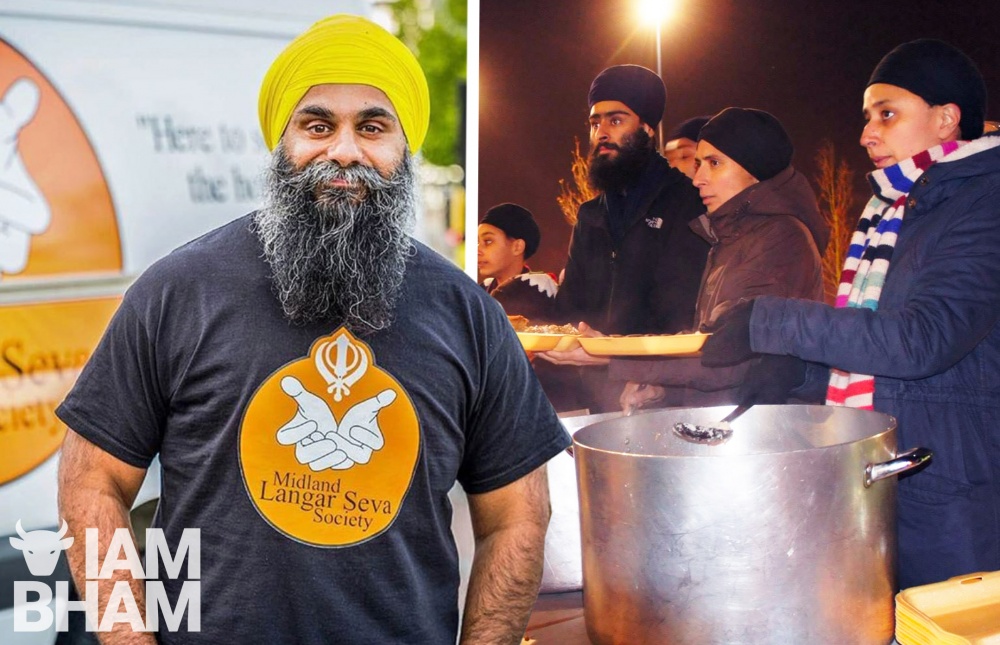 A Sikh soup kitchen in Birmingham is determined to continue feeding the homeless despite the threat of coronavirus.

The Midland Langar Seva Society – who feed the vulnerable and needy in Birmingham nearly every single day of the year, taking a break only on Christmas Day – have announced they won’t be backing down from their duty in the face of adversity.

The community based outreach project, commonly known as MLSS, meet on a daily basis in or around Albert Street in the city centre to feed hundreds of people, providing them with hot vegetarian food and drink.

Founded on the tenets of the Sikh faith, organisers feel it is their religious duty to help the destitute.

MLSS works with volunteers and service users from all faiths and backgrounds to help alleviate suffering on the streets, with chapters across the West Midlands and sister organisations located across the UK and abroad.

Following recent news of panic buying, a shortage of basic goods and self-isolation, the charity is committing to doubling their efforts to ensure rough sleepers and food bank users aren’t left abandoned as the nation grips with the  fallout from the COVID-19 pandemic.

MLSS founder Randhir Singh Heer is adamant they’ll keep their assistance going, while taking all of the necessary precautions for protection against the virus:

“MLSS homeless feeds are not being cancelled or postponed. The Khalsa does not shy away from its duty.

“Although we are taking extra precautions to keep our volunteers and service users safe we are not afraid to go out and serve the homeless. On the contrary we feel in the current climate it is even more important than usual to get hot food out to those in need.”

Heer has also praised the decision of Aston Villa Football Club to yesterday donate over 800 staffed packed lunches to the homeless after a match planned for today had to be cancelled amid the coronavirus clampdown.

As of Friday, there had been 798 confirmed cases across the UK, which is a rise of 208 on the day before – the largest daily increase to date.  Health officials have said they believe the actual number of people infected could be between 5,000 and 10,000.

Some 32,771 people in the UK have been tested for the respiratory infection so far. As of Saturday (March 14), 21 people who tested positive have died.

In December, the Midland Langar Seva Society held a special Christmas eve dinner at New Street Station for the homeless, in partnership with Network Rail. “Seva” is a Sanskrit word which refers to selfless service, an ordained philosophy in Sikhism.

The term “Langar” is used in Sikhism for the community kitchen where a free meal is served to all the visitors, without distinction of religion, caste, gender, economic status or ethnicity.

The free meal is always vegetarian and sometimes vegan. Meals served by MLSS are prepared and blessed under this philosophy.

Founded in October 2013, MLSS was set up in Walsall with a mission “to help the homeless and those in need around the UK” and provide “hot food and drink to those living on the street and those on the poverty line.”

Operating on a Sikh based ethos to help and support all people from all cultures and backgrounds, the organisation has expanded its services over the last five years, now operating across all major cities in the UK, with over 30,000 service users in the across the country.

In 2017, Randhir Singh Heer was awarded the Pride of Birmingham TSB Community Partner Award for his vision and efforts; and a celebratory mural bearing his likeness was unveiled in Birmingham city centre, opposite Grand Central.

Heer went on to receive the Queens Award for Voluntary Service Group MBE in June 2018, the Prime Minister’s Point of Light Award in January 2018, and several regional and national accolades.

In January 2020, Jaguar Land Rover in Castle Bromwich generously donated a brand new Jaguar XF Sportbrake to Heer and his team to help them with their ongoing work.

With no intention of limiting their compassion, MLSS has successfully initiated projects abroad, including in Germany and Italy; and have made regular trips to Greece, France (Calais) and more recently to Thailand to provide relief to those in need.

In India – the spiritual home of Sikhism – the organisation serves abandoned children and families in the Punjab region, many of whom have become displaced or refugees. Fundraising to continue their work, MLSS provide free education, clothing and support.