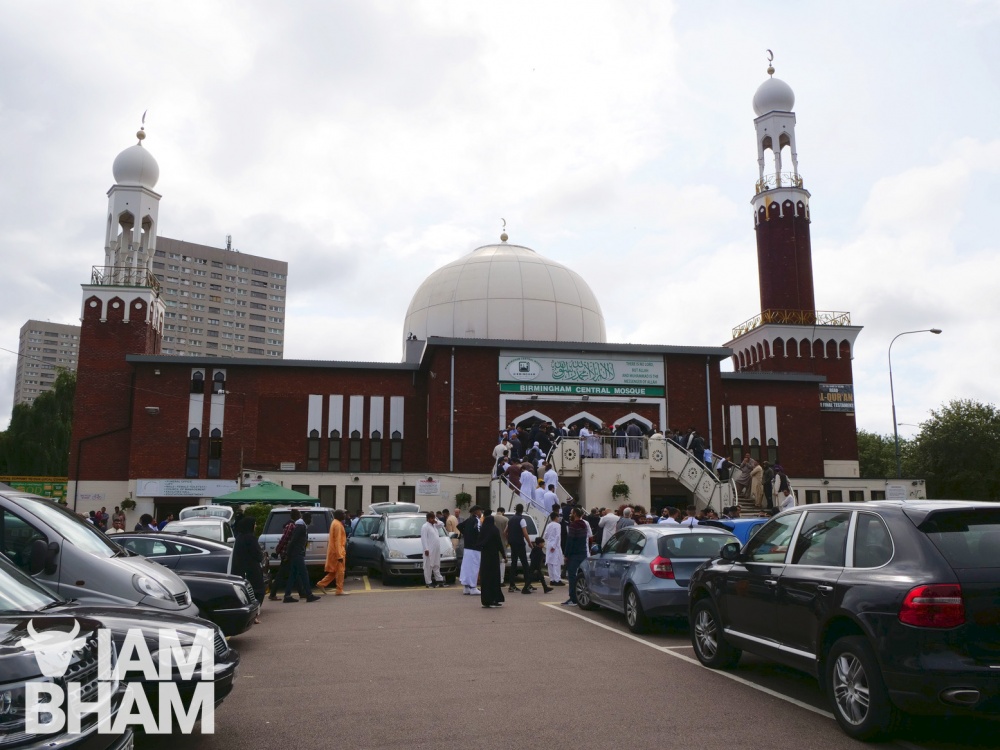 Birmingham Central Mosque has cancelled congregational Friday prayers due to the coronavirus pandemic.

The mosque in Highgate exclusively revealed to I Am Birmingham that the venue’s Jummah prayer services, which attract thousands of worshippers every week, would be abandoned if stricter regulation is enforced around large gatherings.

After the government yesterday encouraged members of the public to stay away from large social gatherings and the Muslim Council of Britain (MCB) called for the suspension of all congregational activities at UK mosques, the Birmingham religious centre has decided to cancel forthcoming mass prayer services.

In a bid to minimise the risk of COVID-19 infection, the Islamic place of worship is cancelling the large prayer service, although regular daily prayers would continue in a minimal capacity.

The religious community hub has already urged the elderly to stay away from group prayers, which many Muslims attend five times a day, and told us they would close completely if government guidance insisted upon it.

Harun Khan, Secretary General of the MCB, said, “Muslim communities up and down the country, like others, have been carefully considering how best to continue with our regular social and religious activities, whilst trying to minimise the spread of the coronavirus.

“With the increasing rate of transmission and the number of deaths, medical and scholarly advice all points towards the limitation of social contact as the key towards reducing the spread.

“We all have a public duty to protect one another from harm, and it is evident the most effective way to do this now is to avoid social contact as much as possible. This includes all walks of life, whether social, work or the mosque.

“This leaves members of our society who are vulnerable and socially isolated at risk. Now is the time for British communities to come together to support one another, and work with friends, family and neighbours to ensure no one is left behind.”

The mosque has already been working hard to prevent the spread of coronavirus on its premises, having already spent over £1,000 on hand sanitiser and hygiene products.

On Saturday, the mosque’s elected chairman Maqbool Ahmed told I Am Birmingham:

“We will go along with advice given by the government and their chief medical adviser. If they say gatherings of over a certain number need to be banned, we will adhere to that for the sake of the health, safety and security of our adherents and the general public as well.

“Our main congregation attendance is on Jummah when we have 3,000 plus people in the mosque on Fridays, but during the other prayers, we usually get a handful to be honest, as people pray at their local mosques or at home.

“The Jummah gathering is the main one that takes place and that’s the one that will be affected if the government advises that we cease to hold the congregation. We will then have to cancel.

“We’ve presently instructed older worshippers to remain at home for their personal protection, so the regular daily prayers we are carrying on with at the moment have no more than twenty or so people attending. We’re asking vulnerable people at higher risk to stay at home and self-isolate, don’t come into the mosques.”

Mr Ahmed accepted that the mosque would have to close its doors if this national policy demanded it.

“In terms of closing the mosque, we haven’t been asked to do this at the moment but if there is any government instruction to do that, we will. We have to be very careful and follow the government recommendation on this matter.

“This is something that is affecting all communities. We, as the Muslim community, have to take part in doing our bit to make sure we all adhere to the requirements the government has recommended; and serve the community to respect everybody.

“We must do what we can to help reduce and eradicate this virus, and the sooner the better, by following the advice of medical experts.”

Major sporting and cultural events across Britain have already been cancelled in response to the health crisis, with the number of confirmed cases of the virus in the UK rising to 1,140 as of today (Saturday 14) and the total number of people who have died as a result of the virus nearly doubling to 21 since yesterday.

However, the government estimates the true number of positive cases to be around 5,000 to 10,000 around the UK.

For Birmingham Central Mosque, the outbreak has been a testing time to which they’ve so far responded with relative caution. According to the trust’s General Secretary Dr. Mohammed Hanif, staff at the centre have taken every possible precaution that is presently being advised by the NHS.

This includes spending an extra £1,000 on hand sanitiser and a large quantity of extra tissue paper and bins in which to dispose of used items.

“We have implemented the government’s advice on prevention including avoiding shaking hands, washing hands regularly and using antiseptic hand gel.

“We have made hand gel available around the mosque and increased frequency and depth of cleaning schedules. We have advised elderly users and those with elderly relatives to avoid congregational prayers especially on Fridays. Signs have been placed around the mosque to advise our patrons of these precautions.

However, the mosque has stopped short of full closure, citing regular hygiene as key to its patrons’ spiritual philosophy.

“As Muslims we routinely wash five times a day before prayers and we are now also encouraging use of antiseptic gel. We have not cancelled Friday congregational prayers in line with current official policy but are monitoring the situation and awaiting further guidance from the government.”

So far, the government has not enforced a ban on large gatherings but a u-turn appears to be underway.

For the city’s Muslim community, there are currently no large gatherings outside of congregational prayers which are being considered for cancellation. However, if the pandemic lingers for more than another four to five weeks, it could affect the holy month of Ramadan, which starts around April 23.

Any official nationwide ban on large gatherings would equally affect all other places of worship too, including churches, synagogues, gurdwaras and temples.

Management at the Shree Geeta Bhawan temple in Handsworth have also taken precautionary steps to curb the spread of coronavirus, cancelling their over-50 club and dropping several Pooja (worship) ceremonies from their weekly schedule until the end of March.

However, the Hindu temple’s main prayer space – known as the mandir  – is still open as per the venue’s standard opening hours, providing attendees follow the well-publicised NHS guidelines to minimise any risk.

Following the global outbreak of COVID-19, religious sites around the world world including the Kaaba in Mecca and Saint Peter’s Square in the Vatican have been left mostly empty and deserted.

Vatican officials have announced that offices will remain open in order “to ensure the essential services to the Universal Church”, while at the same time implementing the health measures necessary to avoid the spread of the new coronavirus.

As of Tuesday (March 17), the number of UK coronavirus deaths had reached 71, with the youngest aged just 45. Of these fatalities, 67 have been in England.

The latest figures come after the government ramped up measures being taken against the coronavirus pandemic following new predictions that the UK could otherwise have seen 250,000 deaths.

According to official figures, a total of 50,442 people have been tested for coronavirus in the UK and 48,492 tested negative.

(Visited 1,998 times, 1 visits today)
https://www.iambirmingham.co.uk/2020/03/17/birmingham-central-mosque-cancels-friday-prayers-amid-coronavirus-pandemic/https://www.iambirmingham.co.uk/wp-content/uploads/2019/08/Eid-al-Adha-celebrations-at-Birmingham-Central-Mosque-10.08.19-80-800x600.jpghttps://www.iambirmingham.co.uk/wp-content/uploads/2019/08/Eid-al-Adha-celebrations-at-Birmingham-Central-Mosque-10.08.19-80-300x225.jpg2020-04-08T20:08:31+00:00Staff ReporterCoronavirusFaithHealthNewsWorld20/20,ban,BCM,Birmingham,Birmingham Central Mosque,cancel,cancellation,coronavirus,COVID-19,Dr. Mohammed Hanif,England,Friday prayers,Hand Sanitiser,Health,Highgate,jamaat,large gatherings,Maqbool Ahmed,March 2020,Mass,mass gatherings,Mosque,NHS,Outbreak,pandemic,prayers,Ramadan,UK,VirusBirmingham Central Mosque has cancelled congregational Friday prayers due to the coronavirus pandemic. The mosque in Highgate exclusively revealed to I Am Birmingham that the venue's Jummah prayer services, which attract thousands of worshippers every week, would be abandoned if stricter regulation is enforced around large gatherings. After the government yesterday encouraged members of the public to stay away from...Staff ReporterStaff Reporter[email protected]AdministratorI Am Birmingham
« Two teenagers arrested for the shooting of Abdul Wahid Xasan
Birmingham Hare & Hounds venue shuts down amid coronavirus crisis »