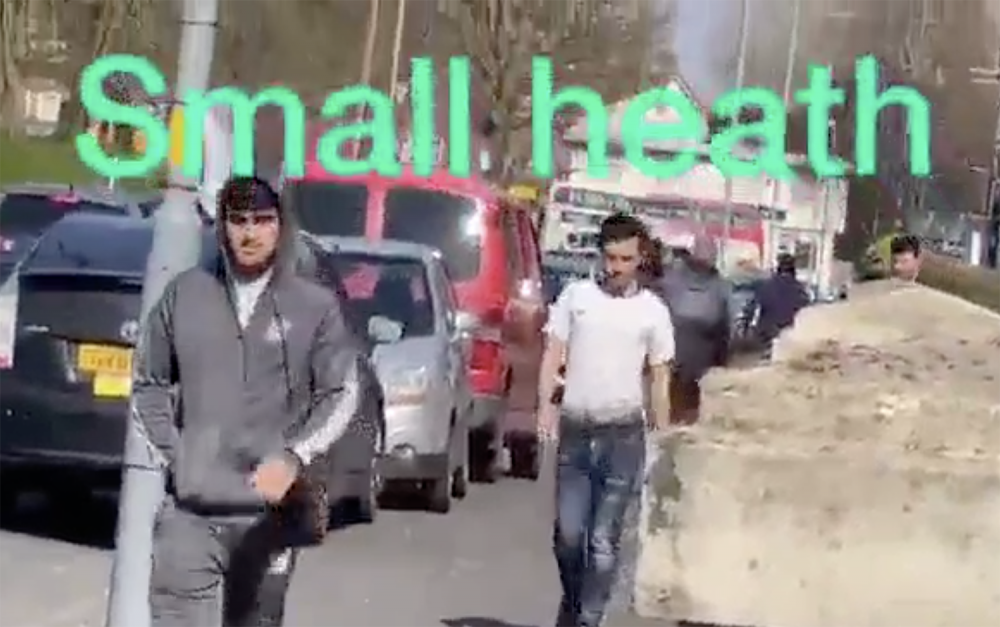 Police have rebuked a ‘fake’ video being shared on social media which aims to demonise Birmingham Muslims by claiming they are congregating at a mosque in Small Heath during the coronavirus lockdown.

In recent days, the video has been circulating across social media allegedly showing a large group of worshippers entering and leaving a mosque following prayer services.

The short video has since been shared across Twitter and Facebook with claims that the mosque and its patrons were deliberately defying new government restrictions which have effectively placed the country under lockdown.

In the recording, the individual filming is heard telling an attendee to “be careful” of how many people have gathered in the building.

This narrative has also been adopted by right-wing activists, who have been distributing the video in an attempt to paint the city’s Muslim community in a bad light.

However, West Midlands Police have now investigated the alleged ‘breach’ and confirmed the video – which has the words “SMALL HEATH” emblazoned across it – was shot well before the new coronavirus lockdown regulations came into force.

Yet, despite the fact the place of worship is observing the new rules, the controversial video – which has no date stamp or author details – continues to be shared across social media sites out of context, and coupled with claims the mosque is still open for services.

According to council census figures, around 70% of the people living in Small Heath are Muslim, in a city with a 20% Muslim population.

“We’re aware of a video circulating that appears to show a group of people leaving a mosque in Small Heath during the lockdown.

“Although we can confirm the footage was filmed in Small Heath, our officers have conducted enquiries and are satisfied that the mosque is currently closed.

“The neighbourhood team have spoken to many residents living on the street, who all confirmed that the mosque has not been open since the restrictions were announced last Monday (23 March).”

This isn’t the first time fake news videos have been used to attack the city’s Muslim residents.

In 2018, a video of football hooligans in Switzerland damaging cars went viral after being shared with the description of Birmingham Muslims causing carnage during Ramadan.

The video was subsequently declared a hoax but false rumours continued to persist among far-right websites and alt-right online accounts.

Some members of the faith community fear far-right sympathisers will use the Tennyson Road mosque video to push forward an inaccurate Islamophobic agenda during the coronavirus outbreak. Similar ‘fake news’ posts have already been circulating online.

But detectives who investigated the video footage are urging calm and common sense, asking people to think carefully before posting such material.

Government specialist units, working to counter false information about the coronavirus pandemic, have said they’re responding to as many as 70 incidents a week, revolving around misleading false news narratives. Phishing scams being carried out by criminals are also on the rise, many of whom hope to exploit fears surrounding the spread of the virus.

The government is calling on people to help fight the spread of misleading information surrounding COVID-19, re-launching a campaign called ‘Don’t Feed the Beast‘, urging people to think carefully about what they share online.

Treasury minister Penny Mordaunt encouraged people to “take some simple steps before sharing information online, such as always reading beyond the headline and scrutinising the source”.

Restrictions during the UK lockdown urge residents to “stay at home” with the exception of essential but infrequent visits to a local shop for food, one walk or form of outdoor exercise a day, any urgent excursion to see a health professional, or if they absolutely must attend work which cannot be done from home.

Members of the public are also asked to stay 2 metres (6ft) away from other people at all times when outside, and to wash their hands as soon as they get home. The government guidance also insists people do not meet others, even friends or family.

Like many outreach workers, health staff and charity groups, Muslims individuals and organisations have been contributing to the effort to fight the coronavirus outbreak.

The three British doctors who died in the space of one week, while on the NHS frontline battling COVID-19, were immigrants of Muslim backgrounds, according to media reports.

Sudanese-born ear, nose and throat specialist Dr Amged El Hawrani died in Leicester after he had tested positive for the virus, followed by Sudanese surgeon Adil El Tayar and Habib Zaidi, a GP of Pakistani heritage.

63-year-old El Tayar worked in Sudan and Saudi Arabia, but had returns to Britain to help the NHS cope with the coronavirus pandemic.