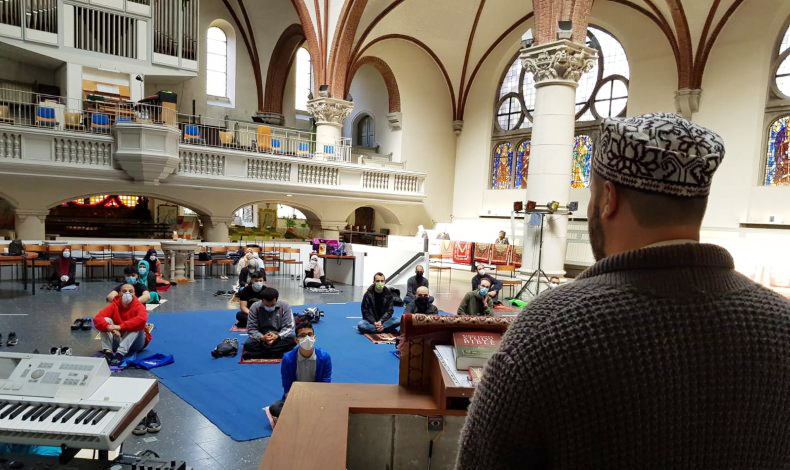 An amazing act of solidarity as a German church opened its doors to allow Muslim prayers on Friday (Photo: DAM)

A church in Berlin opened its doors to allow Friday prayers to Muslims as the holy month of Ramadan comes to a close and Eid celebrations begin this weekend.

This act of solidarity comes after German president Frank-Walter Steinmeier vowed to fight the rise of Islamophobia in Germany on Friday.

A devastating terror attack at a shisha lounge and sports cafe in February resulted with the tragic death of nine people in Hanau. The victims of the far-right shooter were mostly Muslim.

President Frank-Walter Steinmeier was saddened and disturbed by this hideous hate crime and felt the killings were orchestrated to destroy key German values such as diversity, freedom, coexistence and tolerance.

He issued a message on Friday as the German Muslim community marked the end of Ramadan.

In his message Mr Steinmeier stated that “protecting Muslims was not only the duty of the state but also of every individual in Germany”.

He said: “Hatred and exclusion, violent attacks targeting Muslims, attacks on mosques – we cannot tolerate this, we cannot allow this.”

A church in Kreuzberg, Berlin, opened its doors to Muslims on the same day as Mr Steimeier delivered his message of solidarity.

Muslim worshippers, who were unable to fit into their mosques for Jummah prayers due to strict German coronavirus guidelines regarding social-distancing, were welcomed into the Martha Lutheran church.

German authorities have relaxed some of the coronavirus lockdown rules and allowed religious buildings to open and for services to resume on May 4. However, worshippers are instructed to maintain a distance of 1.5m (5ft).

The Dar Assalam mosque in Neukölln, Berlin, was only able to allow 50 worshipers at a time due to these restrictions so the nearby church offered to host the Muslim worshipers.

The Islamic services inside the Martha Lutheran church were conducted in Arabic and German.

Mohamed Taha Sabry, the imam who led the Jummah prayer services in the church, said:

“It is a great sign and it brings joy in Ramadan and joy amid this crisis.

“This pandemic has made us a community.”

The pastor at Martha Lutheran church, Monika Matthias, said she “felt moved by the Muslim call to prayer”.

She added: “I took part in the prayer. I gave a speech in German. And during prayer, I could only say yes, yes, yes, because we have the same concerns and we want to learn from you.

“And it is beautiful to feel that way about each other.”