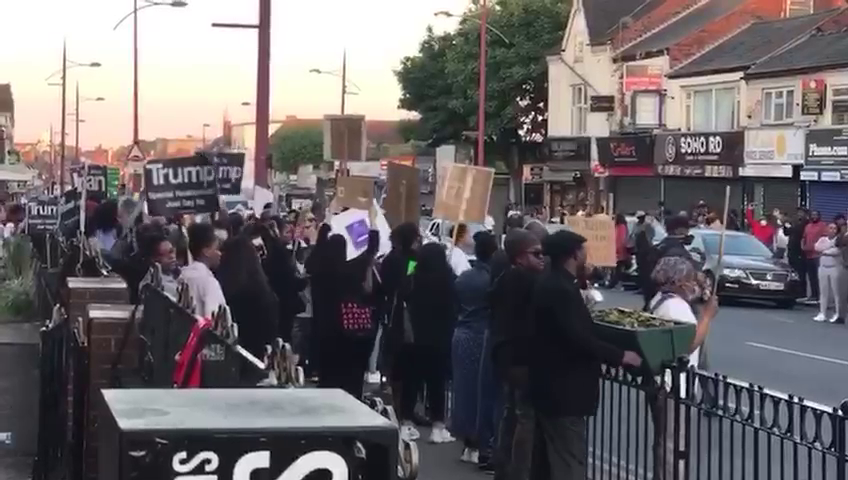 The protest for George Floyd in Soho Road went ahead peacefully on Monday night despite being cancelled by the organisers at the last moment due to ‘security concerns’.

Around 300 protestors came out and thronged Soho Road around 8pm to show their support and solidarity with George Floyd, the tragic victim of police brutality in Minnesota.

A planned protest which was due to take place outside the Cannon Street Memorial Baptist Church in Soho Road was cancelled on Monday evening by organisers who cited ‘security concerns’ for the cancellation.

The news of the cancellation failed to deter the people of Handsworth.

Around 8pm the location of the demonstration in Soho Road was packed with scores of people, with more arriving to join them as the evening wore on.

The public feelings about the death of George Floyd, and the issue of racism, are running high around the world.

The people of Handsworth in Birmingham refused to stay silent and they came out in their droves to march and express their voice along Soho Road on Monday night.

People of different races and cultures spotted walking in solidarity and peace. Some of the protestors were holding up anti-racism placards and banners.

The protestors came from a diverse mix of Birmingham communities, including refugees, all galvanized by the death of George Floyd in their vision to seek justice and erase racism from society.

The video footage of George Floyd’s brutal treatment at the hands of Minnesota police has gone viral and sparked widespread anger and rioting but the protestors in Handsworth remained in a positive and peaceful mood.

Some of the protestors were singing protest songs of freedom and emancipation in small groups on the pavement.

Soho Road, which is usually very busy with traffic, was thronged with lines of demonstrators and both sides of the street including the road itself, with cars moving slowly to let the protestors march by safely.

Motorists slowed down their vehicles and drivers honked their horns to show their support and solidarity with the demonstration.

The brutal killing of George Floyd in America has shocked and disturbed people from around the world and inspired protestors to march.

A large number of last night’s protestors from Handsworth who marched through Soho Road were seen with anti-racism and anti-Trump placards.

There were also lots of ‘Black Lives Matter’ slogans and banners, including ‘More Blacks, More Irish’.

The crowds were also heard chanting words of unity, solidarity, and equality during the protest.

“No justice, no peace” was heard loud and clear as the demonstrators walked through Soho Road.

People behaved peacefully and there was no sign of any aggression or violence during the protest, and no businesses or properties was attacked or vandalised.

Some of those in attendance at the protest included people with walking sticks, a wheelchair user, and even some cyclists.

This demonstration on Monday night is unlikely to be the last of its kind in Birmingham.

The cancellation of this event failed to stop people from coming out and marching.

One protestor at the scene, who wishes to remain anonymous, said: “I pray for a day when we can all live in peace. There’s too much hate out there, and our leaders are adding fuel to it every day.

“I don’t want my kids to live in fear.

“We should all just get along. Just live. And be at peace.

“That’s my prayer every night. Peace.”