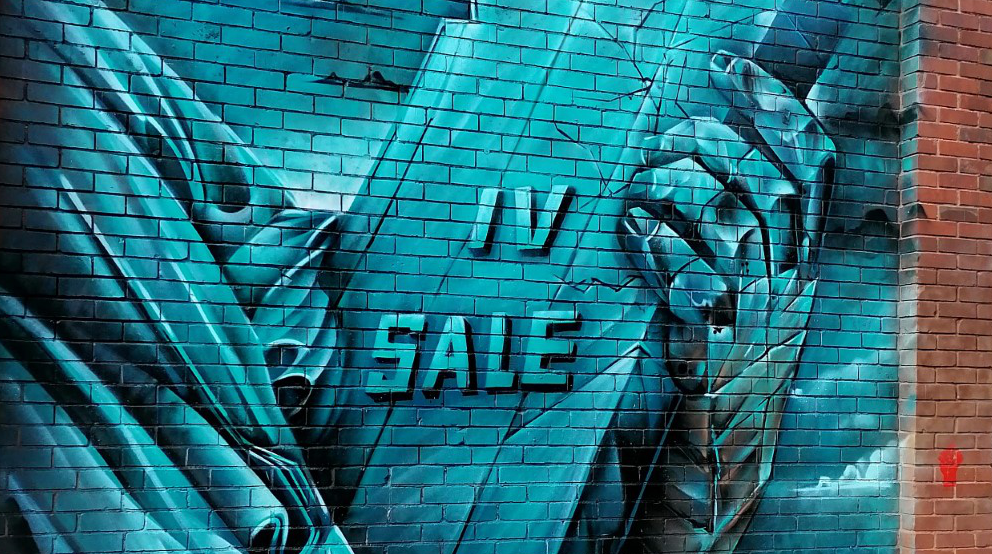 New street art touching on the theme of freedom painted in Digbeth following the brutal murder of George Floyd in America (Photo: Void One)

A Birmingham guerilla artist has painted new street art in Digbeth inspired by recent tragic events in America following the brutal slaying of George Floyd at the hands of a white police officer.

Guerilla artist and activist Void One spoke to I Am Birmingham and shared his thoughts about his new ‘Liberty for Sale’ art and the inspiration behind the new work.

The new street art in Digbeth depicts a close up of the tablet held in the hands of the iconic Statue of Liberty. Void One has replaced the original inscription on the tablet – July 4th 1776 – which is a reference to the date of the US Declaration of Independence to an ironic and topical ‘IV Sale’.

The tablet is cracked and chains dangle from Lady Liberty’s wrist, and ‘We the People’ is emblazoned across the top of the panel.

The handcuffed wrist and chains make a poetic and poignant reference to the loss of liberty for the sake of profits and also the tragic killing of George Floyd who was handcuffed as a white officer pressed his knee into his neck while George pleaded “I can’t breathe”.

Civil rights and civil liberties are under constant attack according to Void One.

“There is no liberty, just liberties,” said the artist.

This latest work inspired by the tragic death of George Floyd comes in the wake of another street art tribute last week by Mohammad Ali in Kings Heath which was whitewashed by Birmingham City Council.

Void One is the artist behind this powerful and startling new art in Birmingham and he spoke to us about the art and touched upon events taking place in America and in the UK in the aftermath of the murder of George Floyd.

The artist has previously told I Am Birmingham that he believes in the power of art to reach people in a very direct and visceral manner. He attempts to convey his political and social messages about freedom through the medium of art.

The tragic murder of Afro-American George Floyd in Minnesota, which has sparked protests across America and around the world, including Birmingham, is the source that fuelled the new art in Digbeth.

Talking about racism and the lack of real change, artist Void One told us:

“They said it was a lack of information that was holding people back before the Internet, but there’s an apparent historical amnesia, or worse ignorance at the moment.

“It was only 60 years ago that segregation existed in the States and they were lynching black people.

“It was only 60 years ago that the Tories ran their infamous ‘Nigger for a Neighbour’ campaign.

“It’s naive to expect we’ve moved on so much in such a short space of time.”

He added: “Events across the pond are rightly being condemned as police attempt to quell rioting caused by police brutality with ever more alarming acts of brutality.

“We think of the Civil Rights movement as a thing of the past. ‘I have a dream’, but that dream now only extends as far as banal sentiments in meme form to demonstrate how ‘woke’ you are.

“Apathy is compliance, acceptance of the status quo, and that’s intolerable.

The artist stressed: “Until there is real justice, there can be no peace.”

The artist discussed his views about the “struggle” for equality for black people and how the fight for freedom must not be hijacked or distorted by ‘privileged’ white people. He issued a warning to people who try to deflect the cause of black people currently campaigning for justice, equality and acceptance.

“The struggle for equality binds us, it’s a shared destination that we must arrive at together, but for now I think it’s important we listen.

“A lot of white people are getting it twisted as somehow excluding anyone else from ‘mattering’.

“Making it about your delicate white ego is precisely part of the problem.

“It’s gross self indulgence and wilful ignorance to not see that at this moment it isn’t about you, but you do have work to do.”

Void One is concerned about how the colonial past of nations is often erased or airbrushed in History books and rarely taught with integrity in educational institutions.

“So long as our history books and education programs don’t accurately contextualise and confront the accepted narratives concerning our colonial history, the crimes of empire, the racism that built the world we live in, nothing will change,” he said.

The artist told us about his reaction after watching the shocking video of George Floyd’s brutal murder.

He said: “I was moved by George Floyd’s death. I watched the video not knowing he would die, and felt like many that I wished I could punch through my screen and make it stop.

“Another massive ‘f*ck you’ to the notion of policing by consent, and another unnecessarily fatal abuse of power.

“I’ve tried to hear what the BAME community are saying, and I feel as a white guy who was brought up on black culture, it’s my responsibility to use the platform I have to speak up.”

Taking about how social media platforms acknowledged and marked the murder of George Floyd with a black tile he said, “A black square on social media would never be enough, so I painted this.”

Void One has used his talent as an artist to highlight social injustice and inequality, including the theme of war and politics.

Touching on his latest art he told us: “I’ve been playing with the iconography of justice, and that evolved into a series of paintings, ultimately a polyptych allegory of liberty.

“The IV July is replaced with IV SALE.

“We the people – whether our labour or data – our only purpose is to serve as stock.

“Emancipation was never about liberty or equality, which is why they compensated slave owners for their loss of ‘property’.

“It renders the concept of liberty as hollow as the statue itself.

“It was always about transference of wealth from the state to private ownership.

“The taxes from black people paid the debt for their ancestors freedom until as recently as 2015 in the UK.

“What a horrific legacy.”

The artist hopes the symbolic power of art will challenge and provoke people to think beyond the ‘shackles’ placed upon free thinking.

He said: “I think in a world where opinions are stated as facts and with the backlash against science, and experts in general, these symbols are more important than ever.

“They’re archetypes within our collective conscious that transcend argument.

“You can’t fight a symbol, only reflect upon why you feel the way you do about it. These symbols are used to legitimise power and I want to challenge that authority.

“I want more of my work to provoke these kinds of reflections.

“Systemic change must come from public pressure, and if people aren’t hearing the message, we need to find other ways to communicate.”

Void One has always shown a deep passion for a shared humanity in his art and outlook and the murder of George Floyd has compelled him to use his material to arouse debate and discussion in the community.

He confirmed more material is coming which will continue the theme of a shared humanity and social injustice.

He offered a humble message to the black community: “Ultimately, I know I’m incapable of ever fully understanding, but I do stand with you.”