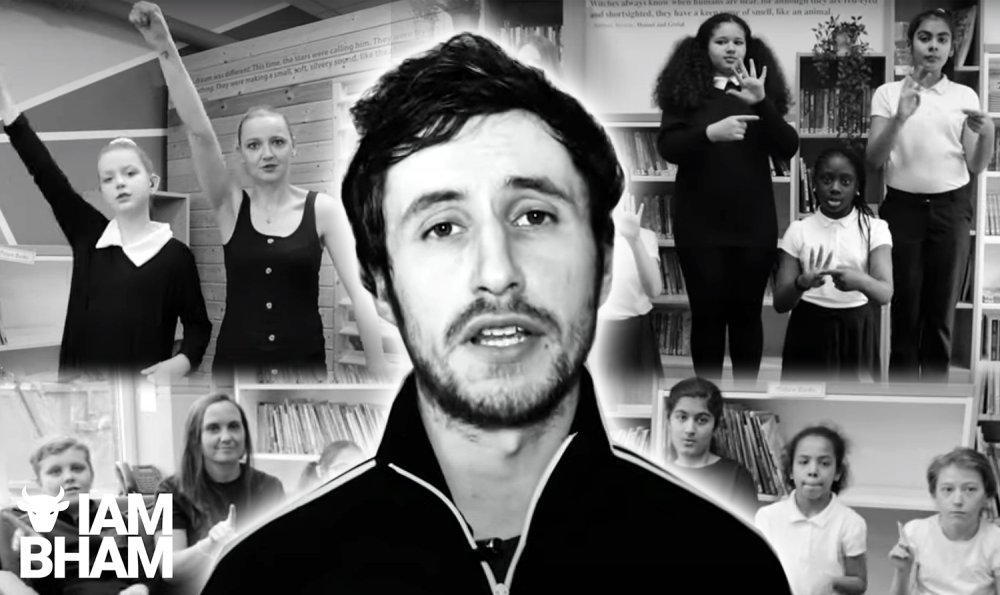 Dyslexic poet Joe Cook has teamed up with young people in Birmingham to produce a performance video in sign language (Image: IAB/Chris Neophytou)

A video has been released for Learning Disability Week featuring young school children from across Birmingham sign performing a poem written by a dyslexic poet from the city.

Joe Cook, 28,  is a dyslexic poet, performer and musician who works in a primary school teaching poetry and rhyme Year 4 to Year 6 pupils. To mark Disability Awareness Week, Joe had written a poem called “Lock Pickin'” and was inspired to have it performed using BSL (British Sign Language) after another one of his spoken word pieces was sign performed by an interpreter in London.

With his poem lyrically focusing on access to education and opportunity, Joe realised he needed to sure it was accessible to all, and decided to have it performed in sign language by young people who might suffer because of cuts to educational services.

“I work in a Birmingham Primary and Junior School one day a week where I teach Year 4, Year 5 and Year 6. I do a mixture of poetry and rhythm lessons with them we look at lyric writing, creative writing, beat making, combining rhythm and words and everything in-between.

“I also have an after-school club where we do more music production. The school also has an afters school sign club ran by members of staff and parent volunteers. The kids are learning BSL.

“I’ve bee fortunate enough to be able to sit in on a few of the lessons and it’s brilliant! The kids really have picked it up so quickly and it’s taught in a real engaging fun way. So I had the idea of seeing if we could collaborate and get the young people involved with the video.”

Having originally penned the poem after being invited to perform at a conference in the Birmingham Council House by Sutton Vesey Ward councillor Kath Scott (Lab), Joe was then invited by the National Union of Head Teachers (NUHT) to speak at conferences in Birmingham, Telford and London.

It was here that he “was so inspire and moved” by parents and teachers that he wanted to do something to help the campaign to add pressure on local authorities and government to ensure young people had access to the best education possible, with the support they needed in place.

For his performance piece to create impact, Joe roped in photographer and filmmaker Chris Neophytou to shoot the piece, which involved young people performing different parts of the poem in sign language while in school.

“I spoke to the school about it and they fully got behind it. I performed the poem to the kids got their feedback and we had a quick chat about what it is I was talking about and if there was anything they thought I could change etc.

“Our idea was that the young people would learn to sign different sections of the poem, and then would perform it to camera to an overdub of my voice.”

The filmed segments were then edited together with music and slick visual editing to create an engaging black and white video that include Joe’s performance to camera along with a call to action responding to the funding shortfall for special needs education.

“All credit is due to the school staff and parent volunteers who worked so hard in not a long amount of time to teach the kids how to sign each section and of course the biggest props has to go to the young people themselves for taking on such a massive task whilst juggling all the stress of exam practice and revision and to do it to such a high standard,” explained Joe.

“The foundation of the music in the video was made by the Year 5’s who come to my after-school club. They came up with the ideas and basic sounds, all I did was add the piano and put it together for them so this is a real collaboration, not just between different practitioners but between staff and students.”

Although the video was due to be screened at the NUHT conference in Manchester this year with Joe as a keynote speaker, the event had to be cancelled due to the coronavirus pandemic.

“Unfortunately the conference had to be cancelled due to COVID-19 and will hopefully be rescheduled for late this year.

“Schools are under even more pressure now with everything that has happened due to the virus and under funding and obey social distancing rules is really going to effect the educational experience of young people.

“Schools have been a crucial life line for young people and families during these lockdown times not just for the children of keyworkers.”

“The theme of the week was the importance of friendships during lockdown. Due to the coronavirus pandemic, we have all been living in lockdown. This means that many people with a learning disability are feeling isolated, as they have been unable to see their friends and families.

We know that people with a learning disability already experience high levels of loneliness and social isolation and that this will only have been made worse by the lockdown.

We want to show the importance of friendships to help with tackling isolation, as well as exploring the different ways of maintaining friendships during this unusual time.”

Who is Joe Cook?

Joe Cooke is a 28-year-old  spoken word poet, educator and performer from Birmingham, living with dyslexia. He is also a professional musician playing in several bands with friends.

At the age of eight, he was diagnosed with learning difficulties but was told he had Scotopic Sensitivity Syndrome, which affects how the brain processes information, but it wasn’t until he was 22 that he found out he was dyslexic.

Throughout his time in education, Joe was constantly told by teachers that he wouldn’t amount to anything if he didn’t get the grades. Despite everything he faced throughout his education, both the obstacles he faced through learning and the emotional stress he was under, he was still able to get into university, both wanting to prove people wrong and to make his aunt proud who passed away a few years ago who had always believed in him.

“Because of my grades I just thought I’m not built for that world, but towards the end of my college year, I realised that I had the sort of grades that could get me into university.

“My aunty who passed away when I was 16, who’s a really important woman within my life, who’d been a massive inspiration to me, she was a teacher who worked with special additional needs, and she got me diagnosed with Scotopic Sensitivity Syndrome. She always thought I could’ve gone and would always tell me to look at into it, so it was kind of like something I wanted to do for her as well, without that bigging up I wouldn’t have gone.”

Despite the support of his family members, he realised that there are stigmas attached to the invisible disability, which was made clear when he went to a house party, where there were grammar school students where one of the partygoers said that dyslexic is another word for retarded.

“I think if you’re going to judge anyone because of their learning disability, or physical disability, you’re just an idiot. To think that we’re all going to be on the same playing field is ridiculous.

“With dyslexia, I think people just think you’re not intelligent, that you’re uncapable, which is the worst thing. I think the stigma on the flip side, is that people think that you struggle to read a bit or get your d’s and b’s backward, but it’s how you process information, which is how you communicate, which is how you see the world, it generally affects your life and a lot of the things you do.”

◉ READ MORE about Joe’s struggles with dyslexia and his personal journey here.