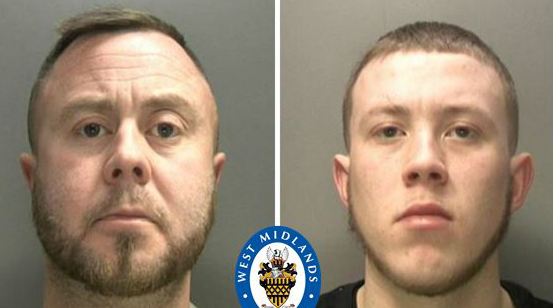 A ruthless gang of violent armed robbers have been jailed for a combined total of almost 100 years (Photo: WMP)

A balaclava-wearing gang of armed robbers who “used extreme violence” to rob homes and shops with sawn-off shotguns and hunting knives are behind bars for a total of almost 100 years.

The five-strong gang – led by father and son crooks Nicky and Corey Rothero – struck at homes, shops, pubs and a bingo hall across the West Midlands between October 2018 and February 2019. Police described the dangerous gang as “a ruthless band of men driven by greed” who assaulted and terrorised their victims.

Their victims, which included families with young children, came face-to-face with masked raiders armed with guns, machetes and knives. Many of the poor victims feared for their lives and the terror continues to haunt some of them.

The families and shop staff endured horrific ordeals at the hands of the ruthless gang who always came brandishing an array of guns and knives in the faces of the shocked victims.

Police arrested the Rotheros alongside accomplices Aaron Jones and Tyler Greenway from a stolen VW Golf on 11 April, the day after a burglary in Clent.

A key piece of evidence came from an unlikely source – a letter to the Tooth Fairy.

Surveillance officers watched the robbers visit a shop in the Jewellery Quarter where they tried pawning stolen jewellery.

A jewellery box was found in the Golf’s passenger door pocket which contained letters written by the victim’s children to the Tooth Fairy – and when examined returned a fingerprint hit to 19-year-old crook Corey.

The ruthless criminals were sentenced at Birmingham Crown Court on June 24 for their spree of violent crimes.

Nicky Rothero (35) from Austin Rise, Longbridge, and Corey Rothero from Borrowdale Road, Northfield, were jailed for 24 and 15 years respectively having admitted conspiracy to rob, burgle and steal.

Jones (28) – half-brother of Nicky Rothero and uncle to Corey – formerly of Stilthouse Grove, Northfield, was jailed for 27 years, while 19-year-old Tyler Greenway from Vineyard Road, Northfield, was given a 15-year term.

They admitted conspiracy to burgle and steal but denied involvement in the robberies. However, a jury found them guilty them following a seven-week trial.

Darren Sadler (41) from Dunbar Close, Bartley Green, had already been jailed for 10 years and eight months having been caught during a phone shop robbery. He was given an extra four years after admitting his role in six other commercial robberies.

The Rotheros, Jones and Sadler started their crime spree on 18 October 2018 when they held up a One Stop shop in Bristol Road South, Northfield, with knives and forced staff to open a cash machine.

They robbers replicated the raid at three more One Stop stores – at Vicarage Road and Broad Lane in Kings Heath and Castle Road West in Oldbury – and also struck at the Barnt Green pub in Rednal on 5 November when they grabbed takings.

On 2 December they threatened to stab staff at the EE phone shop in Bristol Road North before loading £60,000 worth of mobiles into a builder’s sack – and two weeks later took a cash drawer from Buzz Bingo in Rubery.

However, the crooked quartet came unstuck on 22 January 2019 during a robbery at Carphone Warehouse in Longbridge town centre.

Again they bagged around £40,000 worth of handsets but plain clothes officers were on duty nearby and rushed to the scene as brave passers-by helped detain Sadler. He was arrested from behind the wheel of a getaway car stolen eight days earlier in Halesowen.

The other three managed to flee – one of them encouraging an armed accomplice to “f***ing stab them” – but their days on the run were numbered.

Police later seized Nick Rothero’s phone and found a message he had received asking “what happened to that guy (Sadler) has he been at court”. Rothero replied “got a 12” to which the unknown person replied “gutted”.

The gang recruited Tyler Greenway to fill the void left by Sadler’s capture.

They went on to commit five home invasions – two in Halesowen plus others in Alvechurch, Barnt Green and Bromsgrove – and an attack on security guards as they arrived to fill up an ATM machine in Frankley Beeches Road, Northfield, on 8 March.

On that occasion they threatened to shoot the guards – with Nicky Rothero cocking his pistol several times and warning “I’m not joking” – before they made off with two cash boxes.

A Facebook message we subsequently found revealed Rothero Snr was asked “they get away with much”? He typed back “loads I think… was filling the cash machine so about 80 grand”.

Disappointingly for them, they later realised they had made off with two empty containers.

The gang committed what turned out to be their final robbery – at a rural barn conversion in Stoney Lane, Bromsgrove, on 4 April – when a family was confronted by Jones armed with a sawn-off shotgun.

Following the arrests police executed warrants at the homes of both Rotheros.

Detectives found nine designer watches – including Armani and Tissot – in Nicky’s bedroom drawers plus a decoder key used to steal vehicles, and a hunting knife used in several of the robberies.

During a search of Rothero junior’s home, officers recovered receipts in his name for pawned jewellery, including cash payments of £449 and £1,100 for two gold rings and another for £1,500. Balaclavas were also seized from his home.

“They struck at family homes, ones they suspected were affluent, at times when people were sitting down to dinner or caring for children. Their actions caused immeasurable distress to the victims and their families.

“We identified the group through forensic evidence we found DNA at some attacked premises – and extensive analysis of phone communication.

“We’ve taken some very dangerous men off the streets and they have rightly been jailed for a long period of time.”