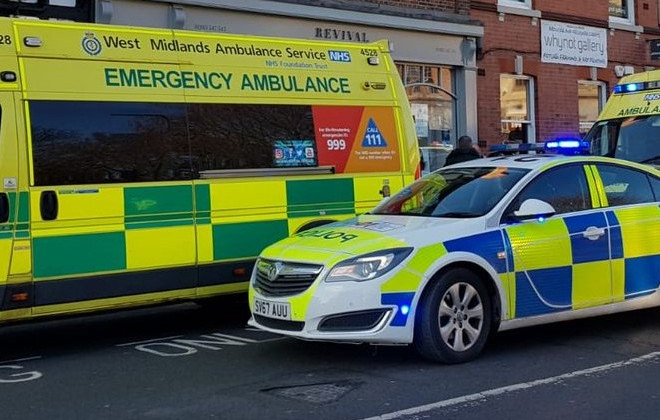 Two paramedics have been stabbed in Wolverhampton and taken to hospital, both have serious injuries (Photo: WMAS)

A man was today arrested on suspicion of wounding after two paramedics were attacked in Wolverhampton this afternoon.

The paramedics, one male and the other female, were conducting a safe and well check at a property on Stephens Close around 12.30pm when they were attacked by the occupant.

They were both stabbed – sustaining one stab wound each, one in the chest and one to the side – and have been taken to hospital with serious injuries where their condition is described as stable.

The paramedics were accompanied by a police officer who arrested the 52-year-old man at the scene. Police confirmed he will be questioned in due course.

A cordon has been placed around the property while enquiries continue.

West Midlands Police held a press conference at the scene of the attack this afternoon, with Supt. Simon Inglis and Assistant Chief Ambulance Officer Nathan Hudson from the West Midlands Ambulance Service (WMAS).

Superintendent Simon Inglis, from Wolverhampton Police, said: “This is a shocking incident resulting in serious injuries to two of our blue light colleagues.

“We are treating it as an isolated incident and we are not looking for anyone else in connection with the attack.”

#BREAKING | A man has been arrested after two paramedics were stabbed at a property in Stephens Close, Wolverhampton today. More to follow.

In a statement, a spokesperson for the West Midlands Ambulance Service added:

“Two members of ambulance service staff have been stabbed after attending a call out to check on the welfare of a man in Wolverhampton.

“Shortly after arrival, the crew used their emergency alert to say that they had been stabbed.

“Three additional ambulances, two Midlands Air Ambulances and the West Midlands Care Team attended the scene along with three paramedic officers. The two members of staff, both paramedics, have been treated at the scene by doctors and paramedics and have been taken to hospital for further treatment.

“A man who was tasered by police officers at the scene has also been treated by ambulance staff.”

“I hope the two paramedics recover swiftly and my thoughts are with them and their families.

“There is never an excuse to attack members of our emergency services.”

(Visited 156 times, 1 visits today)
https://www.iambirmingham.co.uk/2020/07/06/man-arrested-two-paramedics-stabbed-wolverhampton-serious-injuries/https://www.iambirmingham.co.uk/wp-content/uploads/2020/07/West-Midlands-Ambulance-Service-and-WMP-polcie-car-WMAS.jpghttps://www.iambirmingham.co.uk/wp-content/uploads/2020/07/West-Midlands-Ambulance-Service-and-WMP-polcie-car-WMAS-300x191.jpg2020-07-06T16:23:50+00:00Staff ReporterCrimeNewsarrest,arrested,Assistant Chief Ambulance Officer Nathan Hudson,Crime,critical,David Jamieson,Nathan Hudson,news,NHS,NHS WMAS,NHS workers,paramedics,Police,Police Crime Commissioner,police officers,Press Conference,serious injuries,Simon Inglis,Stabbing,stabbings,Superintendent Simon Inglis,two paramedics,West Midland Ambulance Service,West Midlands Police,WMAS,WMP,WMPCC,Wolverhampton,Wolverhampton Police,WolvesA man was today arrested on suspicion of wounding after two paramedics were attacked in Wolverhampton this afternoon. The paramedics, one male and the other female, were conducting a safe and well check at a property on Stephens Close around 12.30pm when they were attacked by the occupant. They were both stabbed -...Staff ReporterStaff Reporter[email protected]AdministratorI Am Birmingham
« Jewish and Muslim women join forces to remove antisemitic graffiti in Birmingham
Police hunt underway after driver viciously attacked in Erdington in broad daylight »