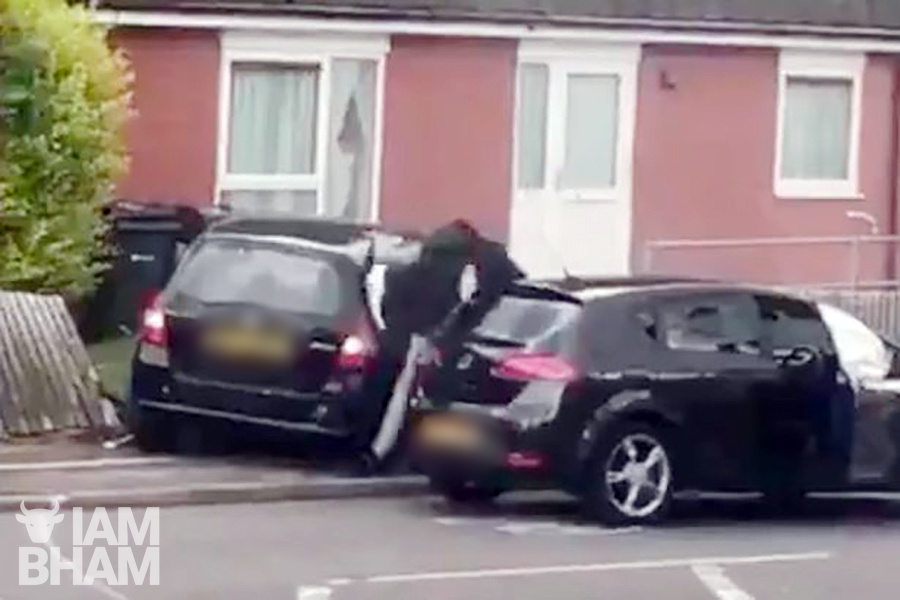 West Midlands Police are on the hunt for two men who viciously attacked a driver following a car crash in Erdington, a shocking incident which was caught on camera.

The young driver was brutally beaten by two thugs after two cars collided on Slade Road in the Birmingham ward last week.

Emergency services were called in response to the incident between two vehicles – a Seat Leon and a Honda Jazz.

Unbeknownst to the attackers, the entire episode was captured on camera and then posted on WhatsApp groups and social media.

In the footage, the 20-year-old victim is shown sitting in a black Honda Jazz which appears to have been forced off the main road by a Seat Leon. Smoke can be seen coming out of the static Honda, which sits partially on the pavement and partially in a local resident’s front garden.

The Seat is shown pulled up beside the Honda before, in a fit of rage, two men get out of the Seat and smash the Honda’s window before lunging into a violent attack, striking the driver several times.

A young man wearing a black hoodie can be seen repeatedly jabbing his arm into the driver’s side window of the Honda while the second man – dressed in grey jogging bottoms and a top with a black sleeveless jacket – also approaches the same vehicle and joins in with the aggressive assault.

The men are then shown surrounding both sides of the car to prevent the victim from leaving, before continuing the brutal attack on the driver.

The individual who captured the footage believes they are “stabbing” him, as his shock and horror can be heard in commentary over the one-minute video. While others on social media have repeated the claim and even suggested a hammer was used, West Midlands Police have stated the victim was attacked with a stick.

While the attack took place at around 12.30pm on Thursday 2 July, police only confirmed details after footage began circulating online.

The statement from police said: “We received a call just after 12.30pm on 2 July reporting a collision in Slade Road, Erdington, involving a black Seat Leon and a black Honda Jazz.

“It’s understood two men got out of the Leon, one threw an object at the Honda, smashing its window, before the 20-year-old victim was struck with a stick several times through the broken window. He suffered minor facial cuts. The two offenders made off from the scene and enquiries are underway to identify and trace the two men.

“If anyone was in the area at the time and saw the incident or the Seat Leon making off we’d urge them to contact us via Live Chat at our website or by calling 101. Alternatively call the charity Crimestoppers anonymously on 0800 555111.”