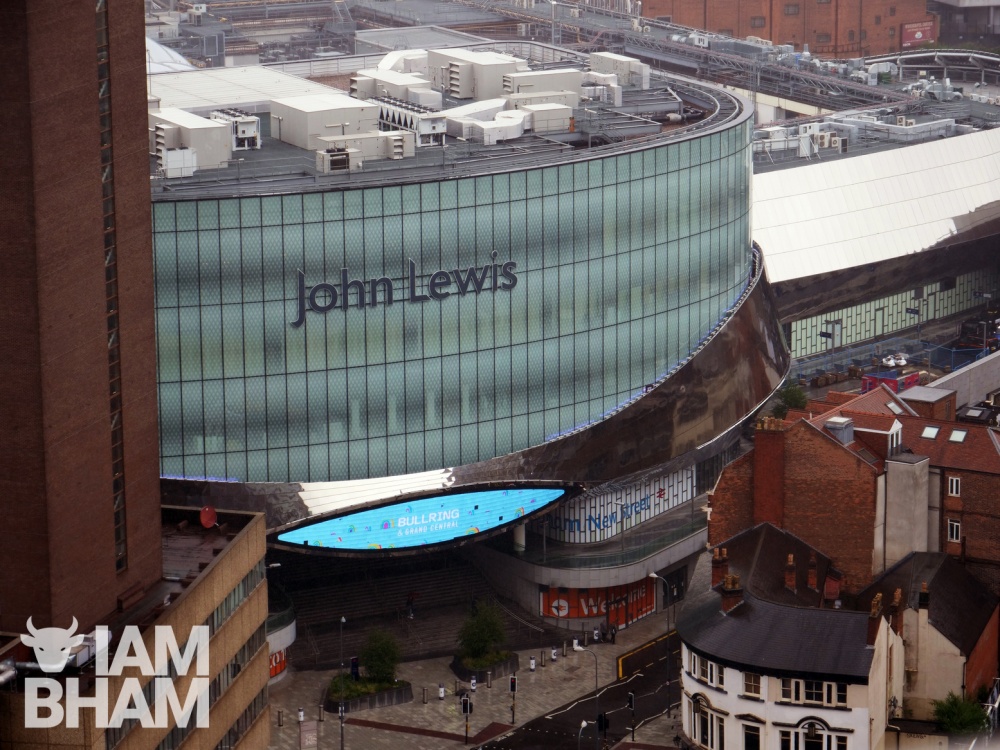 John Lewis has announced it is permanently closing its Birmingham department store in Grand Central, with no plans to reopen as the coronavirus lockdown eases.

The announcement comes a day after the chancellor made his “plan for jobs” announcement, hoping to revive a bruised economy.

The department store chain has confirmed eight of its stores will not reopen post-lockdown, including its flagship establishment in Birmingham which only opened in 2015, putting 1,300 jobs at risk nationally.

The employee-owned business said the coronavirus pandemic and subsequent lockdown resulted in more people shopping online rather than in-store, speeding up the risk factor to its business model.

Along with the company’s two full-size department stores in Birmingham and Watford; four smaller ‘At Home’ shops will close in Croydon, Newbury, Swindon and Tamworth; as well as two travel hub shops at Heathrow and St Pancras.

In a statement posted to Twitter, he wrote: “The proposed closure of John Lewis in Birmingham is incredibly disappointing news, and my thoughts are with all the partners and their families affected by this announcement.

“There is no question that the coronavirus pandemic has caused severe economic damage and uncertainty, but I still have enormous faith in Birmingham as a place to do business. The city is one of the top three in the whole of the UK for retail, with high footfall and many other retailers thriving in recent years.

“Against this backdrop, it is extremely disappointing that John Lewis & Partners has not been able to make a success of its flagship Birmingham store.

“But my belief in its potential is unwavering, and I still believe the store can not only be a great success, but also provide a brilliant retail offer for the city and the wider region.

“At this stage the closure is still only a proposal, and one which I believe risks being a dreadful mistake. Therefore I will be making the case for why the company should not give up this tremendous opportunity in Birmingham.”

The proposed closure of Birmingham’s John Lewis store risks being a dreadful mistake. My reaction to this morning’s deeply disappointing news: pic.twitter.com/JWLhPHBafw

It comes only a day after Chancellor Rishi Sunak announced a “plan for jobs” to help revive Britain’s damaged economy, which Street welcomed with an encouragement for the public to get back out and “start spending”.

John Lewis said that the eight shops confirmed for closure were already “financially challenged” prior to the coronavirus crisis.

Sharon White, chairman of the John Lewis Partnership, said: “Closing a shop is always incredibly difficult and today’s announcement will come as very sad news to customers and partners.

“However, we believe closures are necessary to help us secure the sustainability of the Partnership – and continue to meet the needs of our customers however and wherever they want to shop.

“Redundancies are always an absolute last resort and we will do everything we can to keep as many partners as possible within our business.”

Reaction in the region

“The onset of Covid-19 has exacerbated the ongoing difficulties faced by the retail sector and the unfortunate closures of stores up and down the country.

“It is sad to see that trends in the retail market have affected our region and the survival of an iconic brand like John Lewis – an important part of our city centre fabric and visitor offer.

“We are hopeful that Birmingham’s standing as the most significant retail hub outside of London positions the region strongly through this UK-wide period of uncertainty.”

Richard Butler, CBI West Midlands Regional Director, added: “This is a huge blow and its deeply disappointing that we are losing an iconic brand from Birmingham city centre.

“This shows the depth and breadth of the economic challenge facing Birmingham and the wider West Midlands.

A spokesman for the Bullring and Grand Central said: “We are disappointed in John Lewis & Partners’ decision not to re-open in the UK’s second city.

“They opened the store in 2015 as part of Grand Central’s £750m regeneration project and this September would have been their fifth year of trading.

“The Bullring Estate is a leading retail and leisure destination with shoppers and brands including Selfridges, which has been a draw for Birmingham for the past 17 years.

“Grand Central’s location in New Street Station attracts over 20m visitors a year as part of the busiest train station outside of London.

“We will continue our discussions with John Lewis regarding their future in Birmingham, as there remains a significant period left on the lease.

“However, the strong city centre and high footfall location of the current John Lewis space lends itself to future alternative uses, which we will explore.”

Birmingham Yardley MP Jess Phillips wrote: “Absolutely gutting that the Birmingham John Lewis will shut leaving a gaping whole in the newly developed part of town. Gutting for many of my constituents who work there. Here to help if people are worried.”

Absolutely gutting that the Birmingham John Lewis will shut leaving a gaping whole in the newly developed part of town. Gutting for many of my constituents who work there. Here to help if people are worried.

John Lewis had previously warned that not all of its outlets – 50 of which were closed when lockdown began – would reopen after the COVID-19 crisis eased, predicting a sales could slump of as much as 35% in a worst-case scenario. The store had previously been praised for reinventing its online sales arm, especially in the wake of fledgling sales at House of Fraser and Debenhams.

“The pandemic has accelerated the switch from shopping in-store to online,” a John Lewis spokesperson said.

“Before the virus struck, 40% of John Lewis sales were online. This could now be closer to 60-70% of total sales this year and next.”

The John Lewis job cuts are is the latest in a series of similar losses affecting thousands of workers across the country, affecting companies such as Pret A Manger, Royal Mail, BP and Airbus. Boots has also announced 4,000 jobs will go.

Other companies set to make job cuts during the pandemic include:

(Visited 544 times, 1 visits today)
https://www.iambirmingham.co.uk/2020/07/09/john-lewis-flagship-birmingham-store-close-company-announces-1300-jobs-risk/https://www.iambirmingham.co.uk/wp-content/uploads/2020/07/John-Lewish-department-store-at-Grand-Central-Birmingham-on-09.07.2020-by-Adam-Yosef-c-800x600.jpghttps://www.iambirmingham.co.uk/wp-content/uploads/2020/07/John-Lewish-department-store-at-Grand-Central-Birmingham-on-09.07.2020-by-Adam-Yosef-c-300x225.jpg2020-07-09T16:58:44+00:00Staff ReporterBusinessCoronavirusNewsRetailJohn Lewis has announced it is permanently closing its Birmingham department store in Grand Central, with no plans to reopen as the coronavirus lockdown eases. The announcement comes a day after the chancellor made his 'plan for jobs' announcement, hoping to revive a bruised economy. The department store chain has confirmed eight of...Staff ReporterStaff Reporter[email protected]AdministratorI Am Birmingham
« Drayton Manor Park reopens following coronavirus lockdown but with restrictions in place
Remembering Srebrenica virtual exhibition unveiled for 25th anniversary commemorations »