Over 50,000 back campaign to stop UK deportation of Smethwick woman Gurmit Kaur 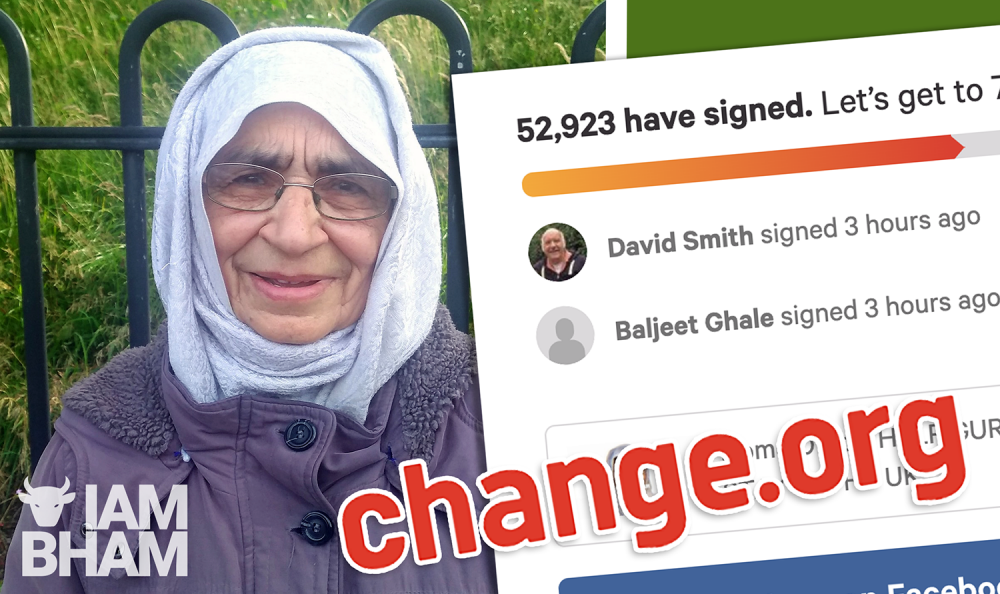 Over 50,000 people have signed a petition of support for Gurmit Kaur to stay in the UK

Over 50,000 people have signed an online petition calling for an elderly Smethwick woman to remain in the UK after she was threatened with deportation.

75-year-old Sikh woman Gurmit Kaur has received backing for her cause from people all over the world, amassing in excess of 50k signatures in under seven days, after I Am Birmingham broke the story last week.

Outraged friends and neighbours of Kaur have jumped to her defence after menacing letters threatening to “secure her removal” were sent to the senior citizen by the UK immigration authorities.

Septuagenarian Kaur, who has been living in Sandwell for over ten years but with no immigration papers, is a much-loved figure in her community and regularly volunteers at her local Sikh temple providing food for others.

Yet, in spite of her commitment to the community, immigration officials are demanding she either leaves voluntarily or risk being arrested and deported.

Legally an undocumented migrant, Home Office representatives have told Kaur to go back to India even though she claims she has no family there.

“We’re standing with Gurmit Kaur because, like so many undocumented migrants in the UK, this country is her home and she’s a deeply valued member of her community.

“We urge the Home Office to regularise her status, and that of all undocumented migrants in the UK, so that she and thousands like her can live without fear of being detained and deported, and protect themselves and their families, especially during this pandemic.”

The Home Office, however, claim they are not “pursuing deportation”, while Ms Kaur’s case worker believes their approach to this action has embraced threatening language.

“Our concern is that her status remains that she can and may be “forcibly removed”. Though we do not condone it, it is understandable that after such threats, people then do not pursue the Home Office.

“We’ve recently been contacted by Ms Kaur and we welcome the Home Office wanting to review her case. ”

Gurmit Kaur Sahota – known simply as Gurmit Kaur – lives in Smethwick in the West Midlands and has been residing in the UK for nearly eleven years.

An actively engaged member of her local community, Ms Kaur has been asked to leave the country by Home Office departments due to a lack of legal immigration paperwork.

According to a letter that was sent to her in 2013 by Capita Business Services on behalf of the UK Border Agency, she must leave the country or may be “forcibly removed”.

The letter states: “There are only a small minority of people living in the UK illegally. Despite numerous efforts to contact you by letter and telephone you have not responded and our records show that you have not yet left the United Kingdom.

“If you fail to respond we will have to refer your case onto the UK Border Agency to consider taking further action to secure your removal from the United Kingdom.

“In addition, anyone without a right to remain who does not voluntarily leave the United Kingdom could face severe penalties under the 1971 Immigration Act.”

The letter goes on to state Ms Kaur may lose access to NHS healthcare and have her details shared with regulatory authorities to prevent her from using financial services such as mobile phone companies and banks.

Critics of the hostile environment policy have hit out at the Home Office for criminalising long-term upstanding members of society like Ms Kaur by declaring them “illegal” rather than simply undocumented; and for using bullying tactics and fear in their approach to resolve her residency status.

In this particular case, the Home Office has accepted that the letter from Capita was sent to Ms Kaur, but noted it was from 2013. They explained their contract with Capita ended in 2016 and that they “no longer engage with individuals in this way”.

Responding to this story and Ms Kaur’s immigration status, the Home Office told I Am Birmingham they will look into the case but reiterated they were not actively “pursuing deportation”.

“Ms Kaur Sahota has made no attempt to regularise her stay or voluntarily leave the country since 2010.”

Representatives for the Home Office added they were unaware of any contact from their department with Ms Kaur since 2013 but said they were eager to “look into her case” when contact is made.

“We are happy to speak to Ms Kaur Sahota on next steps to resolve this matter.”

The campaign for her to get leave to remain has been launched with Migrant Voice, Brushstrokes and Gurdwara Baba Sang Ji – the temple where she volunteers.

An online petition opened on Sunday (July 19th) has already gained over 50,000 signatures in less than a week; with the hashtag #WeAreAllGurmitKaur trending on social media.

Her campaign has attracted support from local politicians and community leaders across the West Midlands.

Gurmit Kaur’s case and story was shared at a Black Lives Matter protest in Smethwick’s Victoria Park on earlier this month (July 18) where attendees came together to discuss systemic racism and discrimination against black and ethnic minority groups.

Organised by Stand Up To Racism Birmingham, the rally generated support for Kaur’s plight,  with several activists displaying ‘We Are All Gurmit Kaur’ signs as protesters cheered her on.

Birmingham activist Xi’an Loves met Gurmit Kaur at the Smethwick protest and immediately backed her campaign to stay in the country.

“While I was there I met a beautiful Auntie who was handing out fruit to protesters. Auntie’s name is Gurmit Kaur, she is 75-years-old and her story is heartbreaking.

“Over recent years Gurmit Kaur has suffered personal trauma and has lost everything including her home and family. To make matters worse she has now been informed by the Home Office that she has to return home to India, but her real home is here in Smethwick where she has lived since 2009 and has made a new life. She has no family to return to in Panjab.

“Today I am calling Gurmit Kaur my Massi Ji, she is our Auntie and she needs our help to ensure she stays in Smethwick.

“Auntie Gurmit Kaur arrived in the UK in 2009. Since then, she has given so much to our local community volunteering at her local Gurdwara. We ask the Home Office to do away with the hostile environment, the racism which gave rise to the Windrush scandal.

“The United Kingdom is the fifth wealthiest nation on Earth, communities of Smethwick have adopted auntie Gurmit Kaur, she has no family or friends in the Punjab, we ask the government to let her stay.

“The Prime Minister speaks frequently about British values, togetherness, generosity, giving back to the local community, these are the very qualities Auntie Gurmit embodies so why should she be turned away?

“I am really proud, over the past few months with the launch of Black Lives Matter Sandwell, borough of Sanctuary Sandwell, stand up to racism Sandwell, thousands of us are making a very powerful statement.

“These are all initiatives  significant in their own right but they are all efforts to bring our communities together, to welcome everyone regardless of their background. This is what Smethwick and Sandwell wants, we ask the thousands requesting her stay are listen to.

“The hostile environment must end now! We do not seek warm platitudes from the Home Office, confirm she is allowed to stay in the Smethwick community in which she belongs.

“If the Home Secretary is serious about learning lessons of the Windrush scandal, the hostile environment and the systemic racism that has plagued the highest offices of government, this is her [Home Secretary Priti Patel] opportunity to prove it!”

Campaigners have said they will continue protests until the Home Office allows Ms Kaur to stay in the country.

Activists say Kaur is a victim of the government’s ‘hostile environment’ policy, echoing similar experiences suffered by victims of the nation’s recent Windrush scandal, which has seen scores of Black Britons wrongly detained and deported to the Caribbean since 2018.

The Home Office policy is a set of administrative and legislative measures designed to make staying in the United Kingdom as difficult as possible for people without leave to remain.

Although first announced in 2012 under the Conservative-Liberal Democrat coalition by the then Home Secretary Theresa May, the measures were initially outlined by Birmingham MP Liam Byrne in May 2007, who was the Labour immigration minister at the time.

Proposing the need to “flush illegal migrants out“, Byrne said at the time, “We are trying to create a much more hostile environment in this country if you are here illegally”.

Adopted by the Conservatives, the policy has resulted in a political scandal resulting in British people of Caribbean descent being wrongly detained, denied legal rights and threatened with deportation; with at least 83 cases of actual unlawful deportations by the Home Office.

The vast majority of those affected had been born British subjects who arrived in the UK before 1973, as members of the “Windrush generation”. The deliberate targeting of this generation resulted in families being torn apart, and affected the health and wellbeing of mostly elderly individuals, some of whom have died before being granted reprieve or an apology.

The impact of the scandal has also extended to migrants from other Commonwealth countries, in this case the Indian subcontinent.