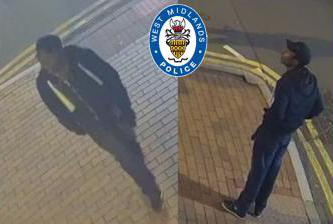 Police have issued CCTV footage of a suspect wanted in connection with the Birmingham stabbings (Photo: WMP)

West Midlands Police detectives have released footage of a man they want to speak to after a series of stabbings in Birmingham city centre in the early hours of this morning where one man died and seven other people were injured.

The vicious stabbing spree left a 23-year-old man dead after he suffered fatal injuries in Irving Street, in the Southside area of Birmingham.

The district suffered additional knife attacks in and around Hurst Street nearby. A man and a woman, aged 19 and 32, suffered critical injuries, and five other people, aged between 23 and 33, were also injured. They were treated in hospital and so far two have been discharged.

Extras officers have flooded the city centre as four scenes have been held throughout the day and forensic experts have examined each area.

The force received their first call to Constitution Hill just after 12.30am where a man received a superficial injury, followed by a further call 20 minutes later to Livery Street. A 19-year-old man was critically injured and a woman was also injured.

Several eye-witnesses to the violent rampage had previously described the suspect, while police officers and forensics scientists combed through evidence and trawled through hours of CCTV footage.

Video images now released of the knifeman piece together some of the tragic events of last night and show the suspect to be a Black man wearing a black hoodie, a black cap, dark jeans and dark shoes. The drawcords or drawstrings on the hoodie are distinctively white.

Earlier today, local business owner Savvas Sfrantzis gave reporters an identical description of the suspect, claiming that he had faced the assailant outside Mykonos bar and grill, which he runs in Hurst Street.

He told I Am Birmingham he had seen the suspect stabbing a young woman  before calmly walking off, but the suspect was then chased towards Bar Eden by police officers. He said the attacker had spoke to him before making his escape.

"I saw him stabbing her in the face… in 2 or 3 minutes the police were there. I could not believe it… the guy [killer] wasn't panicked, he looked like he didn't care. He was relaxed and just walked away."
– Savvas Sfrantzis, owner of Mykonos bar in Hurst Street #Birmingham pic.twitter.com/47LIsyzgUo

During a press conference at their West Midlands HQ this afternoon, police refrained from confirming a suspect or description of one, until they had checked CCTV evidence. Tonight, they have confirmed images of the person they are looking to speak to about the attacks.

Chief Superintendent Steve Graham said: “We do not underestimate the impact that these incidents have had on the city of Birmingham today. We declared this a major incident at the earliest opportunity and we have drafted in scores of officers to help with the investigation and patrol the city to reassure residents and visitors that we are doing all we can to apprehend the person responsible.

“We have worked throughout the day to trawl CCTV footage and speak to witnesses to ensure we release the best possible video and image of the man we want to speak to.

“At this stage we believe that the attacks were random and we have no indication of a motive. I would urge people to remain vigilant and report any suspicious behaviour to us.

“We are appealing for anyone who recognises the man in the footage to contact us urgently. We have a hotline number and a dedicated web page where you can submit information, photos and videos. If you see him, please do not approach him, but dial 999 immediately.”

Police have asked the public to upload any vital video footage or images they may have from the events surrounding the attacks here. Anyone wishing to call with information relating to these incidents can contact 0800 056 0944.