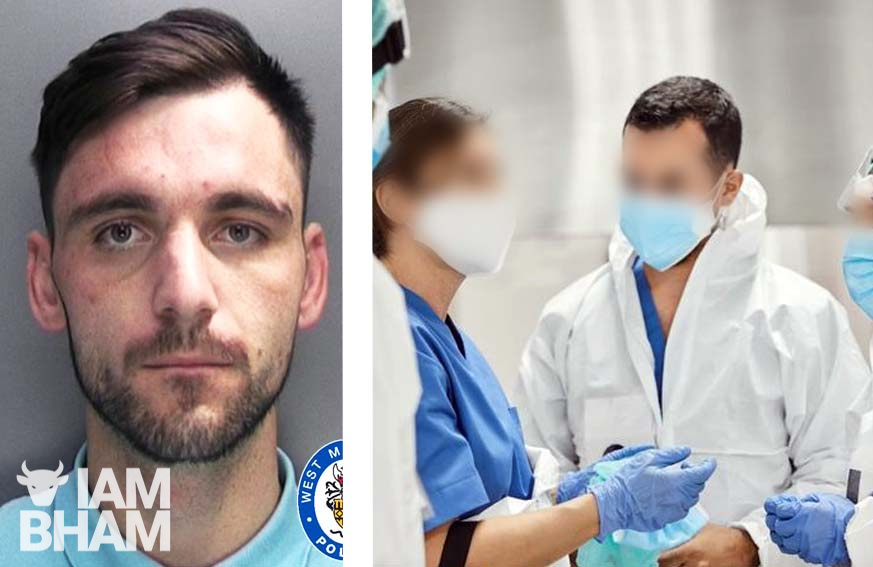 A Birmingham thief who broke into hospitals and care homes and stole from nurses while the rest of the nation applauded the hard work of NHS staff, has been jailed for four and a half years.

Prolific thief Wayne Bradley was arrested after a string of callous burglaries across Birmingham amidst the peak of the COVID-19 pandemic.

The 30-year-old from Kitts Gardens, Bartley Green, was found to have accessed four different hospitals and care homes in April this year – in the middle of the national lockdown.

Bradley conned and tailgated staff to get into unauthorised areas and stole property from nurses without any hesitation.

He had been handed a Criminal Behaviour Order (CBO) by Birmingham Crown Court in September 2018 after being found to have committed similar offences. He was banned from attending any hospital unless for an emergency or pre-arranged treatment until 2021, but this did not deter him.

On Wednesday 15 April, Bradley entered a restricted area within Birmingham Children’s Hospital and stole staff mobile phones. One of the victims challenged him, but he managed to make excuses and run away.

He was arrested and they started trawling CCTV of similar reports and found footage of him attending Solihull Hospital a week before and stealing a staff member’s purse. He had then gone on to nearby Tesco and Waitrose stores and began paying for his shopping with the stolen card.

On Saturday 11 April, he had also gained access to an elderly care complex in Bournville and stole two electronic tablets which he forcibly removed from their mounts. Two days later he went to Birmingham Children’s Hospital and wandered around hospital corridors, before managing to get into the heart unit to steal a laptop.

The day before he was caught on 15 April, he went to the city’s Women’s Hospital and was seen trying to gain entry to several departments, including intensive care. He managed to eventually steal a midwife’s personal phone from the ante-natal unit.

All of the offences Bradley was involved in meant he had breached not only national COVID-19 regulations, but also his CBO.

Yesterday (Wednesday 9 September), Bradley pleaded guilty at Birmingham Crown Court and was sentenced to four and a half years in prison for six burglary offences, three fraud offences, six breaches of his CBO and six breaches of coronavirus regulations.

Sergeant Julia Slater from the city centre team, said: “Bradley is a callous and uncaring career criminal who has gone out of his way to deliberately target the most vulnerable in society.

“While the rest of the country was in lockdown doing all they could to stop the spread of the virus, he was going out to steal from those people most at risk, and most shocking of all, to steal from the selfless members of the NHS who were putting their own safety on the line to help save others.

“Stealing from these groups would be heinous enough, but Bradley chose to do this at the height of the largest crisis the world has had to face in a generation, not caring who he might endanger or how upsetting it might be to his victims.

“We are pleased to see the courts agreed with us about the seriousness of Bradley’s offending, and this sentence should keep the public safe for the foreseeable future.”

(Visited 81 times, 2 visits today)
https://www.iambirmingham.co.uk/2020/09/10/birmingham-man-broke-hospitals-stole-nurses-covid-lockdown-jailed/https://www.iambirmingham.co.uk/wp-content/uploads/2020/09/Thief-Wayne-Bradley-stole-from-hospitals-and-nurses-during-COVID-19-lockdown-WMP-IAB-1-800x520.jpghttps://www.iambirmingham.co.uk/wp-content/uploads/2020/09/Thief-Wayne-Bradley-stole-from-hospitals-and-nurses-during-COVID-19-lockdown-WMP-IAB-1-300x195.jpg2020-09-14T00:42:07+00:00Staff ReporterCoronavirusCrimeHealthNewsApril 2020,Bartley Green,Birmingham,Birmingham Children's Hospital,Bournville,burglaries,burglary,care homes,Care Staff,CCTV,coronavirus,COVID,COVID-19,Crime,Hospital,key workers,Kitts Gardens,lockdown,news,NHS,NHS staff,nurses,pandemic,Police,sentenced,Theft,thief,Wayne Bradley,West Midlands,West Midlands Police,WMP,Women’s HospitalA Birmingham thief who broke into hospitals and care homes and stole from nurses while the rest of the nation applauded the hard work of NHS staff, has been jailed for four and a half years. Prolific thief Wayne Bradley was arrested after a string of callous burglaries across Birmingham...Staff ReporterStaff Reporter[email protected]AdministratorI Am Birmingham
« Writing competition launched for women from Birmingham, Bangladesh and Pakistan
Church gunman suspect arrested after flat raid in Walsall »