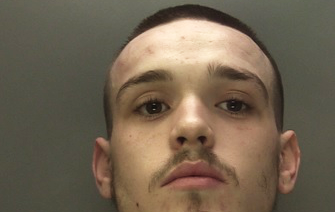 A savage off-road biker who killed a care worker has been jailed for nine years (Photo: WMP)

A vicious off-road biker was found guilty of manslaughter after he fatally punched a man who challenged him over his dangerous and reckless riding.

James Rowley was tearing up grassland off Jubilee Crescent, Coventry, on a stolen scrambler on 17 March when he was approached by care manager Thady ‘Joe’ Higgins who tragically lost his life at the hands of the antisocial thug.

Witnesses at the scene of the savage attack described seeing Rowley “showing off” and speeding through residential streets, jumping red lights and mounting pavements with his stolen off-road bike. He caused havoc and left pedestrians terrified with his reckless driving.

A police spokesperson said that at one point Rowley got into a row with a motorist after nearly causing a crash at traffic lights.

Rowley, 20, continued with his reckless driving despite the fear and trauma he was causing to members of the pubic.

Mr Higgins, 41, a care worker and a stepfather-of-three, was celebrating St Patrick’s Day with his family and friends when he noticed the reckless Rowley mounting pavements with his off-road bike and causing panic. Mr Higgins was described by family and friends as a “peacemaker and gentle giant” who always took an interest in the wellbeing of the community.

When he saw Rowley riding the stolen off-road bike on the pavement Mr Higgins feared for the safety of young children playing outside and urged Rowley to cease his dangerous driving.

Rowley responded by revving the bike’s engine – the spinning wheels showering Mr Higgins and a friend with dirt – before flooring his victim with a savage punch to the head.

The poor victim suffered a serious head injury and tragically died the following day in hospital.

Rowley picked up Mr Higgins’ St Patrick’s Day hat “as a trophy” and danced while wearing it and then was heard laughing as he sped away on the stolen bike.

The shocking incident was also witnessed by children who were out with families to celebrate St Patrick’s Day.

Police launched a murder enquiry and appealed to the local community to name the killer.

Rowley, from Bowness Close, Radford, Coventry, was in police custody a few days after the brutal killing of Mr Higgins.

When Rowley was interviewed by police he began to spin a web of lies. The heartless killer falsely claimed Mr Higgins approached in an aggressive manner shouting “I’m gonna do you”. Rowley lied to officers and said he only threw a punch in “self-defence”.

Rowley continued with his long line of lies and described himself as a dad and the “softest, nicest guy you ever come across”.

However, Rowley has a record of violence as a child. The victims of his abuse and violent attacks include family members.

Police have revealed that Rowley launched a disturbing assault when he was just 14 when he grabbed his mother round the throat, slapped her viciously across the face and later told detectives “she needs a bullet between her eyes”.

The CCTV and social media footage obtained obtained by the police, plus accounts provided by witnesses, contradicted Rowley’s version of events.

His string of lies were exposed and the evidence mounted against Rowley.

In the face of compelling evidence Rowley later changed his account and went on to admit manslaughter and dangerous driving.

At Leamington Justice Centre on 21 September he was jailed for nine years.

He added: “Joe grew up in the area and didn’t like people disrespecting his community. Witnesses describe him approaching Rowley politely; he wanted to convey his concerns for the danger he posed to people.

“Some witnesses described seeing Rowley laughing and dancing in the victim’s hat after the fatal punch. Rowley’s violence was witnessed by several children in the street.

“My sympathies remain with Mr Higgins’ friends and family.”