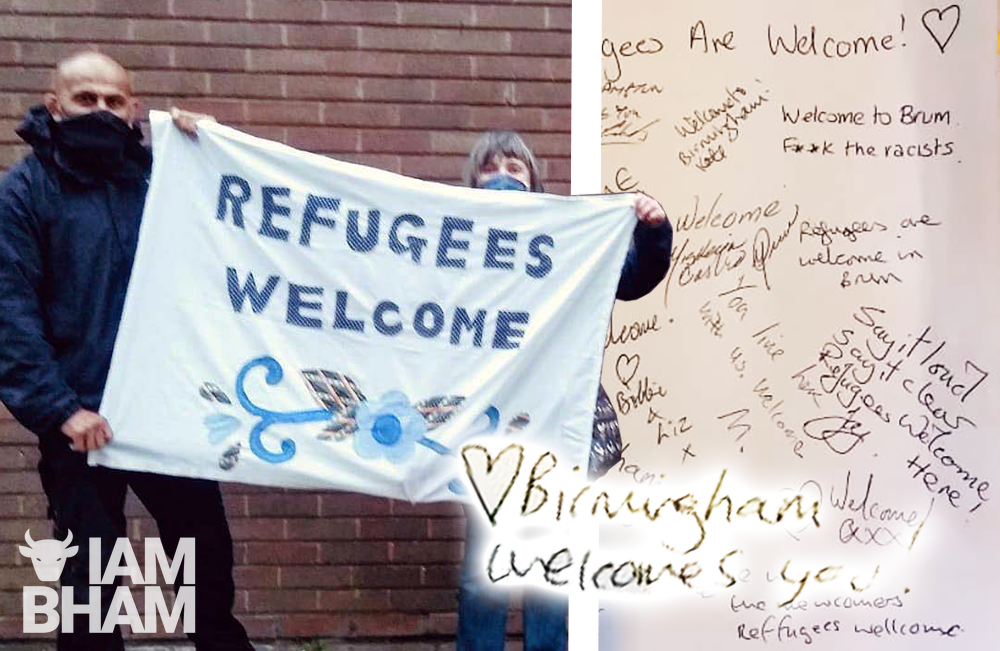 Residents from across the Midlands are joining forces to welcome refugees and asylum seekers to the region, after a spate of hotel invasions were carried out by “far-right thugs” hoping to to intimidate migrants being housed inside.

Local citizens groups and community activists have been coming together to show solidarity for vulnerable migrants by providing a visible supportive presence in areas that have been targeted by right-wing groups.

Extremist groups including Britain First have been targeting hotels housing asylum seekers across the country with the aim of capitalising on hostility sparked by a rise in English Channel crossings.

Police have been called to several incidents – including to a hotel in Bromsgrove – where members of the fanatical organisation have filmed themselves harassing migrants who had been placed in emergency accommodation due to the coronavirus pandemic.

While a number of areas in the Midlands have been targeted by the hate groups, local residents have had other thoughts on the matter and have come out to defy the campaign of intimidation.

In the latest action by anti-racist campaigners, a welcome card signed by people living in the area and a banner welcoming refugees was presented at a local accommodation centre housing refugees. The centre is not being named for fear of reprisals from right-wing gangs.

Speaking during the peace vigil, he said: “We support all residents, our areas are places of welcome and we reject the hate peddled by far-right outsiders, everyone deserves to live without the fear of these far-right thugs”

Local teacher and union representative Doug Morgan has also been backing the action, and held a “Refugees Welcome” banner as local drivers honked their horns in support.

He said: “Britain First came to say our area rejects refugees, so we went to the local streets to test this, rather than rejection we had welcome. We had a card asking people to sign welcoming refugees, everyone signed it!”

Campaigners say they are defending migrants in the wake of “the Government’s ratcheting up of the hostile environment where there are discussions around putting asylum seekers on old ferries” and are calling for a more welcoming environment in their towns and cities.

Extreme right-wing groups have been targeting hotels housing asylum seekers across Britain in an attempt to capitalise on a rise in hostility triggered by news of recent English Channel crossings.

Police have been called to several incidents where members of far-right organisations have filmed themselves harassing migrants in hotels, many of whom have been placed in emergency accommodation due the coronavirus pandemic.

A number of videos posted online show these groups entering hotels that accommodate asylum seekers, knock on their doors and then go on to interrogate them while accusing them of wasting taxpayers’ money and being a burden on British society.

In a video posted to social media by Britain First – the dwindling organisation led by Paul Golding – members of the far-right outfit are shown entering a hotel in Bromsgrove and banging on bedroom doors, demanding to know what country the asylum seekers are from while ranting about the hotel housing “illegal immigrants”.

The video reveals the identities of several asylum seekers despite this putting them at possible risk.

In a similar incident, police were called out after Golding and a group of supporters attempted to enter a Holiday Inn near London on Saturday 22 August, where they filmed asylum seekers through windows and threateningly approached individuals entering and leaving the building.

The group then attempted to pull the same stunt at a hotel in Essex to which police had to yet again respond.

A spokesperson for West Mercia police said of the Bromsgrove incident: “Officers were called to a report of a group of people who had gained access to the Bromsgrove hotel at just after 7.30pm on Thursday 20 August. The individuals had left the premises prior to police arrival and no criminal offences have been reported.”

In another attempted invasion, Britain First turned up at a “COVID Protect” homeless shelter and “attempted to gain entry and demanded to know if the facility was housing asylum seekers”, according to the Greater London Authority’s (GLA).

Britain First leader Paul Golding, who was convicted of a terror offence earlier this year, failed to disclose this mishap to his supporters following the potentially dangerous gaffe.

Salman Mirza from national charity Migrant Voice said the asylum seekers had already been through a great deal of trauma and didn’t need additional disturbing confrontations.

“Haven’t these folks suffered enough without having to be subject to bigots who aren’t even living locally?

“Refugees are welcome and they need our support. It’s important that local communities are coming together to challenge the far-right racists causing trouble in our cities.”

Violent attacks on migrant accommodation have been recorded in Sweden, Germany and Greece since the start of the Mediterranean refugee crisis in 2014; including a number of arson attacks.

While there hasn’t been significant violence reported in Britain recently, a man was arrested for reportedly attacking a migrant on a Kent beach in August (Sunday 16), after the migrant had crossed the English Channel in a rubber dinghy to get to safety.

The latest intimidation tactics being deployed on vulnerable migrants by far-right groups have forced the government to place protective measures around hotels housing asylum seekers, including barriers and fences.

A Home Office spokesperson said: “We take the wellbeing of asylum seekers extremely seriously. Any violence or abuse directed towards asylum seekers is completely unacceptable.”