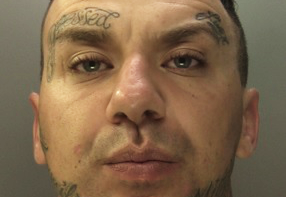 A serial thief who robbed two men at gunpoint in Birmingham city centre has been jailed (Photo: WMP)

A gun-toting violent racist thief who struck three times this year in multiple burglaries and robberies, has finally been apprehended and jailed for his horrific crimes.

Anton Maher, of no fixed address, started his crime spree in June by smashing his way through to a house on Carnwath Road in Sutton Coldfield where he ransacked the property, escaping with an array of sentimental jewellery, watches, champagne and binoculars.

The violent thug continued his criminal activities and in the early hours of Saturday 25 July, the 28-year-old approached two men in Temple Row, in Birmingham city centre, and asked them for a cigarette.

When the two individuals politely refused and tried to walk on, Maher began to hurl racist verbal abuse at the shocked men, before pulling out a firearm from his waistband and threatening them with it.

The heavily tattooed racist thug robbed one of the men by taking the victim’s mobile phone.

Maher then smashed the gun he was brandishing on the head of one of his victims. This resulted in the gun falling out of his hand and the cowardly mugger ran off with the victim’s phone.

The traumatized victims managed to pick up the gun and immediately contacted police with a detailed account of their terrifying ordeal.

Police officers inspected the firearm which Maher had used in his crime and discovered that it was an imitation weapon.

A police spokesperson stated that Maher was arrested soon after in the city centre, where he was found in possession of the stolen mobile phone belonging to one of the victims of the violent mugging.

Maher denied he had stolen the phone and immediately began to offer up a string of lies, and said he also had a similar phone, and had thought he had dropped it during a fight with some men who had attacked him in the city centre.

The criminal apparently tried to portray himself as the victim of an attack and pin the blame on the men he had racially abused and robbed.

Detectives charged Maher for the crime and also added the burglary in Sutton Coldfield to the list of charges after forensic officers found traces of his blood which connected the violent thief to the crime scene.

It was later found that the crook had also burgled a house in Skip Lane, Walsall on Tuesday 7 July, where a number of personal items were stolen.

At Birmingham Crown Court on Thursday 1 October, Maher pleaded guilty to the offences and was jailed for a total of seven years and six months. He will serve his time concurrently for robbery, possession of an imitation firearm and burglary.