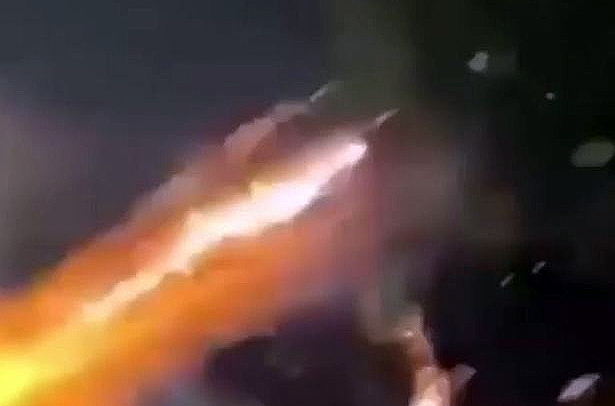 Police have launched an investigation after 40 rockets were fired as passers-by in Yardley, Birmingham

Police officers in Birmingham have launched an investigation after 40 rockets were fired at bystanders in Coventry Road in Birmingham.

West Midlands Police have started to look into the incident in response to shocking video footage showing a large firework being used to launch rockets at people in a “drive-by shooting”.

The clip has emerged on social media showing up to 40 flares being fired from a display-size firework as a car is driven in Yardley.

Members of the public are seen ducking for cover as the rockets are discharged through the car window near the Old Bill & Bull pub.

Police have warned the “firework louts” risk arrest as new shocking video emerges from the attack.

“We believe the footage was filmed in the last few days,” a spokesperson for West Midlands Police revealed.

“Officers have already carried out local enquiries and will be seizing CCTV for examination. We’re appealing for information and urging anyone who was in Coventry Road and was shot at with the firework to get in touch.”

It’s the latest in a series of shocking incidents, including one on Saturday (31 October) when rockets were launched at motorists and a police car in Cape Hill.

On that occasion a 16-year-old boy was detained and taken home after he was caught carrying fireworks; he will be voluntary interviewed at a later date.

The force has teamed up with West Midlands Fire Service to issue a stark warning about the dangers of fireworks misuse.

Inspector Simon Graham, in charge of policing in Yardley constituency, said: “The footage shows a large firework – the kind that would be used at public displays – effectively being used in a drive-by shooting as a potentially lethal weapon.

“Letting off fireworks in the street is hugely reckless. Had one of those rockets exploded in someone’s face we could be looking at a wounding investigation or even worse.

“This is not just people having some fun. What I’ve seen on the video is really dangerous and we will take action. Offenders are putting people in danger and they run the risk of being arrested and jailed.”

It’s against the law to set off or throw fireworks in the street or a public place, and for under 18s to buy or possess fireworks.

Area Commander Steve Vincent of West Midlands Fire Service added: “Fireworks are explosives, with the potential to cause serious burns and injury. People misusing them in this way need to think about the very real dangers to themselves and others.

“Our health colleagues are again under mounting pressure because of the pandemic. That’s why we’re asking everyone to think twice about using fireworks at all this year.”

Days ago, footage of another group of reckless thugs firing rockets at each other in Birmingham city centre was circulated on social media. In the video, a group of young men can be seen throwing explosive fireworks at each other, narrowly missing pedestrians and passing vehicles.

It has been reported that local residents near the area had contacted police about the incident but the footage or time and date of the incident have not yet been formally confirmed.