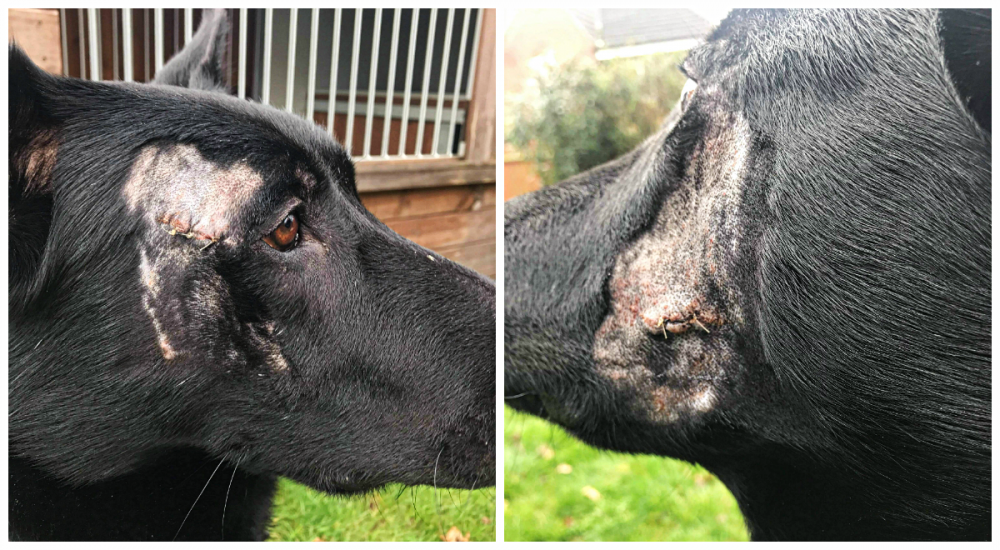 A brave police dog is healing after being stabbed in the head by a teenager armed with a machete (Photo: WMP)

A brave police dog called Stark is back at home recovering from a shocking machete attack by a teenager robbery suspect at the weekend in the Handsworth area of Birmingham.

Dog handler PC Paul Hopley was on the trail of suspected burglars at 4am on Saturday 14 November when a teenager emerged from his hiding place inside an allotments and lunged at Stark with a machete.

The teenager was reportedly attempting to escape the scene of the suspected robbery when he suddenly launched a violent attack on the police dog.

PC Hopley stated that he heard the thud of what he thought was a stick coming down repeatedly on three-year-old Stark’s head.

But as he ran to the dog’s aid it became clear the 16-year-old attacker was armed with a rusty machete which he was slashing at Stark’s head.

The faithful police dog was bleeding from several deep cuts to the head. The brave animal stayed focused and refused to give up the chase for the criminal.

PC Hopely said he quickly caught up and rugby tackled the teenage knifeman to the floor. Stark, despite his horrific injuries, helped detain the suspect in the allotments off Larch Avenue in Handsworth as support arrived.

Stark – a German Shepherd and Belgian Malinois cross – was sedated and underwent surgery to stitch together nasty wounds on either side of his face according to a police spokesperson.

Thankfully, the blade narrowly missed Stark’s right eye and vets have said he will recover and be back on the hunt for criminals.

“When I saw the wounds so close to Stark’s eye I feared the worst. I thought he could have been blinded in that eye,” said PC Hopley.

“We’d had reports of people with torches acting suspiciously behind houses. The allotments were big, lots of places to hide, but after around 20 minutes Stark sniffed out the suspect.

“He ran off but Stark chased him down. He struck Stark a few times with the machete but I managed to disorientate him with incapacitant spray and then tackle him to the floor.

“We’ve been together for 18 months now and are very much a team. We look out for each other. Stark did a great job and it’s a huge relief he’s going to be OK.

A 16-year-old youth from Birmingham was arrested on suspicion of knife possession and causing unnecessary suffering to a protected animal.

The suspect remains in hospital having undergone treatment for dog bites.

(Visited 1,731 times, 1 visits today)
https://www.iambirmingham.co.uk/2020/11/17/brave-police-dog-survives-savage-machete-attack-teenager-handsworth/https://www.iambirmingham.co.uk/wp-content/uploads/2020/11/Injury-collage_pea-800x440.pnghttps://www.iambirmingham.co.uk/wp-content/uploads/2020/11/Injury-collage_pea-300x165.png2020-11-17T20:01:03+00:00Rangzeb HussainAnimalsCrimeNews20/20,Attack,B'ham,Birmingham,Blade,Brum,Brummies,City,Crime,Dog,England,Handsworth,I Am Bham,I Am Birmingham,knife attack,knife crime,Larch Avenue,Midlands,news,offensive weapon,PC Paul Hopley,Police,Police Canine Unit,Police Dog Stark,possession,Rangzeb Hussain,robbery,RSPCA,Stab,Stabbing,Stark,teenager,UK,West Midlands,West Midlands Police,WMPA brave police dog called Stark is back at home recovering from a shocking machete attack by a teenager robbery suspect at the weekend in the Handsworth area of Birmingham. Dog handler PC Paul Hopley was on the trail of suspected burglars at 4am on Saturday 14 November when a...Rangzeb HussainRangzeb Hussain[email protected]AuthorI Am Birmingham
« Writing competition launched in Birmingham for pupils to send in stories about their heroes
‘Jealous’ thug pleads guilty to the brutal killing of Jagdev Lally in Sandwell »