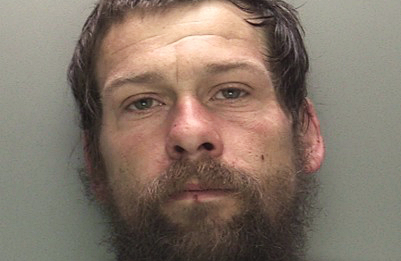 A violent thug has pleaded guilty to manslaughter after the man he brutally assaulted in ‘a fit of jealous rage’ died of his injuries in Sandwell.

The victim, Jagdev Lally, was rushed to hospital after he was found bleeding from a serious head wound by a passer-by in an alleyway near Tollgate shopping centre at around 9am on Tuesday 14 April.

An investigation by West Midlands Police discovered that the 38-year-old victim, who was reportedly sleeping rough at the time, had been attacked at around 3am by another homeless man identified as Ashley Pace.

In the attack described as ‘unprovoked’ by police, Mr Lally was viciously punched and kicked by Pace, and suffered serious head and facial injuries during the frenzied assault.

The poor victim was not discovered until around 9am by a passer-by who contacted emergency services.

Mr Lally tragically died around three weeks later in hospital on Friday 1 May.

A police spokesperson said that Mr Lally had allegedly laid down with some bedding in the area next to a woman in the early hours that morning and it is believed that when Pace arrived at the location and saw Mr Lally next to her, he had reacted with ‘jealously’ and ‘anger’ and launched a brutal attack on the victim.

Pace alleges that he felt rage upon spotting Mr Lally sleeping near his partner and unleashed his relentless attack.

CCTV captured the shocking assault which took place just off Smethwick High Street and police officers quickly traced and arrested Pace. The homeless perpetrator was initially charged with wounding but this was later changed to murder after the poor victim died.

A week-long trial was due to begin on Monday 23 November, but this week, 35-year-old Pace offered a guilty plea to manslaughter, which was accepted, and the trial took place at Wolverhampton Crown Court on Thursday 19th November.

The brutal death of Jagdev Lally left his family deeply shocked and they are still trying to come to terms with their loss and trying to understand what led to the horrifying attack.

Mr Lally’s family paid tribute to him and said:

“Jagdev was a loving father, son and brother.

“He was the sole provider for this parents in India, who are now totally lost without him.

“They, his son or sisters will never see him again.

“We need answers as to why someone would carry out this attack. We hope justice is served on the assailant so he realises what pain he has caused Jagdev and his family.

“To be taken at such a young age is difficult enough, but for it to be under such tragic circumstances is heartbreaking.”

“This was a vicious and unprovoked attack on a vulnerable man by someone who was simply not happy about where he had laid down to sleep.

“He was left with serious injuries after collapsing and never regained consciousness.

“I’d like to thank the member of the public who helped him and made sure he got to hospital. Sadly, he didn’t survive.

“Nothing will bring Mr Lally back to his family but I hope that seeing the person who caused this unexplainable pain being brought to justice is something that can offer them at least some comfort.”

Pace will be sentenced on Friday 15 January at Wolverhampton Crown Court.

(Visited 562 times, 1 visits today)
https://www.iambirmingham.co.uk/2020/11/21/homeless-thug-pleads-guilty-brutal-killing-jagdev-lally-sandwell/https://www.iambirmingham.co.uk/wp-content/uploads/2020/11/Ashley-Pace-wm_pe.pnghttps://www.iambirmingham.co.uk/wp-content/uploads/2020/11/Ashley-Pace-wm_pe-300x195.png2020-11-21T00:52:46+00:00Rangzeb HussainCrimeNews20/20,Ashley Pace,Asian,Assault,B'ham,Birmingham,Brum,Brummies,CCTV,community,Crime,Detective Inspector Jackie Nicholson,England,Force CID,Guilty,Homeless,I Am Bham,I Am Birmingham,India,Investigation,Jagdev Lally,Manslaughter,Midlands,murder,news,Police,Racism,Rangzeb Hussain,Sandwell,Smethwick,Smethwick High Street,Tollgate Shopping Centre,Trial,UK,West Midlands,West Midlands Police,WMP,Wolverhampton,Wolverhampton Crown CourtA violent thug has pleaded guilty to manslaughter after the man he brutally assaulted in 'a fit of jealous rage' died of his injuries in Sandwell. The victim, Jagdev Lally, was rushed to hospital after he was found bleeding from a serious head wound by a passer-by in an alleyway...Rangzeb HussainRangzeb Hussain[email protected]AuthorI Am Birmingham
« Brave police dog survives savage machete attack by teenager in Handsworth
Santa’s coming to town for festive fun at Birmingham Museums despite pandemic »