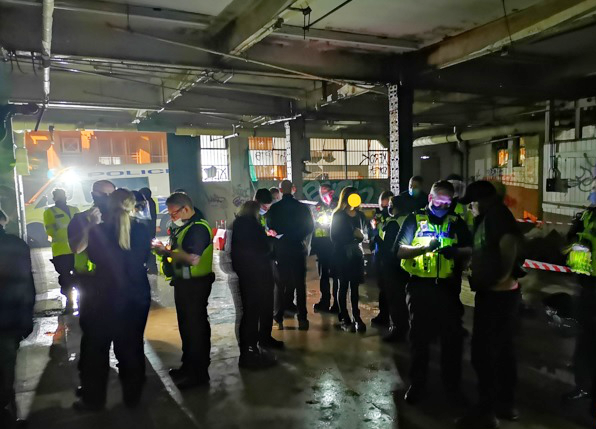 More than 100 fines issued at an illegal rave in Digbeth, Birmingham (Photo: WMP)

West Midlands Police have confirmed that over 100 lockdown violation fines were issued after officers broke up an illegal rave despite being pelted with missiles by the hostile crowd.

Police constables acted on information and discovered an unlawful music event being held in a disused warehouse in Birmingham last night (28 November) despite a COVID-19 lockdown in pace prohibiting such gatherings.

Officers were pelted with bottles as they forced their way into the illegal party in Bordesley Street, Digbeth, at around 9pm on Saturday night.

A police spokesperson stated that a 36-year-old man was arrested on suspicion of assault and a search of the site resulted in the recovery of Class A drugs.

The raid, which was named Operation Reliant, resulted with a shocking number of revelers being apprehended at the secret Digbeth location thought to be the derelict Typhoo Factory in Digbeth.

Around 150 people were rounded up and their details taken as officers issued fixed penalty notices to each individual who had breached lockdown restrictions. A fine of £200, to be paid within 28 days, was handed to each culprit.

Police also revealed that CCTV footage will be analysed and detectives are looking at pursuing further action regarding this unauthorised event which took place at a time when a national COVID-19 lockdown is in place.

Chief Superintendent Andy Beard said: “This was not only illegal, but extremely dangerous for both those who attended and officers.

“It’s extremely disappointing that some are still not grasping that such events only increase the risk of spreading a deadly virus.

“We’re currently under national restrictions and the region will then go into the highest tier due to the number of Covid cases next week.

“It’s unacceptable when people recklessly ignore the rules and put themselves and others at risk of catching the disease. It’s also unacceptable that officers should be attacked while going about their duties.

“We’ve seized equipment, drugs and a weapon and we’ll be looking to ensure there will be no repeat again.”

West Midlands Police also stated that a number of gatherings were shut down last night across the West Midlands region as Birmingham prepares to go into Tier 3 lockdown next Wednesday.