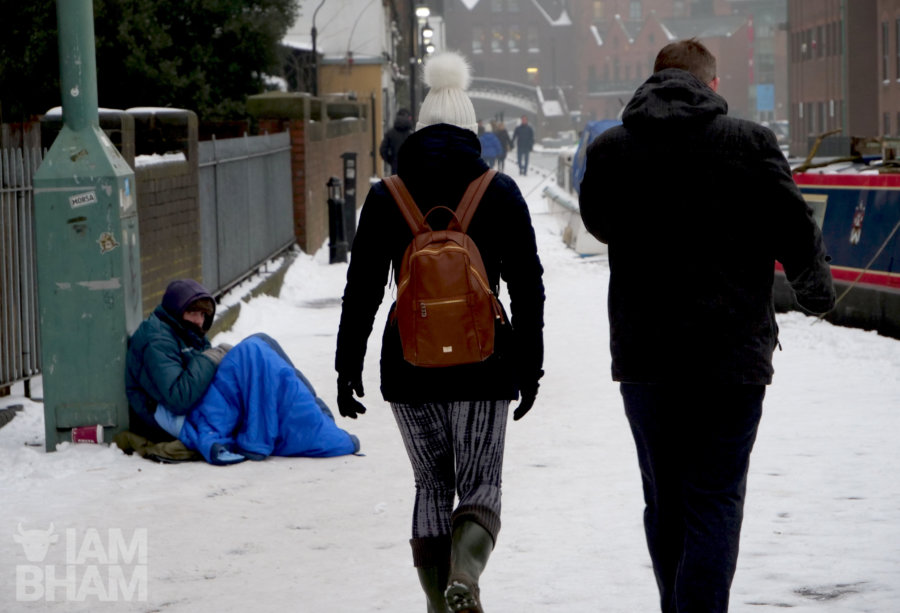 Councils from across the West Midlands are aiming to get rough sleepers off the street during the cold winter (Photo: Adam Yosef)

West Midlands Mayor Andy Street is once again joining forces with councils from across the region to protect rough sleepers from the bitter cold winter months ahead.

As rough sleepers face the double threat of harsh winter weather and the ongoing coronavirus pandemic, the region’s local authorities have come together to announce their joint winter plan for individuals at risk of rough sleeping.

On his election in May 2017, Andy Street pledged to make tackling homelessness and rough sleeping a priority. One of the first actions was the creation of a Homelessness Task Force which aims to ‘design out homelessness in the West Midlands’.

However, Street admitted last year that achieving this had been more difficult than planned during his tenure as West Midlands Mayor.

The combined plan is a commitment to keeping the most vulnerable people safe during winter to ensure that no one dies on the streets during severe weather.

Praising the initiative, Street said: “During the COVID-19 pandemic we have been able to make a significant impact to reduce the number of people sleeping rough.

“With tireless efforts by our region’s local authorities and our partners in the public, private and voluntary sectors, and with the support of government funding, we’ve been able to bring ‘Everyone In’ across the WMCA region. But as we enter the cold winter months, there can be no let-up in our determination to build on the progress that’s been made.

“We must maintain our efforts to protect those at risk of having to sleep rough – so that everyone can have a safe, secure and warm place to live. And as we work to ensure our region recovers from the economic impacts of the pandemic, we must make every effort to ensure no-one is left behind.”

For the third year running, local authorities and wider partners are coming together to ensure there is a coordinated regional response, which this year will include an ongoing offer of emergency accommodation and move-on support to reduce the risk of COVID-19 among individuals at risk of rough sleeping.

Through this winter and lockdown, councils have pledged “to ensure no one needs to sleep rough as additional accommodation will be open and every effort will be made to provide individuals with appropriate services to meet their needs and support them to move away from sleeping on the streets for good.”

They have said this commitment covers everyone, including pet owners, couples, those who have no recourse to public funds, people who may have previously been banned from support services, those with no local connection, and people with complex needs.

According to the WMCA, “Homelessness is most acute and recognisable when there is an accommodation crisis that needs an emergency intervention.”

While not all during winter months, 23 homeless reportedly died in Birmingham in 2018, according to government agency Office for National Statistics, in the last available annual figures for such deaths.

The shocking number was up from 18 people in the previous year, and has been steadily rising for most of the years since 2013.

Of these, 17 people who died in Birmingham in 2018 were officially identified as homeless but the Office for National Statistics believes that other people died in the city who were also homeless, despite not being officially listed as such.

In January 2019, homeless 31-year-old Kane Walker died while sleeping on the streets in Birmingham. In December 2016, another homeless man, believed to be just 30, died in freezing temperatures while rough sleeping in John Bright Street in the city.

In the West Midlands as a whole, 64 homeless people died in one year, with almost 24,000 people being homeless in the region, according to national charity Shelter.

The WMCA homelessness task force aims to “prevent such crises, wherever possible, through universal and targeted prevention, to intervene quickly and effectively with crisis prevention and relief, and to ensure the best pathway to recovery,  enabling people to move on to a settled home.”

West Midlands residents are also being urged to let local authorities know about anybody who they think may be rough sleeping. They can do this by contacting Streetlink to connect people sleeping rough to local support services.

Cllr Sharon Thompson, cabinet member for homes and neighbourhoods at Birmingham City Council and chair of the WMCA Homelessness Taskforce Members Advisory Group said, “Across the region, the pandemic has been a real game changer and has allowed us to make an overwhelmingly positive difference to the lives of those sleeping rough.

“In Birmingham alone, as part of the ‘Everyone In’ scheme we supported more than 140 vulnerable people into accommodation.

“We’ve also committed to continuing with this approach through the colder winter months. To ensure there is enough safe and secure bed space, we’ve commissioned an additional 900 bed nights of accommodation. It factors in the complex and multiple needs of individuals, conditions from cold weather including the severe weather emergency protocol and, all necessary considerations the pandemic brings with it.

“I’m really proud of the response our city has taken to ensuring the wellbeing of some of our most vulnerable citizens and we’ll continue to work with our partners across the region to reduce homelessness and rough sleeping.”

In Coventry, £2.3 million to build new long-term homes has been pledged for rough sleepers and other vulnerable people across the city, as part of government package worth more than £150m, to create thousands of new homes by end of March 2021.

Last month, Andy Street said the cash boost will build on the government’s ‘Everyone In’ campaign launched at the start of the pandemic, which has so far helped take 223 people who would have been sleeping rough or in a night shelter off Coventry’s streets between March and September.

Discussing the commitment, Street said: “I have always said that we need to work to ‘design out’ the root causes of homelessness, and we have made real progress here in the West Midlands.”

Cllr David Welsh, Coventry City Council cabinet member for housing and communities, said: “Voluntary and statutory services have been working harder than ever in Coventry in ensuring that people sleeping on the street have a bed and shelter.

“Any rough sleeper can access a bed whether our severe weather emergency protocol has been enacted or not and rough sleeper outreach workers are out with other agencies each day encouraging anyone, still sleeping on the street, to make use of the accommodation being offered.

“The community can help too by donating to Change Into Action. The donation scheme acts as a safe and secure way for members of the public and businesses to donate cash. Money goes towards rent payments, new clothes and other essentials that help people make the step from being on the streets into accommodation.”

The renewed plan to rehouse and protect the vulnerable from sleeping in the streets this winter will be enforced across the region, including in Birmingham, Coventry, Dudley, Walsall, Sandwell, Wolverhampton and Solihull.

To connect a rough sleeper with local services that can support them, please visit StreetLink here.