REVIEW: Tenet – a James Bond film in all but name 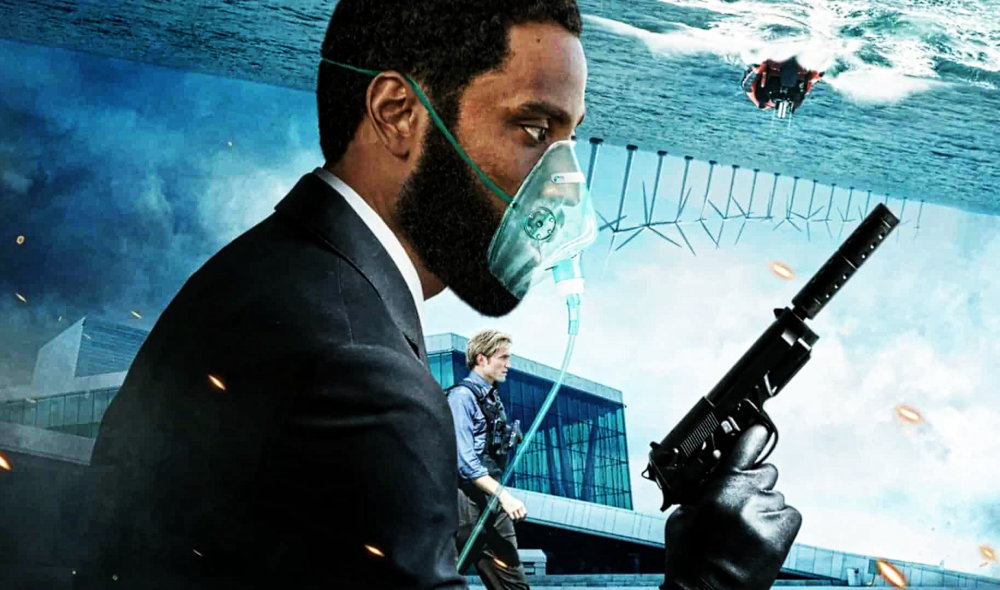 Christopher Nolan’s ‘Tenet’, a summer blockbuster which suffered a bumpy and short-lived screening in cinemas due to the COVID-19 lockdown, is being released on DVD, Bluray and streaming services this Christmas.

‘Tenet’ was designed to be seen and experienced on the biggest screens with the loudest sound systems during the summer blockbuster season but the film’s highly anticipated box office profit margin took a blow due to the pandemic restrictions.

Christopher Nolan’s new film ‘Tenet’ is a huge beast of a film which is bright and loud in every aspect, and it moves at breakneck speed, rarely pausing for air. It runs at full throttle, and only rests to dispense short sharp information in case the convoluted time travel plot sinks the narrative.

The movie opens with the debut of the new design of the iconic Warner Bros shield logo, coloured red, while the same logo – which bookends the film – is coloured blue for the end credits. The colour coding of the film production company logo reflects the ‘normal’ and ‘inverted’ time elements of the story.

Nolan has crafted an absolutely beautiful looking and highly polished film that seems to flow like a ‘Greatest Hits’ package of his previous works.

The time twisting narrative structure of his latest work mines his early film ‘Memento’, while the opening siege at the opera house mirrors the Joker’s bank heist in ‘The Dark Knight’, the oxygen helmets worn by the soldiers in ‘Tenet’ resemble Bane’s breathing apparatus in ‘The Dark Knight Rises’, and the climactic onslaught of the troops arriving in shipping containers is almost a reworking of the marines’ beach landings in ‘Dunkirk’. Some of the plot twists and turns seem to be lifted right out of the mind-warping techniques employed in Nolan’s ‘Inception’ and ‘Interstellar’. Even the sleight of hand misdirection elements in ‘The Prestige’ are visible in Nolan’s new film.

In an early section of the film a scientist tries to explain the complex scientific concept which allows time travel to the perplexed central character of the film named The Protagonist. She says, “Don’t try to understand it. Feel it”.

Nolan should have taken this advice himself and not tried to ‘explain’ the plot every now and then by having various characters taking moments to pause and offering up some sort of explanation to justify the ‘backwards-forwards’ structure of the film. It would have been far better if Nolan had trusted in the audience and let them ‘feel’ the audio-visual ambiance rather than underline and ‘explain’ the film’s awkward narrative.

Despite what some people have been saying about the time-bending story being too ‘dense’ and ‘difficult’ to understand, it’s actually a clear, and mostly linear, narrative when viewed without the cacophony of dialogue which tries to offer up scientific reasons about the nature of time. These pseudoscientific explanations only end up adding further confusion to an already overcooked story about a spy trying to avert the annihilation of mankind via a nuclear Armageddon.

Nolan also makes two other fundamental movie blunders that ultimately rob this film from reaching what could have been ‘classic’ status.

‘Tenet’ continues the director’s obsession with technical detail at the cost of human emotions. This film is an ice box when it comes to emotions, and it’s hard to invest warmth towards the characters. Most of the people who inhabit the world of ‘Tenet’ live their lives in sterile bubbles. Human warmth is kept under lock and key, and the disjointed momentum of the film also keeps the audience from engaging fully with the dramatic action scenes.

The second major flaw is the frantic action choreography. The fight sequences are integral to the plot but Nolan’s editing results in keeping the audience’s emotions at a distance. The scenes are thrilling but very fragmented and confusing. They fail to resonate or arouse passion because the technical ploy of playing them in ‘normal’ time, and then ‘inverting’ them, ends up diluting the visceral and emotional payoff.

This technique ends up making the climactic assault on the island very confusing. Nolan also adds further chaos by failing to visualise the enemy, and it becomes hard to work out who or what the army is attacking.

Without the emotional resonance, and lack of clarity in the editing of the fight choreography, the action sequences look distorted and jagged, flitting back and forth in the fabric of time.

Nolan has previously said he’s interested in directing a James Bond film. Well, ‘Tenet’ looks like the perfectly produced, and slick looking, calling card for Nolan’s dream to work on a 007 project.

‘Tenet’ looks and feels like an extremely expensive and kinetic 007 film in all but name. The film clings closely to its 007 landscape and takes espionage to some seriously unheard of places that revitalises the spy film genre, and The Protagonist, played by John David Washington (from Spike Lee’s ‘BlacKkKlansman’), looks like a very charismatic James Bond.

Nolan tries to veil and disguise his Bond film by stitching in a script that pretends to be intellectual, philosophical, complex, and cosmic but which, on closer inspection, is revealed to be nothing more than a convoluted spy film. The mask keeps slipping off ‘Tenet’ every now and then and it becomes almost impossible not to see the 007 references.

Hoyte van Hoytema (who was cinematographer for 007 film ‘Spectre’) dazzles the eyes with pulsating action-packed cinematography that is sensational and epic yet also intimate and confined in several key scenes. His vision captures and highlights the eye-popping prime colours used by the film’s art department and the movie looks rich and vivid like something out of a comic-book.

The ‘family friendly’ age rating also dilutes and hurts Nolan’s adult orientated film. However, to his credit, he uses clever film edits and sounds, including a disturbing performance by the film’s chief villain – Kenneth Branagh – to raise the level of threat and violence from a ‘safe’ family rating to a more ‘adult’ undertone without resorting to anything explicit in the visuals.

Sadly, even with his clever editing and ingenious placing of objects to mask-off the violence, and choreography which ‘disguises’ and tones down the brutal impact of the fights, the film was censored by the BBFC in the UK in order to achieve a 12A certificate.

The Hollywood film factory of the 21st century is very apprehensive of producing ’18’ or ‘R-Rated’ films.

The casting choices in ‘Tenet’ do full justice to the complex and demanding nature of the roles, and Nolan’s team of actors will undoubtedly receive nominations during awards season.

John David Washington, the aptly named ‘The Protagonist’ of the film, has the charisma and confidence to make the audience believe that this man has the determination and grit to save the world. It is so refreshing to see the role cast without any underlining of race. Nolan ensures the audience is hooked to the character, first and foremost, and skin colour never becomes an issue.

Robert Pattinson’s performance as an advisor and assistant to The Protagonist is edgy and complex, and it’s good to see him in a role where he has the freedom to juggle with understated humour. Shades of Pattison’s role as Bruce Wayne in the forthcoming ‘The Batman’ can be spotted here in Nolan’s film.

The smaller roles are also carefully cast by Nolan and actors with serious gravitas such as Michael Caine, Kenneth Branagh, and Aaron Taylor-Johnson work hard to make sure ‘Tenet’ flows smoothly without any acting hiccups.

One of the great casting decisions by Nolan was to entice Dimple Kapadia for the role of Priya, a woman married to an Indian arms dealer. Kapadia is a legendary icon of Indian cinema, and has appeared in landmark Bollywood films such as Raj Kapoor’s ‘Bobby’ (1973) when she was only 14 years old.

Her role in ‘Tenet’ is crafted with a delicate and regal touch which accentuates the mystery of her character in Nolan’s script. Kapadia’s plays the part of Priya with the perfect balance of strength and inner calm, never raising her voice. Her eyes and lips compel the audience to look for clues which might reveal her carefully veiled intentions. She keeps the audience guessing every step of the way.

Nolan’s carefully constructed world in ‘Tenet’ seems to ‘hush’ whenever Priya appears. Her spirit absolutely in tune with her surroundings. This inner and outer serenity is in sharp contrast to the other characters who always seem to be battling with time and space, and rarely finding balance or peace.

‘Tenet’ is a remarkable audio-visual experience and Nolan deserves to be acknowledged for his remarkable direction and vision. In the hands of a less technically experienced director this film had the potential to be a real disaster. The script is often unwieldy, and the world conjured up in ‘Tenet’ requires serious attention to detail to ensure the time-bending elements work cohesively.

The end credits proudly proclaim “This film was shot and finished on film” and it shows. There is no green screen fakery going on here, no strange and unreal looking CGI trickery.

‘Tenet’ astounds the eyes and the film feels ‘real’ with a real world aesthetic. The viewer absolutely ‘believes’ in the world conjured up by Nolan’s talented production crew.

The soundtrack is the pulsating heart and soul of this film. The thrilling ambiance of Vangelis’ soundtrack for ‘Blade Runner’ seems to have been the inspiration for the audio landscape of ‘Tenet’ by composer Ludwig Göransson.

The music lures the senses and glues the mind to the visuals in Nolan’s hypnotic and surreal film. The last film to use a soundtrack to such powerful and mesmerising effect was ‘1917’. Music and visuals are absolutely seared together. One cannot exist without the other. The effect is astounding and stirs the senses in a spectacular way. The heart begins to beat faster as the music throbs and rises, the sound perfectly synchronized to the dynamic action scenes.

‘Tenet’ is a film experience that compels the viewer to sit still and marvel at the audacious scale and jaw-dropping wizardry on display.

The film may lack emotional warmth, and it plays too many futile mind games trying to explain what is going on, yet despite this, Nolan’s movie is technically compelling and engaging in several key areas of the art of filmmaking.

This year’s Christmas James Bond film, which traditionally follows the Queen’s festive message, could well be ‘Tenet’ in some British households.

(Visited 802 times, 1 visits today)
https://www.iambirmingham.co.uk/2020/12/10/review-tenet-james-bond-film-name/https://www.iambirmingham.co.uk/wp-content/uploads/2020/12/tenet1_pe-800x472.pnghttps://www.iambirmingham.co.uk/wp-content/uploads/2020/12/tenet1_pe-300x177.png2020-12-11T07:20:02+00:00Rangzeb HussainEntertainmentFilmReviewsShowbiz007,4K,Actor,actress,Apple,B'ham,BBFC,Birmingham,blockbuster,Bluray,Bobby,Censorship,Character,Christmas,Christopher Nolan,Cinema,coronavirus,COVID-19,Dimple Kapadia,Director,DVD,Entertainment,Film,Film director,Hollywood,I Am Bham,I Am Birmingham,John David Washington,Kenneth Branagh,lockdown,Ludwig Göransson,Michael Caine,Movie,Nolan,Rangzeb Hussain,Robert Pattinson,streaming,TENET,UHD,UK,USA,VOD,Warner Bros. PicturesChristopher Nolan's 'Tenet', a summer blockbuster which suffered a bumpy and short-lived screening in cinemas due to the COVID-19 lockdown, is being released on DVD, Bluray and streaming services this Christmas. 'Tenet' was designed to be seen and experienced on the biggest screens with the loudest sound systems during the...Rangzeb HussainRangzeb Hussain[email protected]AuthorI Am Birmingham
« Hundreds tune in to watch Brummie chefs raise awareness for homelessness scheme
Photos revealed of planned 10-foot Wolverhampton memorial to 19th century Sikh soldiers »