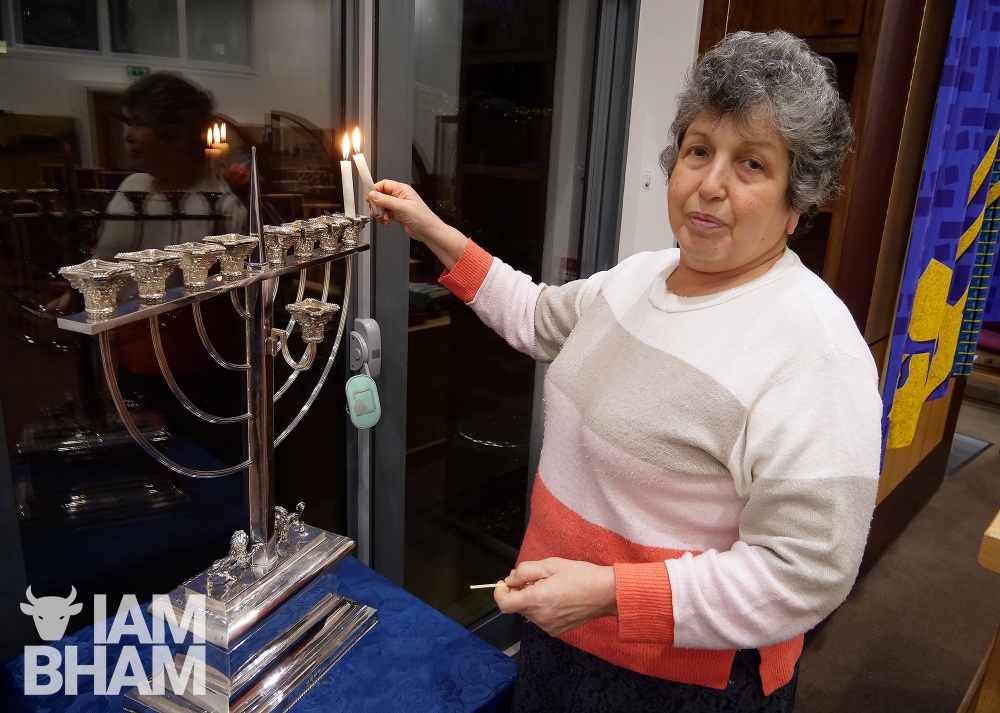 The Jewish festival of Hanukkah – also spelt ‘Chanukah’ –  began last night for Judaism’s faithful followers across the world, and it was no different in Birmingham and the West Midlands.

While festivities are less visible and quieter than usual due to national coronavirus restrictions, the region’s Jewish community continues to persevere and is marking the eight-day ‘Festival of Light’ as best as they can, combining limited activities in synagogues with more accessible services online.

Hanukkah – one of the most anticipated holidays in the Jewish calendar – marks and celebrates the tale of the Maccabees, who defeated the Greek King Antiochus’ troops after a three year war to protect their people from oppression and the restricting of their religious practices. This year falls on Thursday 10 December, ending on Friday 18 December.

King Antiochus tried to force Jews to pray and make sacrifices to Greek gods, banned circumcision and forbid the reading of Jewish holy texts and temple services. The festival commemorates the rededication of the Second Temple in Jerusalem after the 167-160 BCE revolt against the Seleucid Empire, which had targeted Judaism and Jewish communities.

To celebrate reclaiming the temple, returning Jews lit a lamp there but found they only had enough oil to keep it alight for a day. The miracle of Hanukkah is that the lamp stayed lit for eight days, despite the lack of oil.

To mark this miracle, Hanukkah is observed by lighting a menorah, a nine-pronged candelabra. This features one candle which sits separate from the others but is used to light eight others on the menorah; one for each night of the festival. This continues throughout Hanukkah until all flames are lit by the final night.

While some Jewish people choose to celebrate Hanukkah in a similar way to Christmas and Eid, by giving gifts and sharing meals with friends and family, there are many festivities unique to Hanukkah.

To symbolise the menorah miracle from the story of Hanukkah, oil plays a very important role in the festival, with many foods deep fried in oil, including potato latkes and sweet jelly doughnuts commonly known as Sufganiyot.

Children are often given chocolate coins known as ‘Hanukkah gelt’ and it is customary to spin a dreidel, a four-sided spinning top, after lighting the candle each evening.

Special services usually take place each evening at the synagogue during Hanukkah, with the first and last night having key significance. This year, many of these services will take place online due to COVID-19 restrictions, allowing members of the Jewish community to take part virtually.

In Birmingham, all of the Jewish community’s major festivals have been impacted by COVID-19 during the lockdown and subsequent government-enforced tier system regulations. With the city currently under Tier-3 rules, synagogues can only accommodate a limited number of worshippers. For most Jewish places of worship, this has meant keeping the doors closed and holding events online.

At Birmingham Central Synagogue in Edgbaston, staff and members are combining both physical and virtual activities. With seating rearranged, everything thoroughly and repeatedly wiped down, and with hand sanitiser and wipes dotted around the venue; the congregation can only gather in the main synagogue hall in very limited number.

“So this synagogue has a fair number of members, about 150 members, and there are synagogue services here twice a day, and on the sabbath and holidays,” explains Jewish West Midlands community leader Ruth Jacobs.

“So people come here at the moment, you can see it’s set out for the COVID regulations and we can sit and accommodate 34 people in this space, as per the regulations. Otherwise when it’s normally set up, it could be for 120.”

According to Ruth, who is an active member at the synagogue and Central Shul, limitations throughout the year have had a significant impact on the city’s Jewish community.

“It’s been very difficult, I mean we haven’t had a single festival since March that we’ve been able to celebrate with family and friends.

“The Passover, Shavuot, the high holy days of Rosh Hashanah and Yom Kippurs and Sukkot, we’ve had to celebrate them
on our own; and when we’ve been able to come to the synagogue for the service, that’s been nice to see people, albeit it socially
distanced but we haven’t been able to do the traditional sort of entertaining of family and friends in our own home, so it’s been very hard.”

However, the synagogue has been able to open this year as it also runs an in-house deli, where essential food items are stocked.

“We have our own deli here which serves the whole of the community across the West Midlands and beyond, people come from beyond for that.