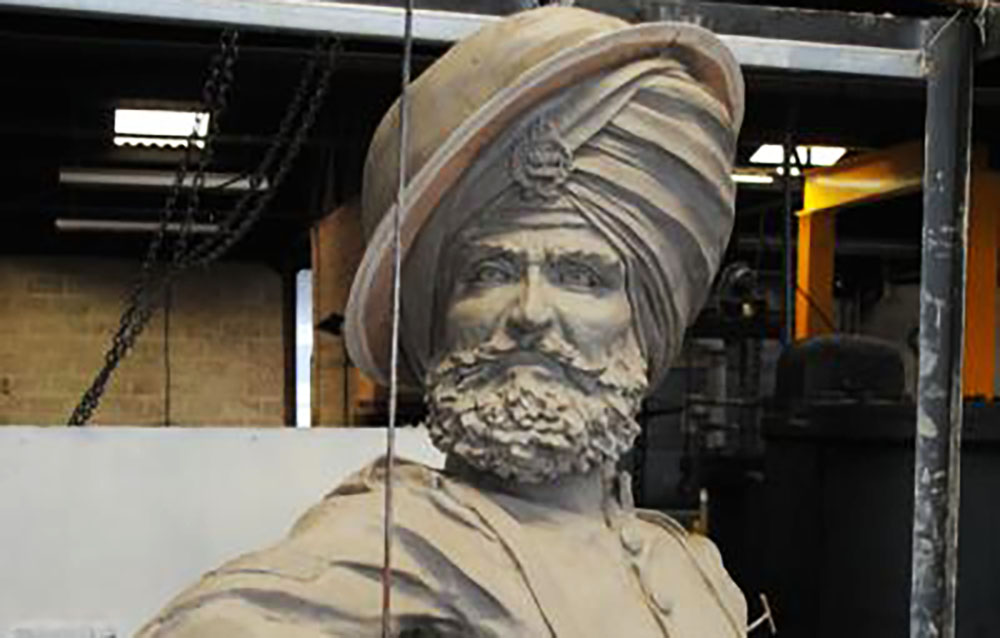 Images have been revealed of a new memorial planned for Wednesfield which commemorates the bravery of 19th century Sikh soldiers.

Guru Nanak Gurdwara commissioned Black Country sculptor Luke Perry to develop the Saragarhi Monument on land close to the temple in Well Lane, with the City of Wolverhampton Council agreeing to the transfer of land for the statue.

Images of a clay model of the statue give a first impression of how the landmark memorial will look. Over the coming months, the model will be painted in wax and then cast in bronze. The completed statue will stand at 10 feet tall and will be officially unveiled in September next year.

Representatives from the Gurdwara approached the council with their plans for the statue which will commemorate the Battle of Saragarhi, a conflict which took place on 12 September,1897. The conflict saw 21 soldiers from the 36th Sikh Regiment of the British Indian Army fight against thousands of Afghan tribesmen.

The battle centered on an outpost in Saragarhi which was surrounded and attacked by the tribesmen. The 21 soldiers inside the outpost chose to fight to the death rather than surrender. A further man, believed to be a Muslim cook who was not enrolled as a solider, also died after choosing to join the battle to defend the outpost.

The conflict is considered by military historians to be one of the greatest last stands in history, with Saragarhi Day commemorated by the Indian Army’s 4th battalion of the Sikh regiment every year on 12 September. The statue in Wednesfield is also planned to be unveiled on this date in 2021.

The Saragarhi Monument will be placed on land close to the temple after members of the council’s cabinet resources panel agreed to transfer the council-owned land to the Gurdwara on a 99 year lease, subject to final terms being agreed.

Councillor Jacqueline Sweetman, Cabinet Member for City Assets and Housing at City of Wolverhampton Council, said she was pleased by the transfer of the community asset and by the images of the clay model.

“The latest pictures of the statue look impressive and I am looking forward to seeing the completed memorial. The Saragarhi Monument will be very important to a large number of people,” she said.

“The story of the conflict is a truly remarkable one and the statue will stand as a testament to the bravery and sacrifice of those who lost their lives that day.”

Wednesfield South Councillor Bhupinder Gakhal, who has worked to develop plans for the memorial, described the first look at the statue as very emotional. He said its creation was the thrilling end to a long journey, which dated back to a family trip to India in December 1980 and a calendar spotted on the wall of a bank.

“The picture on the calendar was in black and white, it was of old ruins and Sikh soldiers stood on guard. I was just transfixed on this photo and asked the bank manager what it was about,” he said.

“The bank manager looked at me over his spectacles and said, ‘Son that photo is of Saragarhi, it’s one of the famous last stands, it’s a part of your history, research it’ – and research I did.

“I am thrilled that the image I saw in that photograph all those years ago will now be commemorated in this wonderful memorial in Wednesfield for the community to appreciate and for more people to learn about the battle at Saragarhi.”

Sculptor Luke Perry said he believed the statue, which will stand on a six-foot plinth, could be the best he has ever made.

“Each commission that I create is inspired by the people I work with. My inspiration usually comes from the enthusiasm of the brilliant people who the work is about, or those who have drawn my attention to it through their own passion,” he said.

“With artworks like Saragarhi I want to create sculptures that are a visible marker of the under represented but vital, real people in our communities because when you represent people you empower them.

“That power gives people the confidence to make positive change. When you build a monument, you make a statement that has its literal foundations in the bedrock of our nation, these statements are real and permanent.”

What was the Battle of Saragarhi?

The Battle of Saragarhi was a last-stand battle fought before the Tirah Campaign on 12 September 1897, between the British Raj and Afghan tribesmen. Saragarhi was a small village in the border district of Kohat, situated on the Samana Range, in present-day Pakistan.

On 12 September 1897, an estimated 12,000 – 24,000 Orakzai and Afridi tribesmen were seen near Gogra, at Samana Suk, and around Saragarhi, cutting off Fort Gulistan from Fort Lockhart. The Afghans attacked the outpost of Saragarhi where thousands of them swarmed and surrounded the fort, preparing to assault it.

Led by Havildar Ishar Singh, the soldiers in the fort—all of whom were Sikhs—chose to fight to the death, in what is considered by some military historians as one of the greatest last stands in history. The post was recaptured two days later by another British Indian contingent.

The battle has become iconic of eastern military civilisation, the British Empire’s military history and Sikh history. The modern Sikh Regiment of the Indian Army continues to commemorate the Battle of Saragarhi on 12 September each year as the Regimental Battle Honours Day.

Who is sculptor Luke Perry?

Luke Perry is a Black Country artist from the West Midlands, known for his monumental sculptures.

With a focus on celebrating industrial and underrepresented communities, particularly in the Black Country, Luke’s work has previously seen him create and unveil a powerful ‘Lions of the Great War’ statue in Sandwell, honouring Sikhs who fought in World War I.

He also co-presented the Channel 4 television series Titanic: The Mission, in which he and three other modern-day engineers attempted to rebuild sections of the ill-fated liner, using the tools and techniques of the early twentieth century.

Earlier this year, the artist created a 4-foot steel mesh angel sculpture in Bearwood, as a tribute to NHS and care staff bravely battling against the coronavirus pandemic.

A former alumni of Birmingham City University’s Institute of Creative Arts, Luke is founder and director of Industrial Heritage Stronghold, a not-for-profit organisation which aims to “build public artworks which celebrate our industrial heritage in a very real way”.

As part of his BA (Hons) Fine Art degree, Luke also made a number of short documentary films, one of which won the Bronze medal at the London International Short Film Festival.

As a result, he worked in the film industry after graduation for a short while but on realising his heart still lay in sculpture, he returned to his native Black Country, where he won his first commissions and set up Industrial Heritage Stronghold.