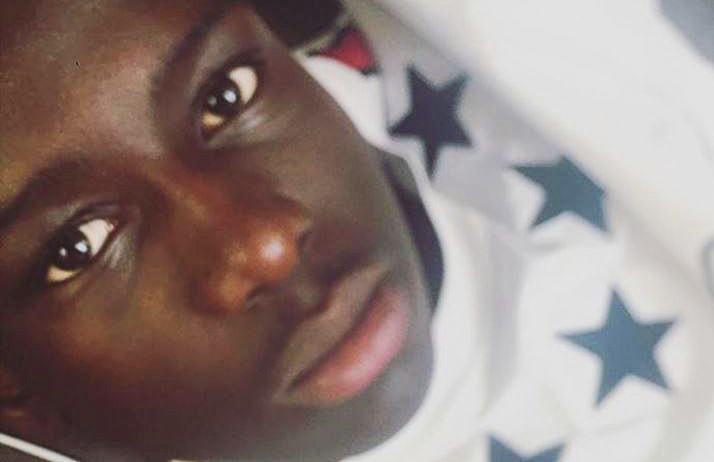 15-year-old schoolboy Babacar Diagne was stabbed to death because he was "at the wrong place, at the wrong time" (Photo: WMP)

Three children were convicted today (14 December) of the savage and “senseless” murder of a 15-year-old schoolboy who they ganged up on to stab almost 20 times in a Coventry park.

Babacar Diagne was knifed to death on grassland off Petitor Crescent, Wood End, on the evening of 5 February in an unprovoked attack.

None of the three attackers – two of whom were aged just 15 and the other 17 – had seen the poor victim before the senseless murder. The teenage killers had never even spoken to Babacar Diagne.

He was simply a new and unfamiliar face in their local community said a spokesperson for West Midlands Police. It was a brutal and totally senseless knife attack that took the life of a young schoolboy.

At Leamington Crown Court today (14 December) the teenagers were all found guilty of murder.

As they are all children – two now aged 16 – they cannot be legally named. However, the judge is considering an application to lift restrictions that will allow the killers to be identified.

The lead investigator of this hideous murder, Detective Chief Inspector Scott Griffiths, said: “There remains no clear motive for the savage killing other than Babacar was in the wrong place at the wrong time.

“He was new to Coventry, finding his feet. He wanted to make friends and to fit in. He was in a part of the city where his face wasn’t known and a stray glance has quickly escalated to murder.

“It’s totally shocking. These three children murdered a stranger; there was no bad blood between them.

“When the three offenders ran at Babacar there were no words exchanged. Babacar pleaded for them to stop but they continued to attack him as he lay defenceless on the floor.

“My officers have worked tirelessly on the case; it was a significant CCTV challenge to plot the movements of the killers. And I would like to praise the courage of witnesses who came forward to support the enquiry.

“They can be rightly proud that they have helped us secure justice for Babacar’s family.”

Babacar met up with friends at 6:15pm in Riley Square but quickly became concerned by a 15-year-old cyclist who was eying Babacar and circling around the group.

The cyclist then sped off and collected two friends from an address before all three cycled back to find Babacar.

Witnesses to the crime described the attack on the victim as “barbaric”. The witnesses initially thought Babacar was being repeatedly punched by the three attackers until they realized the ringleader of the group was holding a bloodied knife which he was ‘punching’ into the victim’s chest.

According to witnesses the attack on Babacar by the three teenagers was frenzied and relentless. They punched, kicked, and stabbed the poor victim and warned onlookers: “Don’t snitch, or you’ll get the same”.

After the shocking attack was over the three killers mounted their bicycles and rode away leaving Babacar fatally injured.

The tragic victim was found with 18 stab wounds, mostly to his torso and chest. He sadly died in the park.

At court today the QC for the prosecution, Sean Larkin, said: “They cycled into the park and up to Babacar Diagne, and they got off their bikes and they immediately carried out an unprovoked attack.

“Eye witnesses describe seeing what they thought were punches and kicks. They knocked him to the ground, but kept on.

“He got up and staggered off, and they attacked him again and knocked him to the ground and carried on with punches and kicks, and they finished with a kick to the head.”

Police spent hundreds of hours trawling through CCTV to plot the movement of the offenders before and after the murder in the park.

It was dark and some of the footage was grainy said police. However, despite the poor quality of the footage, detectives analysed the video in great detail, even noting the number and position of bike reflectors, to show it was the same group across each of the clips.

Police also seized CCTV footage showing the ringleader 24 hours before the murder riding a bike identical to the one used on the day of the attack.

Detectives discovered the 17-year-old killer went to his girlfriend’s home to change clothes following the stabbing and when arrested was found with injuries to his hands.

Police arrested all three in the days after Babacar’s death and charged them with murder.

Detectives also arrested a girl over the killing. Police have suspicions she made comments to the 15-year-old that stirred up trouble and may have contributed to the attack – but there was not enough evidence to charge and she was released.

He said: “I really want to express my gratitude to witnesses who provided crucial evidence in the case. They did the right thing to help us send out a message that this senseless violence has to stop.

“The whole of Coventry was shocked by Babacar’s death. Any violent crime is shocking but when the victim is of school age it’s all the more appalling and saddening.

“It’s important the whole community stands together to address the issue of youth violence. It has to stop; too many young lives are being lost and others ruined.”