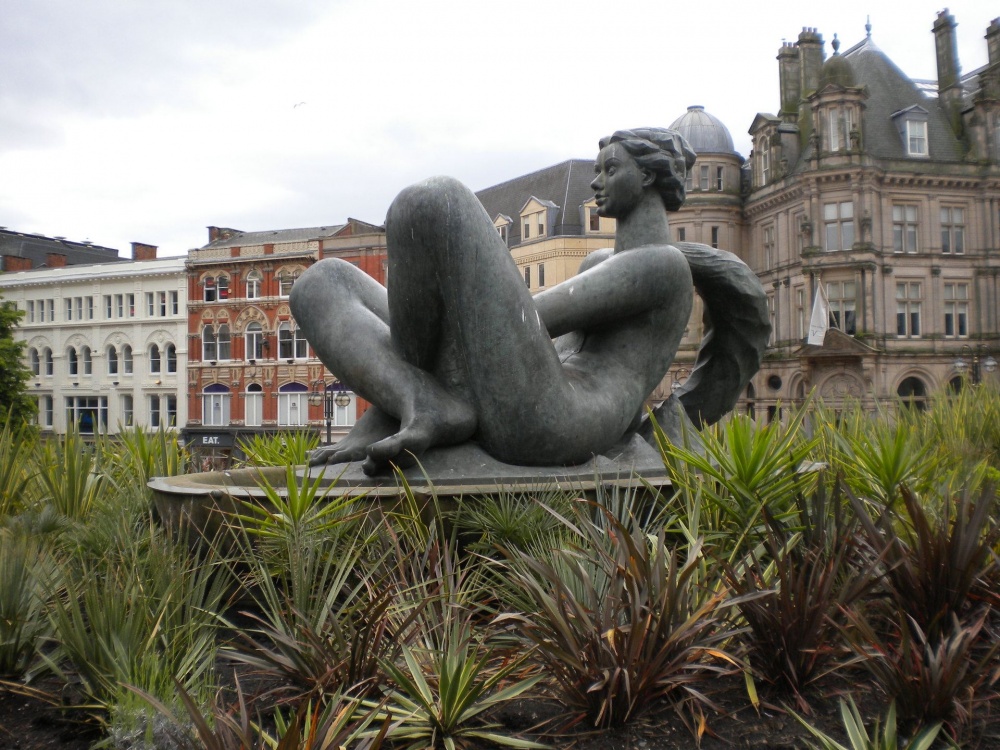 The River - aka "Floozie in the Jacuzzi" - in Victoria Square is set to become a working fountain once again (Photo: Jo Edkins)

A multi-million pound regeneration of Birmingham’s city centre – which includes bringing the ‘Floozie in the Jacuzzi’ back to life as a fountain – is set to be approved by Cabinet next week.

The full business case for the first phase of improvements – to be completed before the city welcomes around half a million more visitors during the Birmingham 2022 Commonwealth Games – will be discussed on 19 January 2021.

Work on the £12.395million first phase are set to begin in the summer, and will see improvements to Victoria Square, The River (the Floozie’s real name) sculpture repaired and reinstated as a fountain, along with improved security measures to replace current temporary arrangements.

It has been more than 25 years since significant improvements have been made to the city centre’s public spaces – Victoria Square was pedestrianised in 1993 – and this is set to be a very busy area by next summer when the Games are in full flow.

Cllr Ian Ward, Leader of Birmingham City Council, said: “Our city centre welcomes more than 42 million people a year and following the regeneration of Centenary Square and Paradise, it’s time for the business and retail areas to be revitalised.

“While improving public spaces in the city centre will enable us offer a world-class welcome to all for the Commonwealth Games, it will also support the economic recovery for businesses impacted by the COVID-19 pandemic.”

The initial phase of works will be carried out in two parts: the first includes the improvements to Victoria Square, The River fountain and installation of permanent security measures at seven locations.

The latter forms part of a comprehensive safety and security strategy for the city centre – replacing temporary measures which have been in situ for several years.

The second part of these works, which are set to be completed by October 2023, will see areas around Colmore Row and Waterloo Street made pedestrian and cyclist friendly.

The overall scheme’s budget of £20.478million is to be funded by £5million secured from the Government’s Transforming Cities Fund and the remaining £15.478million will be funded by Clean Air Zone revenues.

Should the funding identified not become available for Phase 1 works, use of corporate resources was approved within the council’s annual budget in February 2020.

The River, locally known as the “Floozie in the Jacuzzi”, is a large artwork located in Victoria Square in Birmingham.

Indian artist and sculptor Dhruva Mistry was selected to create the artwork after entering an international design competition for a central water feature in the square. He went on to create the centrepiece landmark and several surrounding art pieces.

Construction commenced in 1992 and was completed in 1994, when the square was officially reopened by Diana, Princess of Wales. The occasion has been immortalised in words engraved on a wall at the lower end of the square towards New Street.

The River features a 1.75-tonne bronze statue of a woman, 9 ft tall, 8 ft wide and 13 ft long, while the surrounding pool is paved with Wattscliff sandstone. Engraved in the rim of the upper pool are the following words from the poem Burnt Norton by T. S. Eliot:

When active as a fountain, the water in the pool flowed at a rate of 12,000 litres (3,000 gallons) per minute into a lower pool, in which is another bronze sculpture, Youth.

This smaller sculpture – also by Mistry – is 5 ft tall and 5 ft in diameter, depicting a boy and a girl facing each other at either end of a fountain. Beside them are an egg and a cone.

The surrounding lower pool is also paved with Wattscliff sandstone, on the floor of which is a bas-relief of six large salmon. The combination of The River and Youth won a Fountain of the Year award in 1995.

Since being unveiled, further work and renovations have been carried out on the fountain over the years, including the installation of a multi-coloured lighting system.

Repairs have been frequently required, and in autumn 2013 the fountain had to be switched off after a major leak was identified. The fountain later filled with soil and plants in 2015.

On either side of the fountain are two large sculptures collectively known as Guardians. The Sphinx-like sculptures – made from the same Darley Dale stone as the Council House and also by Mistry – are 10 ft high, 8 ft wide and 16 ft long. The sculptures are not identical and take features from a variety of animals.

Two abstract pillars, with lamps, complete Mistry’s design but, according to Birmingham City Council, the artist has declined to comment on their meaning.