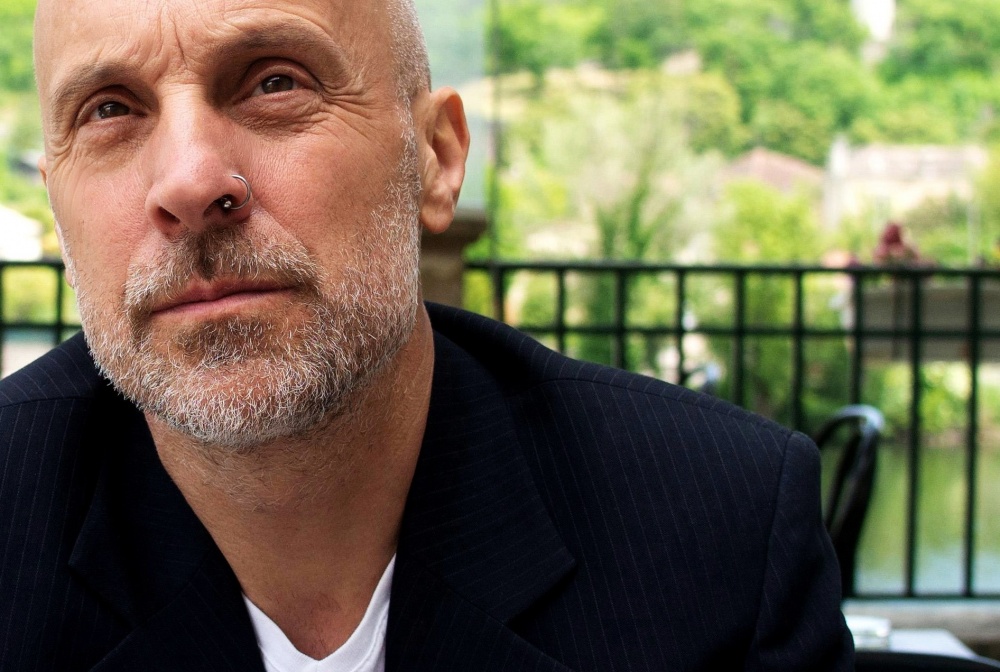 A brave book tells the true story of a love that dared to cross social and sexual boundaries (Photo: Geoff Bunn)

Birmingham born author Geoff Bunn shares his memories of the city and bravely opens his heart about a love that made him see the world in a new light in a daring book called ‘blond(e) BOY, red LIPSTICK’.

The book is the true life account of a moment in the author’s life when he fell in love with a girl who he later discovers is a boy.

Geoff Bunn was born in Birmingham in a poor industrial estate where life was tough, and he left school without any qualifications and ended up working as an apprentice at the Leyland car factory. Despite the setbacks he later went on to craft a career as an artist and author, and now has homes and studios in Ireland, France and Sweden.

Bunn’s autobiographical ‘blond(e) BOY, red LIPSTICK’ is constructed in the form of a novel and it moves at a pace that grips the reader right from the start where the narrator, aged 18 at the time, boards a London-to-Birmingham train when a young girl, with bleach blonde hair and lush red lipstick, suddenly steps into same carriage and decides to sit opposite him despite the entire cabin being empty.

The narrator’s description of the girl siting opposite him is vivid, striking, and haunting, and it lingers in the mind in the same way a picture of Marilyn Monroe remains embedded in the mind. Once seen, never forgotten.

Alley is a passionate girl with a spirit that is open to the patterns, nuances and invisible energy of life around her. She misses nothing and savours every moment of existence, always absorbing and sponging up every essence that comes across her path. Her vivacious energy and witty outlook mesmerises the narrator as they start chatting and sharing thoughts on that fateful encounter in a train in August 1981.

Their ‘chance’ meeting on a train heading towards Birmingham results in Alley and the narrator arranging to meet again, and as the events unfold across the landscapes of Birmingham and London in 1981, two souls become one despite the heterosexual narrator coming to the realisation that the breathtakingly beautiful and shimmering blonde Alley is a boy.

The story delves deep into the mind of the narrator as he grapples with his inner feelings, leanings and inclinations, battling with cultural and social expectations and challenges, and trying to come to terms with the cosmic force that ripples and flows through the very core of his soul.

The character of Alley and the narrator are drawn with such dynamic truth and warmth that the reader can sense the cerebral union shared by the couple. Whatever political or sexual orientation the reader may have will be put aside as the story unfolds. The compassion and humanity in the book speaks to all regardless of any social views or prejudices.

This atmospheric book has the same Northern edge and melancholia which were common ingredients of the legendary BBC ‘Play for Today’ dramas which were transmitted during the 1970’s. Those ‘kitchen sink’ dramas kept a tight focus on working-class stories and held up a mirror to the shifting sexual and political landscape of the times. The book reads and flows like a gritty script for a ‘Play for Today’ directed by Ken Loach. The stark and undiluted memories shared by the narrator of the book reeks of documentary realism. There is no sentimentality, no syrupy or dreamy romance, and the narrator even reveals his own insecurities and anxieties which makes his reminisces come across as unvarnished. The book does not glance back into the author’s past with rose-tinted glasses.

The tale is balanced between two distinct timescales, the present and 1981. The prologue shows the narrator packing his bags at his coastal home in Ireland as he prepares to leave for Birmingham. His daughter encourages him to revisit his old haunts and meet his friends in the hope of easing his mind about the inner pain that haunts him.

The pain felt by the narrator stems from the love that he found all those years ago when he fell in love with the ethereal and passionate Alley. An old picture of the two lovers taken inside a photo-booth triggers off an explosion of emotional memories from a time when life had a texture and hue which seems to be missing in the narrator’s present existence.

The book refuses to rush headlong towards stereotypes, clichés, or political and religious philosophies regarding the ‘morality’ of the situation in which the two lovers find themselves in. There is no pity here. The lovers simply wish to be left alone and enjoy their time together in peace. The world outside, with its ignorance and intolerance, is momentarily kept at bay. The narrator chooses to share his experience in a brutally honest and direct way which makes the story more poignant and pertinent.

The pulpy cover design of the book, and the book title, gives the impression that the reader is in for a salacious and trashy story full of taboo-busting content with lashings of torrid sex thrown into the feverish mix. This remarkable book is far more complex and intelligent than the impression implied by the racy ‘beach book’ type cover. This is not a lightweight book. Cheap thrills and titillation do not form the framework of the narrative. There is honestly and real courage on display in this book. The sensitive experience outlined in the story, including the sensual element, are handled with emotional warmth and honesty.

The narrator looks back over his life with genuine openness and he bravely shares his intimate moments of love with the reader. His experiences are not sanitised or airbrushed. The spiritual and physical connection between the two lovers is written in a manner that conveys the invisible dance that swirls inside their souls.

The prose steers away from colourful pretension or soap opera melodrama. The style of writing is raw, immediate and real, and free from any ‘artistic’ flourishes that might hamper or drown the narrative. The author uses words and phrases that come straight from his heart as he relives his experience from that profoundly moving period in 1981 that left a deep mark upon his heart and mind. The love and sensuality that he shared with Alley took him into regions of the soul where the concept of time and space seemed to melt and lose all scientific meaning.

What marks this book out from others that share similar themes is the way the author refrains from pushing an ‘agenda’ as he shares his memories of a love that is still viewed with suspicion in some sections of society. This true life tale is not some sort of ‘soapbox’ moment for the author to rant and rave or wax lyrical about the pros and cons of human sexual orientation or try to ‘explain’ gender politics. The theme at the forefront of this remarkable book is unadulterated human love.

The author is not driven by transgender politics, sexual orientation rules, or social ethics. The homophobia suffered by the narrator and Alley is not the driving force of the book. Love is always at the forefront in this book, and love is the force that drives and compels the narrator in his decisions after he meets Alley.

The music of David Bowie and Barbara Streisand is referenced in candid sections of the story which adds a delicate soundtrack to the blossoming love between the narrator and Alley. The fashions and styles, including hairstyles and make-up of the late 1970’s and early 80’s are brought alive by the narrator’s period perfect descriptions, and his deep love for Birmingham is apparent in the way he sets out the landscape of the city in the book. The changing landscape of 1981, both physical and cultural, makes a deep impression upon the two lovers.

This book will be of special interest to local history and heritage enthusiasts. The author invests as much passion and attention to detail to the geography and architecture of Birmingham, past and present, as he lavishes upon the description of his beloved Alley. The book transports the reader back in time and the streets of Birmingham’s ever changing city centre are visualised as they were back in 1981 before the developers moved in and tore down buildings that meant so much to the people of Birmingham.

The sights and smells, and colours, of the old Bullring and Rag Market are brought back to life in such a realistic and evocative way that readers will feel they’re walking over the same cobblestones and back streets of the city centre. Old clubs, bars and pubs such as The Hostoria and The Aussie Bar in Hurst Street are brought back to vibrant life. The author’s descriptions conjure up these authentic places which were once a hub of life and sparkling energy. From hotels and coffee houses in the city centre, including street locations such as ‘The Ramp’ in New Street where lovers and friends often arranged to meet before heading off to a nightspot on Fridays, to the large and ornate red brick Victorian houses in Handsworth, the Birmingham of 1981 breathes with vitality in this book.

The narrator contrasts the era and landscape of the time in which he fell in love with his beloved Alley to the cold and lifeless corporate owned theme bars and pubs of the present era which are seen as sterile and anaemic by comparison. The artificiality of the present era offers little in the way of authenticity or human warmth in this searing book.

His memories of spending time in the old Central Library in Chamberlain Square on wet afternoons and then wandering over to the Museum and Art Gallery to have a coffee in the Edwardian Tearooms offers a snapshot of the city before the advent of the vast changes that have, and still continue, to take place around that location.

The carving up and demolition of some quarters of the city has resulted in communities being severed from their roots and cast adrift, and the new buildings which are erected over the sites offer little welcome or comfort to the locals. The changes in the Birmingham landscape come to metaphorically reflect and mirror the changes in the circumstances of the two lovers in the book.

The chance meeting in the London-to-Birmingham train that sets off the events which unfold in the book make a profound statement about the nature of time and circumstance that can change the direction of a human life. These chance or random meetings we sometimes share with our fellow human beings at bus stops, train stations, on couches and aeroplanes, sometimes they lead us towards a path that gives a deeper and more complex definition and understanding of love than that written in poems, composed in songs, or painted in art.

In those rare and special moments when two souls connect during a chance encounter a spark is felt from the very depths of the universe. The choices made during that totally random meeting of minds and souls results in the individuals inhaling the scent of a cosmic love that is beyond the comprehension of those who know them, and it challenges the very fabric of all that they know and understand about existence. They discover a type of love that defies convention and requires no explanation, no definition, and no approval from their peers. This is a love that emanates with a cosmic force that lights up the human heart. That is the beating heart of this delicate, sincere and sensitive book.

‘blond(e) BOY, red LIPSTICK’ by Geoff Bunn is published by Amazon and is available in Kindle and paperback editions here.