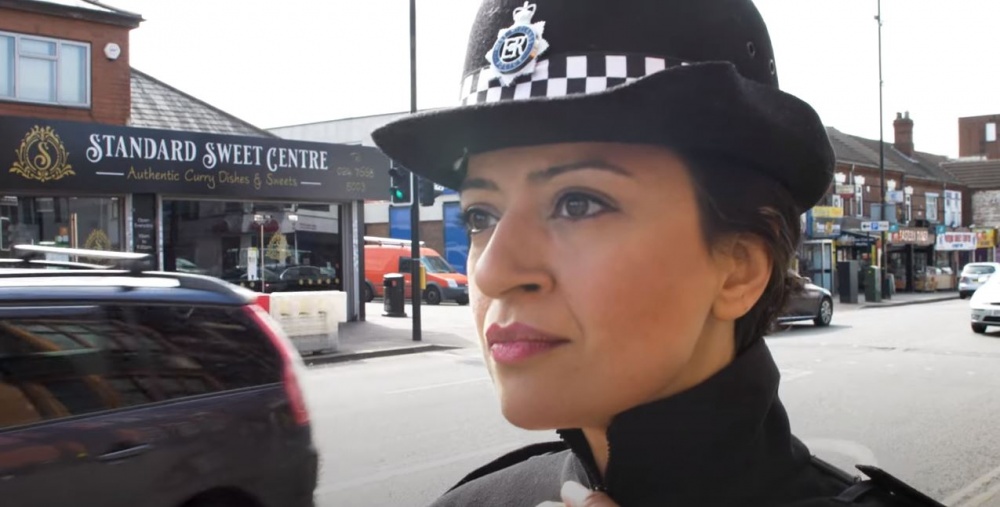 Aged 18, Khizra Dhindsa took the bravest decision of her life and fled Pakistan to come to the UK

With all eyes are on Coventry today (15 May) as it celebrates officially becoming UK City of Culture, a West Midlands Police officer has penned a poetic tribute to the city.

For the next 12 months, Coventry will be host to a variety of arts and cultural activities and exhibitions, aiming to show how diverse and modern the city is.

The West Midlands Police are joining in the celebrations with one of their officers performing a poem titled ‘Send me to Coventry,’ as a tribute to the city which she credits with being the catalyst for positive change in her life.

Through poetry, Chief Inspector Khizra Dhindsa tells how she overcame cultural barriers to become a positive role model in policing. Aged just 18, with only £40 in her pocket, Khizra took the bravest decision of her life and fled an arranged marriage in Pakistan to come to the UK.

She landed in Birmingham and took the first bus out of the city at random. It took her not only to Coventry, but into a new life that eventually led to her becoming a police officer with us.

City of Culture policing lead, Chief Inspector Helen Kirkman said: “Not many people would put the phrases ‘arts and culture’ and ‘policing’ together, but West Midlands Police want to change that.

“We’ve been involved in the plans for the year-long event since the early stages with the City of Culture Trust and partners. While the traditional side of our work is always to make sure all events and activities are safe and secure for everyone attending and visiting Coventry, we’re also determined to uniquely use the year to create a lasting impact and positive legacy.

“Through our own dedicated City of Culture policing team, the title is allowing us to make the most of this unique opportunity by using arts and culture to tackle issues which matter to local people to help prevent crime, build relationships and trust and showcase all the opportunities West Midlands Police have to offer.

“One of our main priorities, which is also shared by the Trust, is around using arts and culture to divert young people from violence and exploitation. As part of this, we’ve signed up our very first Artist in Residence to help us build better relationships with the communities we serve, through art and creativity.”

Part of a new approach to tackling youth violence, called Barriers to Bridges, Kay Rufai is tasked with the challenge of using creativity to build trust between the city’s young people and the police.

According to the force, there are young people in Coventry who are at risk of criminal exploitation and serious youth violence. West Midlands Police believe Rufai can work with them to understand their experiences and help them find a voice.

Rufai will be spending time with WMP doing in house research and shadowing, and then in the community, before presenting his creative piece at the CVX Festival, a three-day arts activism festival in the summer curated by young people.

Her journey took her not only to Coventry, but into a new life that eventually led to her becoming a police officer.

Catherine Stock, the Community and Engagement Lead for City of Culture, said: “This is a key event for us. We are working closely with the producer for the event to ensure artists are advocates and positive role models for the young people of Coventry; using their position of influence to try to bring about change.

“This will be supported by a mentoring programme that we are helping to shape, which will bring together artists who want to make a difference with those young people most at risk of criminal exploitation. This diversion programme will be a legacy project, which we are hoping will continue well beyond the title year.”

One of the West Midlands Police’s Impact Areas, Hillfields is part of the Trust’s first ‘In Paint we Trust’ project and the force’s St Michael’s Neighbourhood Team have collaborated with Coventry City Council by commissioning a community mural to be painted at Hillfields Square.

This piece of street art will be co-designed with local young people who were asked to base their design around issues affecting young people, such as, bullying, internet safety, road safety and knife crime. It is currently being spray-painted by artists.

The West Midlands Police and Crime Commissioner Simon Foster, said: “Coventry City of Culture promises to be a wonderful event that energises the city and inspires a generation.

“I’m pleased to see West Midlands Police are using the opportunity to connect with young people, building bridges and strengthening communities in the process.”

You can find out more about Coventry City of Culture by following @CovPolice2021 on Twitter.