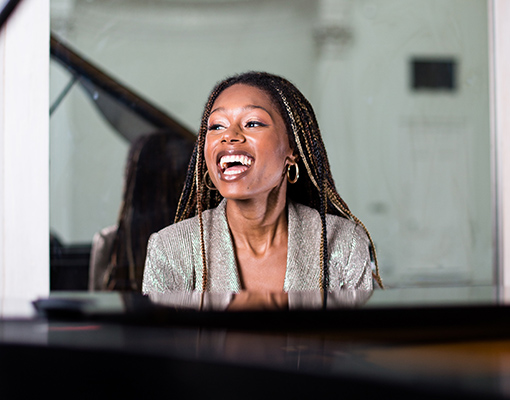 One of the UK’s most exciting young classical musicians will perform at Town Hall, a B:Music venue, for the very first time later this month.

Isata Kanneh-Mason – who is the eldest of the seven musically prodigious Kanneh-Mason siblings – has won a place on ECHO’s Rising Stars touring series for the 2021-22 season, during which she will showcase her talent in Birmingham and a number of other cities across the UK and Europe.

Kanneh-Mason’s personally curated concert programme will include a brand-new piece of music which has been specially commissioned for the tour.

Ahead of her Town Hall performance Kanneh-Mason spoke to us about the honour of being included on the 2021 ECHO programme, performing with her family and the importance of supporting and developing classical music talent following the pandemic-enforced shutdown of live music.

Congratulations on being successfully nominated by B:Music for the ECHO Rising Stars programme! How exciting is it to be taking part in this concert series?

I’m really looking forward to playing in Birmingham and cities across Europe. I’m really excited about the programme as well because it has lots of Rachmaninoff on there – including his preludes and tableaux etudes, which I love – and I haven’t really played solo Rachmaninoff before, so that will be exciting.

I’ll also be playing two classical sonatas which I love, a Mozart and a Beethoven. There’s also a new commission being written for the programme which I’m really excited about, because it’s always wonderful playing new music. I’m really looking forward to live concerts and a tour.

What do you hope to gain from the experience?

You’ll play a solo concert at Town Hall for the first time as part of the programme having previously performed at the B:Music venue, with your brother Sheku Kanneh-Mason…

Birmingham is a city that I have a fondness for because I have family there who I’ve been to visit a few times, so I always associate the city with family. It’s a lovely city and I always love going there: Town Hall and Symphony Hall are both such beautiful spaces.

During lockdown you started giving performances online, including a piano recital from your home for B:Music. How welcome has it been to keep performing, albeit digitally, during the pandemic?

It’s great that we’ve been able to do this, because you can reach out to people from all over the world and potentially more people than you could in a concert hall. But obviously I miss in-person live performance, and it’s not the same as a musician to be playing and not have the people there because we really feed off the energy of the audience. It’s definitely difficult to not have that.

How important is it to keep supporting other young and developing musicians, whose progress or access to music may have been stunted by the pandemic, through their burgeoning careers?

It’s definitely important. It’s been a difficult time for young musicians because so many concerts have been cancelled or rescheduled, and it can feel like there’s less space for young musicians. It’s therefore even more important to give them a voice and a space to play.

Julian Lloyd Webber recently hosted a radio series showcasing and talking to young musicians, because he has the same concerns.

Do you have any advice for young musicians whose passion for music may have actually been sparked during lockdown?

I’d say that’s wonderful! It’s important to find a person in the industry who you really resonate with: when you see that someone doing something, it then in turn helps you to see yourself doing it and gives you inspiration. Find someone who inspires you and listen to as much music as you can, see them live when that’s possible and then just practice and enjoy it.

How much are you looking forward to the safe return of live audiences at your concerts?

I think it will be such an emotional moment! Over the past year there were a couple of times when restrictions eased and we were able to have concerts, albeit with a third of the audience there. Each time I felt such an energy from the audience: everyone is just so excited to have live music back. When it comes back again in full it will be really, really special.

Isata Kanneh-Mason will perform at Town Hall on Thursday 25 November 2021 at 7:30PM. Tickets available at bmusic.co.uk.