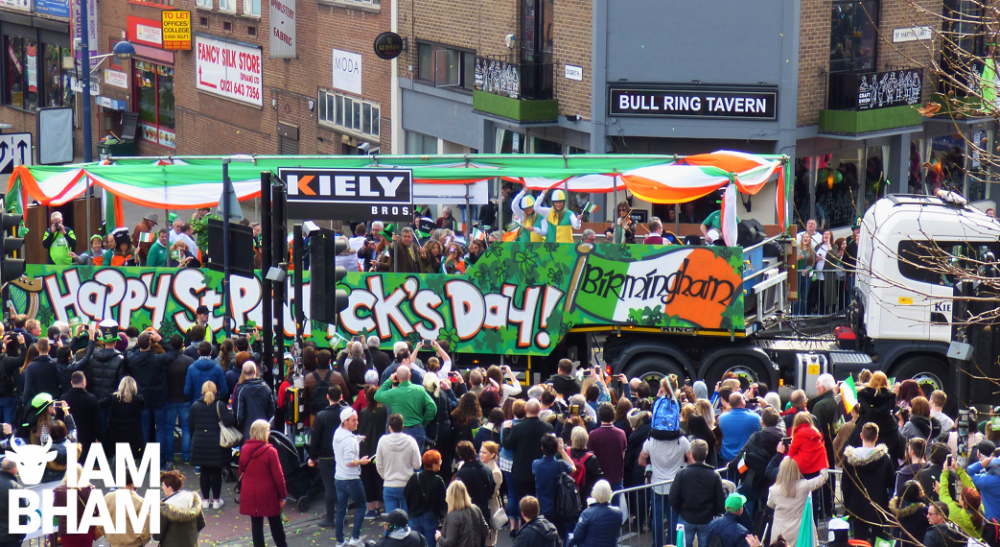 St. Patrick's Day parade in Birmingham has been cancelled due to roadworks in Digbeth (Photo: Rangzeb Hussain)

This year’s St Patrick’s Day parade in Birmingham has been cancelled for the third year in a row but festival organisers say a series of events will take place to celebrate the spirit of the popular annual ceremony.

The cancellation of the parade is due to the extensive roadworks currently taking place in Digbeth which is part of the traditional route of the St Patrick’s Day floats and marches.

The much-loved public event – which attracts around 100,000 people and is thought to be the third largest St Patrick’s Day parade in the world – was cancelled in 2020 and 2021 due to COVID-19 restrictions.

However, this year’s parade has been terminated due to the ongoing Midland Metro construction work to lay tramlines along the traditional route of the marching bands, dancers, community groups, floats and Birmingham dignitaries who take part in the parade.

The route takes in the Bullring outdoor markets, the Custard Factory and weaves through Birmingham’s Irish Quarter.

There is absolutely no chance of the iconic and hugely popular annual parade taking place on Sunday 13th March through its regular route this year.

The roadworks in Digbeth High Street have led to long term disruption both to motorists and to local businesses in the area.

Event organisers in the area have been left frustrated by the long term street works.

Community events and exhibitions and have been affected by the construction with people finding it difficult to access the various live music venues and art studios.

Despite the loss of the parade this year the St Patrick’s Day celebrations will continue.

The St Patrick’s Festival Birmingham committee issued a statement saying: “Due to works along the usual parade route, this year’s St Patricks Festival is not going ahead as previous years and instead there will be a calendar of exciting events spotlighting Birmingham’s Irish community across Digbeth.

“The focal point of this year’s festival on Sunday 13 March will be the annual St Pat Rock’s stage in the heart of Digbeth at the Zellig and the Custard Factory.

“Foodies will also be catered for, with a host of the best of Birmingham street food.”

The St Patrick’s Day Birmingham committee vowed to continue the spirit of the annual event despite the parade being cancelled.

The committee is looking forward to hosting a “well-deserved celebration of what it means to be Brummie, and how it feels to be Irish”  and welcoming people from across the diverse communities of Birmingham.

The parade attracts people from every community in Birmingham and people mingle and enjoy a day of unity, love and friendship as they dance and drink together during the festival.

Punjabi bhangra dancers mingle with Caribbean calypso troupes, and Chinese dragons and lions float and jump as traditional Irish dancers, which includes children, all frolic and dance along the High Street in Digbeth.

People arrive dressed in the Irish colours of the festival, and some will add their own unique styles into the mix, while those attending in floats and trucks come in vehicles decorated with things that are close to their hearts. The festival is used by some attendees to raise money for various charities.

Anger and frustration has been expressed on social media from Birmingham residents who feel that the St Patrick’s Day parade – which is a fun family day outing for many Brummies – could have been rerouted or held at a different location.

This year, despite the cancellation of the parade, people are being offered the chance to attend a range of events to celebrate St Patrick’s Day.

A week of events will commence following Sunday’s festivities in Digbeth which will include live music gigs and concerts, beer and whiskey tasting sessions, history talks, storytelling and performances from spoken word artists.

The Old Crown public house will also host some of the live events despite the horrendous street works which have impacted access to local streets in the area which would have been traditionally packed with revelers enjoying St Patrick’s Day parade.

There has also been much sadness expressed by Birmingham’s Irish community as plans move ahead to demolish The Irish Centre in Digbeth as developers move into the area with proposals for apartments and studios.

St Patrick’s Day festival organisers also said that this year will see a return of the Festival’s In Memoriam Project which will pay tribute to members of the Irish community who sadly passed away last year.