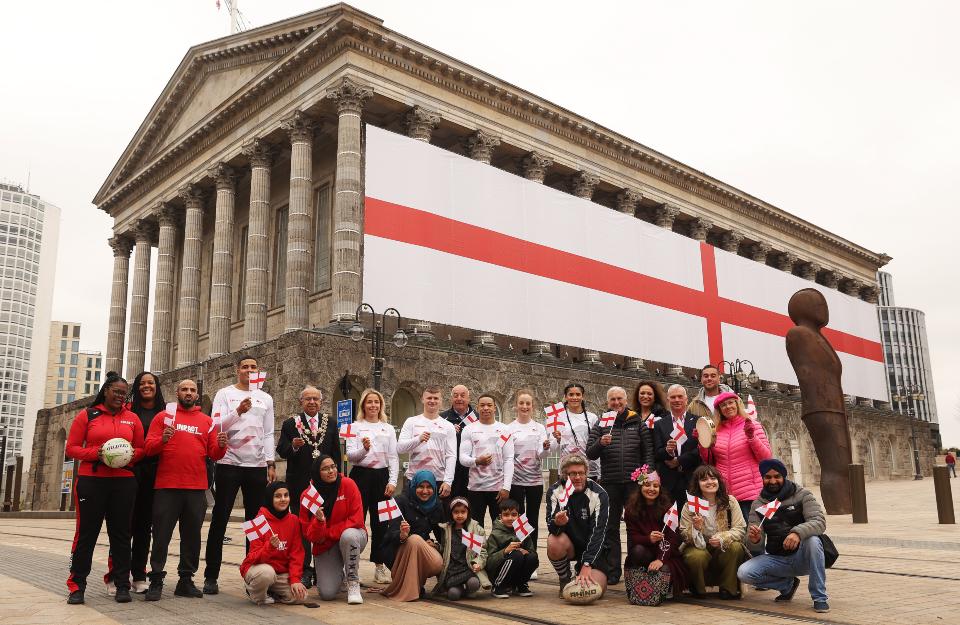 A giant St George flag has been hoisted onto the side of Birmingham’s Town Hall building to mark the national holiday and welcome Team England athletes ahead of the Commonwealth Games in the city.

Organised by the city council in recognition of England’s national day, the publicity stunt was staged to coincide with preparations underway for the Birmingham 2022 international sporting tournament, which begins in less than 100 days.

In attendance for the flag unveiling were groups that have received funding from the council’s Celebrating Communities scheme – a £2million project which is supporting organisations in all 69 of the city’s wards to help people embrace the Games and Birmingham’s role as “Proud Host City”.

Along with passing members of the public, the participants had an opportunity to chat about the growing excitement for the Games with Team England athletes including world champion gymnast Joe Fraser, high jumper Laura Zialor, judokas Kelly Petersen-Pollard and Dan Powell, boxer Delicious Orie and wheelchair basketball player Siobhan Fitzpatrick.

Also on hand were elected members representing all three of the party groups on the city council, officers helping deliver the Games and Lord Mayor of Birmingham, Cllr Muhammad Afzal.

“The West Midlands has been my home since I was a young child, so I was incredibly proud to become a British citizen last year. The thought of not being eligible this year to represent my country in competition, especially with Birmingham 2022 on the competition calendar, was heart-breaking.

“My goal is to be a part of big sporting events in Birmingham over the next decade, so to get the opportunity at this stage of my career to fight in front of a home crowd in the Commonwealth Games is a dream come true. I promise the NEC will be rocking from the moment that first bell rings!”

Judoka Kelly Petersen-Pollard added: “It is amazing to be here with Team England celebrating St George’s Day in my hometown. It’s been a dream for so many years, so to be apart of the celebrations and to be here today makes me incredibly proud to be English and to get this far.

“I cannot wait to hopefully represent my country in front of my family, my boyfriend and my friends at home at the Birmingham 2022 Commonwealth Games.”

Ashanti Netball, based in the North Edgbaston ward, is one of the Celebrating Communities groups which attended the event. The group is using council funding to deliver a series of netball sessions for the community.

Sharlene King, who manages the netball club, said: “There is a lot of excitement in Birmingham with the Commonwealth Games coming. We are so excited about being involved in these types of events that are leading up to the Games. We want to represent our city through the sport that we love and encourage more people to be involved as netball continues to rise.”

Satpal Singh, Manager of Sikh Nari Manch UK based in Stockland Green, said: “We are very humble and thankful that we have been successful in getting some funding to put on a project to celebrate the Commonwealth. We will have an opportunity to educate and celebrate the rich history of the Commonwealth with the local community and we are so looking forward to it.”

Deborah Cadman, Chief Executive of Birmingham City Council, said: “Given we are the Proud Host City for the Birmingham 2022 Commonwealth Games, this is a special St George’s Day – so we wanted to do something to show our support for the athletes that hope to be competing for the Proud Host Nation of England.

“I am delighted we were able to welcome community groups from across the city to the event. These Games are all about bringing people together and they are about people each and every neighbourhood and street of Birmingham.

“Whether you live or work near one of the competition venues or not, these Games are for us all and as we get ever closer to the biggest event in our city’s history, you can sense the interest and enthusiasm is increasing on a daily basis.”