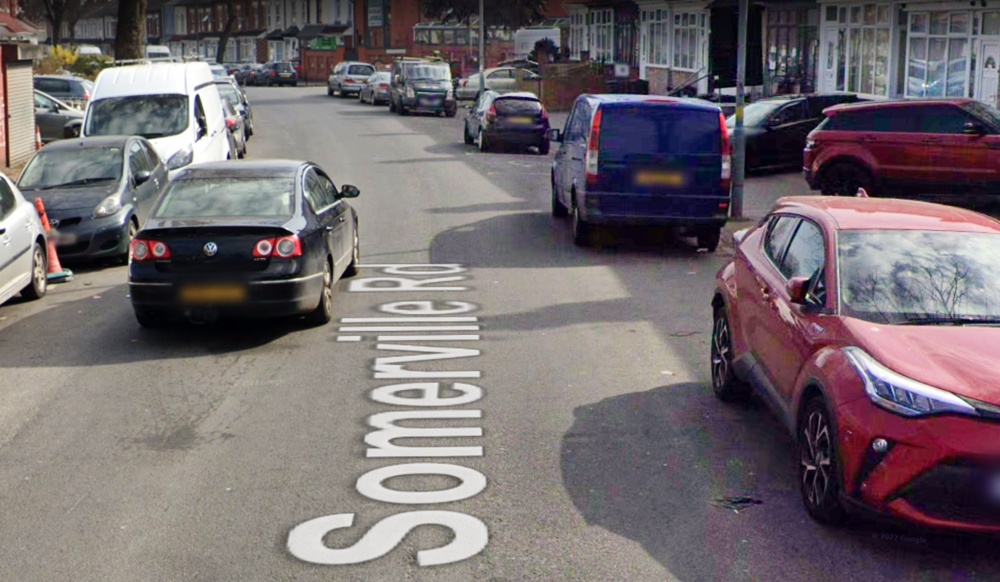 The shocking incident took place just after midnight on Sunday (July 3) and comes after a spate of shootings in Small Heath.

West Midlands Police have launched a hunt for the gunman who fired two shots and then fled the scene of the crime last night.

An armed response unit arrived at the scene, including a team of paramedics, and the two shooting victims were taken to hospital as officers launched an investigation.

Police officers searched the area for forensic evidence, and local residents were were asked to supply CCTV footage to help with the investigation to trace the perpetrator.

CCTV footage has already been leaked onto social media by locals which reportedly shows a car driving slowly along what appears to be Somerville Road. The car suddenly stops in the middle of the road and a gunman comes out of the vehicle and points a weapon at a male who is standing outside a property in Somerville Road.

A police spokesperson, said: “Two people were injured after shots were fired outside a house on Somerville Road, this morning. It’s believed a weapon was fired by a gunman who then fled the scene, just after midnight.

“CCTV has been recovered and enquiries are continuing.

“No one has been arrested at this stage.”

A Somerville Road resident, who wishes to remain anonymous, spoke to I Am Birmingham about the fear and concerns in the area following a number of shootings in the area.

The 60-year-old man, who has lived in Small Heath since 1983, said: “We need more police patrols around here. These shootings are becoming a regular thing now. We need a quick response from the new councillors, and we demand more police officers in the area to tackle the rise in antisocial activity.

“I hope this latest shooting finally gets the authorities to take action.

“It’s mostly youngsters in cars, and if it’s not a shooting it’s speeding along local streets after 10pm.

“Every night we has cars speeding up and down. There’s been accidents too, even fatalities.

“And it’s not just guns. There’s been knife attacks in the area, and people have been killed.

“People are too scared to speak out. The criminals are usually armed with guns, baseball bats or machetes, and they usually attack as a mob. These savage attacks are becoming more common.

“Just last week there was vicious attack on a father, who was returning home with his two little daughters from the mosque, when their car was attacked by an armed gang of youths. It was just up the road from here by the Blues ground.

(Visited 1,997 times, 2 visits today)
https://www.iambirmingham.co.uk/2022/07/04/residents-demand-action-midnight-shooting-small-heath-birmingham/https://www.iambirmingham.co.uk/wp-content/uploads/2022/07/Somerville-Road_pe1-800x466.jpghttps://www.iambirmingham.co.uk/wp-content/uploads/2022/07/Somerville-Road_pe1-300x175.jpg2022-07-06T13:40:42+00:00Abdul KareemCrimeNewsappeal,B'ham,Birmingham,blades,Blues,Bordesley Green,Brum,Crime,firearms,gun crime,I Am Bham,I Am Birmingham,injury,Investigation,knife crime,machetes,Midlands,shooting,Small Heath,Somerville Road,teenagers,UK,West Midlands,West Midlands Police,WMPTerrified residents in Small Heath are demanding police action after two men were shot in Somerville Road last night. The shocking incident took place just after midnight on Sunday (July 3) and comes after a spate of shootings in Small Heath. West Midlands Police have launched a hunt for the gunman...Abdul KareemAbdul Kareem[email protected]AuthorI Am Birmingham
« Fears grow for Humza Khan from Birmingham who vanished in the Highlands
REVIEW: We Will Rock You – a truly magical kind of show »