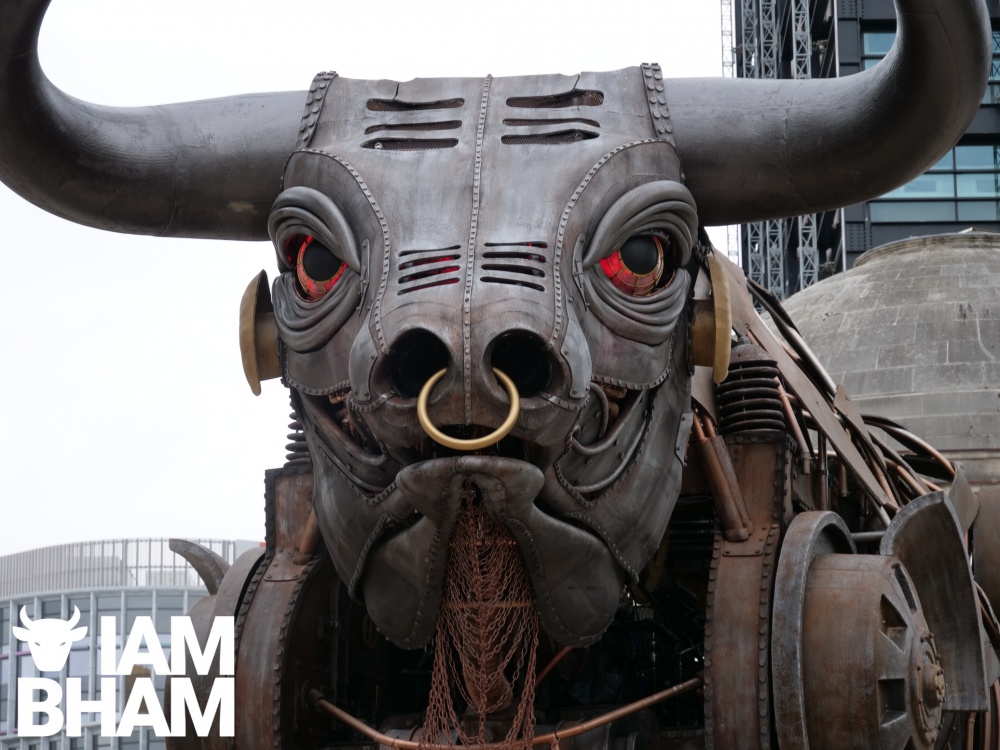 The 'Raging Bull' will remain on display until the end of September at least, officials have announced (Photo: Adam Yosef)

A 10-metre high fiery bull – the sensational star of the Birmingham 2022 opening ceremony – will remain on display after the Commonwealth Games, as the search to find it a permanent home begins.

Birmingham City Council announced that Games partners have agreed to allow the iconic sculpture to remain in Centenary Square, where it is currently on display, until the end of September while discussions are held to find a long term solution.

The breathtaking bull, unofficially dubbed ‘Raging Bull’ for its bright red eyes and ability to breathe smoke, has garnered attention from fans across the world but was initially heading for the proverbial slaughterhouse on 9 August, after the closing ceremony of the Commonwealth Games 2022.

Showcased at the city’s Commonwealth Games opening ceremony, the bull represents a message of female emancipation, the contribution of immigrant and working-class workers who worked in the fiery mills and factories of the Black Country, and Birmingham’s little known connection to the Slave Trade.

News that the much-loved bull would be dismantled, and probably end up as landfill or scrap metal, caused outrage and disbelief from Brummies, who launched a campaign to reverse the decision.

The public backlash forced Cllr Ian Ward, leader of Birmingham City Council, to come out and placate fans last Sunday with news that the council was in talks with partners to find a way of saving the bull.

Fans of the bull, which is attracting thousands of visitors to Centenary Square daily since going on public display, expressed their anger on social media and called for the bull to be placed on permanent show; with suggestions that the animatronic sculpture – made from material that cannot withstand long term exposure to weather elements – could be housed under the canopy structure of Curzon Street Station once the HS2 project has been completed.

Admirers of the bull heaved a sigh of relief today as news filtered through that the bull has been granted ‘a stay of execution’ and will continue to remain on public display until the end of September, which will allow more residents and visitors to enjoy the amazing artwork as celebrations continue in line with the Birmingham 2022 Festival drawing to a close.

Announcing the news, council leader Ward said: “We are delighted with the response the bull has had from the opening ceremony which reflects our history.

“The diverse history of Birmingham is one of the reasons we were successful in our bid for the 2022 Commonwealth Games and the way residents and visitors have embraced the bull shows how important this is.

“The opening ceremony’s narrative illustrated how, by working together and understanding each other, we can overcome barriers and continue having challenging conversations looking forward to creating a bolder and more inclusive Birmingham.

“We consider this one of the top attractions in the city and seeing residents and visitors enjoying the bull being in the city this week, has been brilliant and enhances the need to keep the Bull in the city for longer.”

Andy Street, West Midlands mayor, also confirmed the news about the bull being saved and said: “The opening ceremony’s towering animatronic bull, which has captured all of our imaginations, is sticking around for a little while longer yet.

“The bull will stay in Centenary Square until at least the end of September.”

Nigel Huddleston, Commonwealth Games Minister, said: “The bull had an important story to tell on women’s rights and the city’s industrial heritage during the opening ceremony. It has captured the public’s imagination, brought culture to a mass audience and shown that Birmingham 2022 is about more than the world-class sport on show.

“I hope the bull, the Commonwealth Games and its cultural programme leave lasting memories for those who have experienced it, and that they encourage more people to get involved in the West Midlands’ rich artistic and cultural offering.”