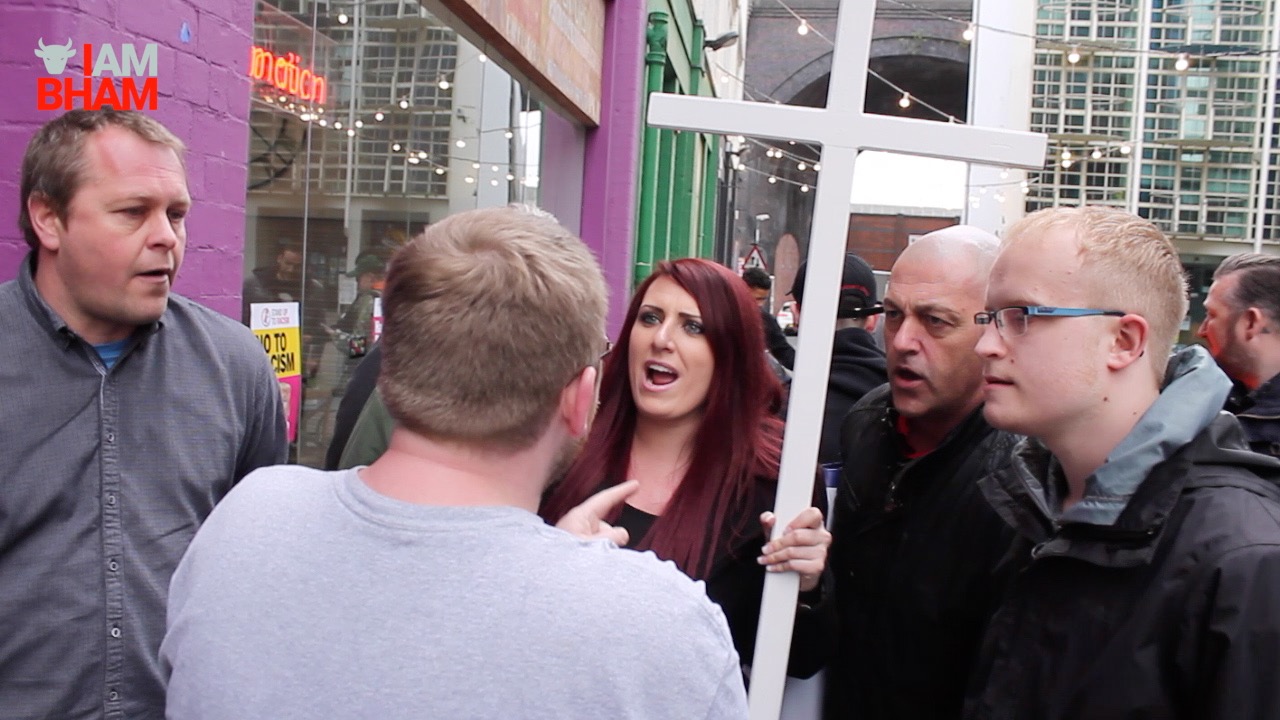 Britain First Deputy Leader Jayda Fransen is confonted by anti-racism activist Doug Morgan as she attempts to disrupt a Stand Up To Racism workshop. Image: Harvey McDonald/I Am Birmingham

Jayda Fransen, the controversial leader of far-right group Britain First, attempted to “invade” and gatecrash an anti-racism event in Birmingham today, but failed in her bid after being confronted by Stand Up To Racism activists.

Claiming “We have every right to be here!” Fransen was seen marching into The Custard Factory in Digbeth this afternoon, where a Stand Up To Racism and Trades Union Council event was being held.

However, after the organisers of the event made a last-minute venue change – from The Old Library in the Custard Factory complex to a neighbouring hall – Fransen and her militant entourage were unable to storm the event, but were instead interrupted and challenged by anti-racism activists outside the building’s reception area.

Despite being confronted by campaigners, Jayda insisted on disrupting the event, which was attended by Talha Ahmad of the Muslim Council of Britain; and Azad Ali from the Muslim Engagement and Development organisation (MEND).

Also speaking at the ‘Confronting the Rise of Racism’ summit, which consisted of speeches, workshops and discussions about tackling racism, anti-Semitism, homophobia and Islamophobia, were Saffiyah Khan and Saira Zafar, the two young women who confronted the EDL in Birmingham city centre last month.

Shouting down accusations of racism outside the anti-hate event, Jayda was captured on film demanding “What race is Islam?”

“If you don’t oppose this ideology, you must be in support of grooming gangs, and beheadings, because it’s all in the Qur’an. You can call me racist all you like, but I know the truth. Islam is not a race, it is is barbaric ideology and has no place in the west!”

In the footage captured earlier today, event attendee Doug Morgan is filmed confronting Jayda Fransen as she tries to enter the building with a group of men, who were mostly dressed in black.

“You are a racist group, dividing communities, picking on Muslims, you are fascist scum!”

Shown being told they are on “private property”, it is believed the Britain First gang were later escorted off the premises by Custard Factory security staff .

Speaking to I Am Birmingham, Doug Morgan said:

“I think it is important that people of all races, religions and none refuse to let Britain First get away with their Pound Shop version of the KKK, roaming the streets with their cross and their hate.

“This group of haters do not represent Christians, white people or a ‘silent majority’. Britain First is a rump fascist group attempting to pull a disparate bunch of fascists and racists around an Islamophobic agenda.

“As a white, working class person of no religion I’m pleased to have told them to take their hate and division out of Birmingham and think that Birmingham should unite to show them that our city will not tolerate fascists when they say they are going to return to Birmingham on 3rd June.”

Harvey McDonald, who filmed the incident, has told of how he was caught off-guard as he was attending to document the Stand Up To Racism rally.

The 23-year-old actor and filmmaker from Stourbridge, said:

“I was filming the Stand Up To Racism event and as I passed the windows of the reception of the Custard Factory, I noticed this mop of burgundy hair and instantly realised it was that hateful racist cow from Britain First.

“She was spouting racist profanities and wielding a giant white cross. It’s a shame she wasn’t fucking nailed to it!

“The vile and abhorrent message she was preaching entirely contrasts the message of hope, unity and strength that the Stand Up To Racism event and speakers were promoting.”

Here's my little crow's nest filming set up for the day. I've also accidentally dressed as a member of the Night's Watch… suppose the crow metaphor is fitting.

“Stand Up To Racism attendees filled up three rooms inside the venue, civilly and passionately discussing how to make the world a better place, how to stand up to bigotry and ensure a better future for the community.

“But the loathsome lot of Britain First goons that joined Jayda outside in her din of bigotry, vilifying an entire religion and anyone who didn’t oppose it, weren’t entirely numerous. I’m sure all five of them had GSCE’s they had to be revising for.”

Upon learning of the incident, the Digbeth Residents Association responded by stating, “Digbeth does not tolerate intolerance of any kind – everyone is welcome here, except those wanting to spread messages of hate”, accompanied with the hashtag #brumisopen.

The attempted disturbance follows a similar stunt pulled by the right-wing rabble-rousers a fortnight ago, when Jayda and her Britain First crew “invaded” an Islamic bookshop in the Alum Rock area of Birmingham, prompting a wave of support for the store, in response from the local community.

Britain First have also been banned from entering mosques in England and Wales and parts of Luton for three years, after repeatedly entering mosques across the country and harassing random worshippers.

This included unfurling a banner outside Birmingham Central Mosque in August 2014. The mosque last month held a community tea party to oppose the divisiveness of the English Defence League (EDL).

Commentators speculate the ban has led the group to find alternative ‘targets’ for their hate campaign.

(Visited 15,270 times, 1 visits today)
https://www.iambirmingham.co.uk/2017/05/06/britain-first-failed-attempt-gatecrash-birmingham-anti-racism-workshop/https://www.iambirmingham.co.uk/wp-content/uploads/2017/05/Jaydan-Fransen-Birmingham-07-1024x576.jpghttps://www.iambirmingham.co.uk/wp-content/uploads/2017/05/Jaydan-Fransen-Birmingham-07-220x140.jpg2017-05-06T19:56:55+00:00Staff ReporterNewsPoliticsRacismVideosanti-hate,Anti-Racism,Birmingham,Confronting Racism,Custard Factory,Doug Morgan,Hate,Jayda Fransen,Racism,Saffiyah Khan,Saira Zaffar,Stand Up To Racism,SUTR,Trades Union Council,TUC,West MidlandsJayda Fransen, the controversial leader of far-right group Britain First, attempted to 'invade' and gatecrash an anti-racism event in Birmingham today, but failed in her bid after being confronted by Stand Up To Racism activists. Claiming 'We have every right to be here!' Fransen was seen marching into The Custard Factory...Staff ReporterStaff Reporter[email protected]AdministratorI Am Birmingham
« West Midlands Metro Mayor Election: Live Vote Count Updates
OPINION | Birmingham street art with a human message »