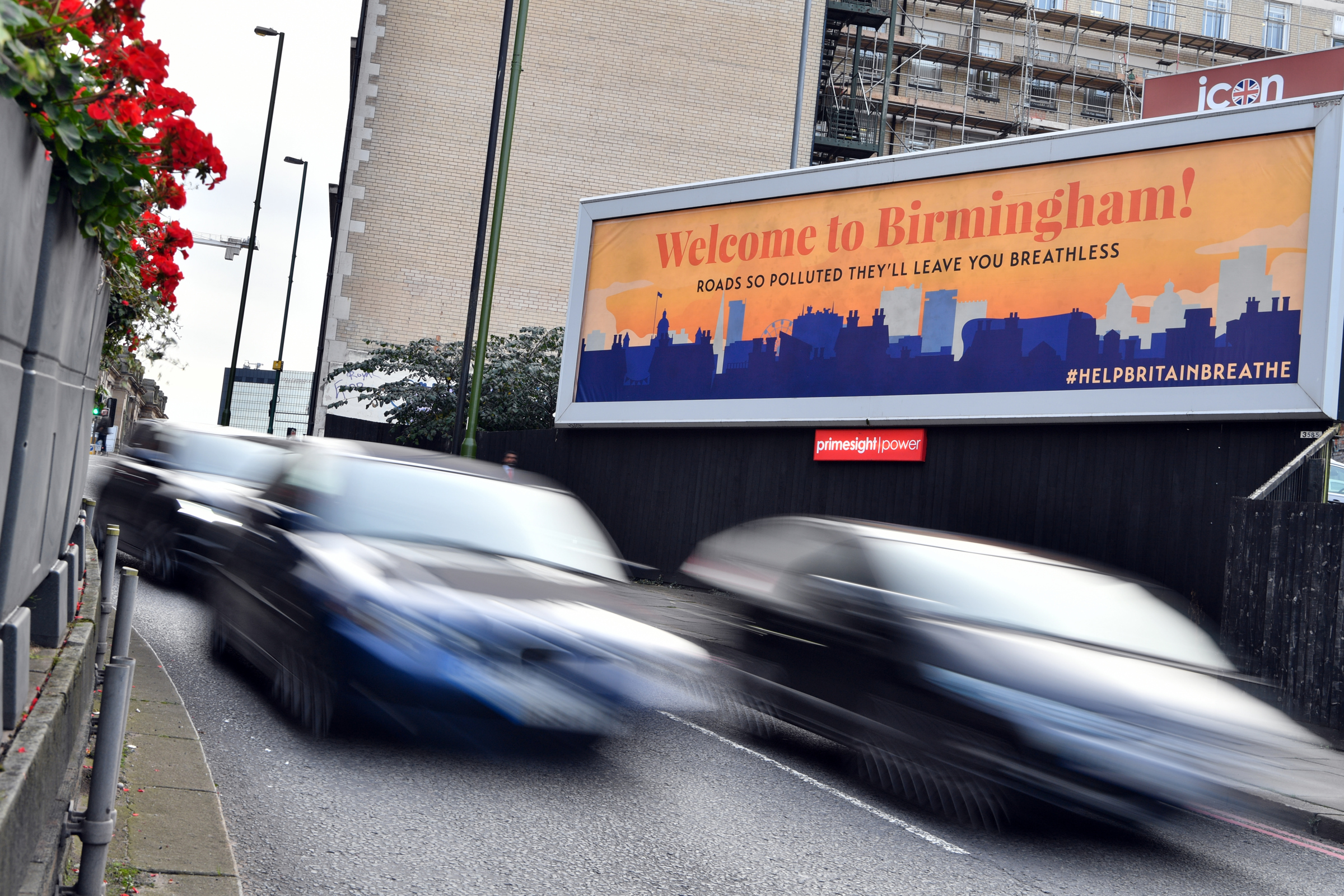 A hard-hitting billboard has gone up on Great Charles St in Birmingham to make drivers aware of the dirty air around them and the health risk this poses.

Drivers on one of Birmingham’s busiest roads may be breathing a little more heavily after spotting a hard-hitting billboard designed to warn how the air around them is among the most polluted in the UK.

Campaigners hope the initiative, which begins with warning to drivers travelling on Great Charles Street Ringway, will boost the public’s interest in the threat posed by air pollution, giving those stuck in rush hour jams a chance to consider its impact on their own health and on those living nearby the congestion.

Andrea Lee, Healthy Air campaigner, said: “It’s worrying how many people living in cities and towns like Birmingham are unaware of how they and their families are affected by the dirty air they breathe every day.”

How bad is traffic pollution in Birmingham?

Previous research from the British Lung Foundation’s Battle for Breath report has shown that in the Birmingham area people are nearly twice as likely to be admitted to hospital with asthma and 57% more likely to be admitted with COPD when compared to the average for most of England, Scotland and Wales.

The BLF says that while breathing in air pollution is not the sole cause, it can be a contributory factor on days when pollution levels are high. In the West Midlands, around 268,400 people have asthma and around 79,000 people are living with chronic obstructive pulmonary disease (COPD).

According to monitoring by the local authority, parts of the Birmingham city centre are more than 1.5 times/50% over the legal limit of nitrogen dioxide air pollution.

Similar 12m x 3m billboards have gone up or will be going up this week on heavily polluted routes in Leeds, Liverpool, Manchester and Southampton, designed to remind people that the filthy fallout from air pollution is not just confined to London.

Air pollution causes the equivalent of 40,000 early/premature deaths each year and costs the UK more than £20bn each year – equivalent to 16% of the annual NHS budget.

Andrea Lee added: “Air pollution is not just a London problem. Illegal and harmful levels of toxic air are found across the country. These billboards are highlighting the risk of dangerous air pollution to drivers sitting in traffic but this is just the start of our campaign to raise awareness of this invisible public health crisis. Politicians at all levels must do more to protect our health from illegal and harmful levels of air pollution.”

A ‘Poisoned Playgrounds’ study released earlier this month by campaign partner ClientEarth also revealed how 33 schools in Birmingham are next to, or near to roads, with harmful levels of illegal air pollution. This is defined as an annual average of NO2 above 40µg/m3.

Dr Penny Woods, Chief Executive of the British Lung Foundation, said: “This campaign is vital in making drivers aware of the devastating impact air pollution has on everyone’s lungs, in Birmingham and across the UK. Research has shown that many drivers are exposed to higher levels of pollution than cyclists when on the same road.

The #HelpBritainBreathe initiative is backed by health and environmental campaigners incuding the British Lung Foundation, environmental law charity ClientEarth, as well as the Campaign for Better Transport, the London Cycling Campaign, Doctors Against Diesel, Friends of the Earth, Transform Scotland, The Chartered Institute of Environmental Health, Sustrans and Cycling UK.

The campaign is urging the public to visit the Help Britain Breathe campaign website at helpbritainbreathe.org.uk, where they can learn more about the issues and be connected to local groups tackling air pollution in Birmingham.

(Visited 1,409 times, 1 visits today)
https://www.iambirmingham.co.uk/2017/10/01/hard-hitting-cleaner-air-billboard-campaign-launches-polluted-birmingham-road/https://www.iambirmingham.co.uk/wp-content/uploads/2017/10/Birmingham-anti-traffic-pollution-billboard-campaign-2017-1024x683.jpghttps://www.iambirmingham.co.uk/wp-content/uploads/2017/10/Birmingham-anti-traffic-pollution-billboard-campaign-2017-220x140.jpg2017-10-01T17:00:42+00:00Staff ReporterActionEnvironmentNewsStreet LifeTransportTravelair,air pollution,B'ham,Billboard Campaign,Birmingham,breathing,Brum,Cars,clean air,cleaner air,exhausts,gas,Great Charles RIngway,Healthy Air Campaign,Help Britain Breathe,HelpBritainBreathe,marketing,motorways,oil,petrol,Queensway,roads,trafficDrivers on one of Birmingham’s busiest roads may be breathing a little more heavily after spotting a hard-hitting billboard designed to warn how the air around them is among the most polluted in the UK. The huge roadside sign has appeared on Great Charles Street Ringway to launch public health...Staff ReporterStaff Reporter[email protected]AdministratorI Am Birmingham
« Birmingham ONLY city to submit 2022 Commonwealth Games bid
Man charged with attempted murder following Small Heath stabbing of teenager »