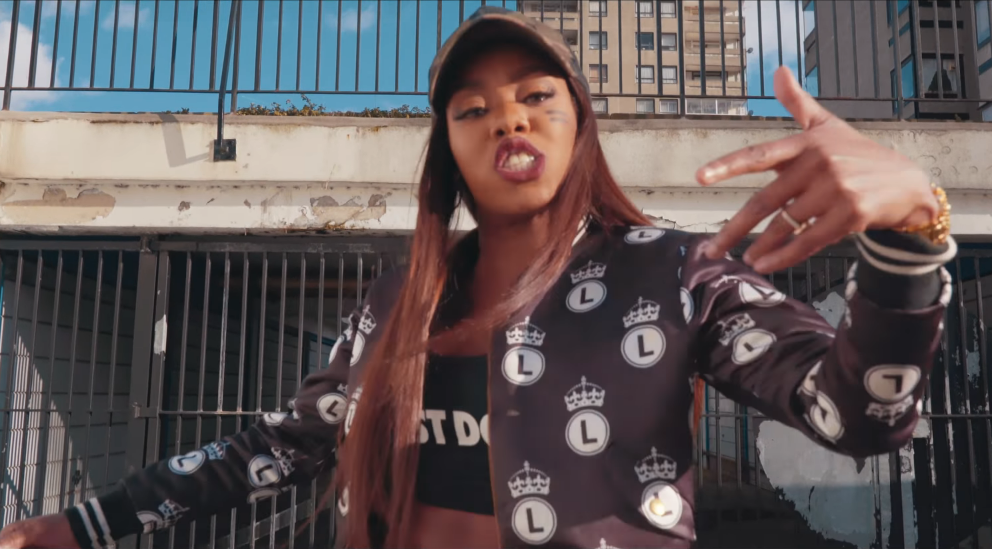 Birmingham rapper Lady Leshurr is back with a new music video, all recorded, shot, edited and released within 24 hours.

Directed and edited by King Wowa, ‘R.I.P’ is the artist’s first freestyle of 2018, and has racked up over 9,000 views in its first 30 minutes of going live on YouTube a little earlier today.

Real name Melesha Ogarro, the 28-year-old Solihull native is best known for her Queen’s Speech series of rap freestyles, the fourth of which went viral in 2016. Her subsequent follow-up, Queen’s Speech 5, was declared “brilliant” and “2015’s crowning freestyle” by Spin, while her Where Are You Now? track featuring Wiley has racked up over 6,000,000 views on her Vevo channel.

All these porkie pies
Why am I not surprised?
Who got their V broken on Valentines?
Look me in the eyes
And tell me that is lies
But you won’t cus you already know that you’re a joke
And you’re broke you ain’t got enough doe to be involved
Shut your trap trap trap trap mute it
Heads like a football boot it
I dunno why you really wanna do this
But RIP to your music
Way 2 up no peace no Deuces
You’re a likkle beg
Beggars can’t be choosers
Hit em with the new ting
Call it exclusive
Don’t need backing I can do it in acoustic Raggo!
I’ll Billie Jean that gyal moonwalk on her she will get bad up
Gyal a get a slap Pon da headback knock knock neck back get tan up
You’re a big girl now standup
Don’t call for me get rang up
How do you mean that ain’t all fibs?
Swear on your life now hand up
Tell the truth beg you stop yapping away
Lie so much should give your mattress away
You can feel me like the clap and the bass
Bars hurt like a slap in the face
What! I’m a do some damage today
Shopping bags I got 10 bags in the safe
You need Jesus baby you need rebuking
Oh Lord get to grabbing the faith
Like Jesus please forgive me for the sinning
My Jesus piece don’t mean that I believe him
It’s creeping up and karma has been given
I leave em shaking like they’re Lil kimming
Do this for my sisters all my women
It could be genetics or the denim
I’m a keep on shining keep on winnin
So move from me with ya Insidious spirit
Idiot
Gyal are running they’re lips together you ain’t a has been -___-
I was never in2 you but I made u benover like WSTN
But you’re a virgin
So don’t try act like your perfect
Get a 9-5 it’s not working
Big mouth must’ve went to see a surgeon
I’ve been on the road they’re still learning
Fake news remix the old version
These bars here have got dem all nervous
Spin a gyal lopsided topsy turvy
Disrespect da Queen will get the murkage
You can’t even afford to get a mortgage
Too hot really I’m scorching I’m a torch em
You are dead as a corpse you’re where the morgue is
U large nah you’re smaller than a dwarf is
Louboutins you sure you can afford it?
They didn’t send you that u went out and bought it
I heard your new tune I just paused it
Eject it & fling it weh!
All of them want my signature
Look money up front just Bring it deh!
No gyal can sit in this chair
Don’t speak up da lingo literature
No beef got no steak (stake) in the house
I do it big they’re baby amounts
When I bite it hurts too fake (toothache) in ya mouth
I’m worth half a mill you’re change in the couch
Go check that
My brand don’t try wreck that
When I pull up it’s a wrap no xmas
You’ll feel it in your belly like ya pregnant
Likkle gyal step back
Tutus take dat
Kmt, nonsense
Bars knock em out now they ain’t conscious
Going on rude going on obnoxious
Punchlines punch off their mouth like boxers
I see me, I see me
And I see you too
You’re annoying
Like when I went in my iPhone and I seen U2
They won’t holla they won’t bark tell em woof woof
If they wanna send them shots tell em boom boom!

(Visited 969 times, 1 visits today)
https://www.iambirmingham.co.uk/2018/01/18/r-p-check-lady-leshurrs-first-freestyle-2018/https://www.iambirmingham.co.uk/wp-content/uploads/2018/01/Screen-Shot-2018-01-18-at-22.05.16.pnghttps://www.iambirmingham.co.uk/wp-content/uploads/2018/01/Screen-Shot-2018-01-18-at-22.05.16-220x140.png2018-04-11T21:41:24+00:00Staff ReporterEntertainmentMusicShowbizVideosWomxn2018,Artist,B'ham,Birmingham,Brumtown,freestyle,Hip Hop,King Wowa,Lady Leshurr,latest,Lyrics,Melesha Ogarro,music,Music Video,new,new video new track,R.I.P.,Rap,rapper,RIP,Singer,Solihull,Viral,West MidlandsBirmingham rapper Lady Leshurr is back with a new music video, all recorded, shot, edited and released within 24 hours. Directed and edited by King Wowa, 'R.I.P' is the artist's first freestyle of 2018, and has racked up over 9,000 views in its first 30 minutes of going live on...Staff ReporterStaff Reporter[email protected]AdministratorI Am Birmingham
« Does your dog have what it takes to star in Legally Blonde The Musical?
Extra Birmingham date added for Jeff Lynne’s ELO Arena Tour »