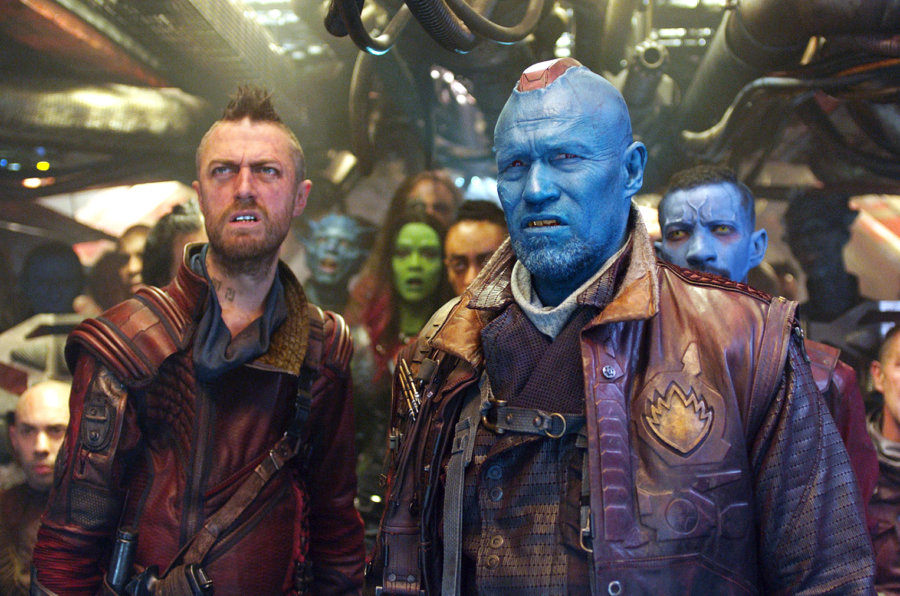 Guardians of the Galaxy stars Michael Rooker and Sean Gunn will be making their debut at Birmingham MCM Comic Con in March (Photo: Marvel/Disney)

Hollywood stars Michael Rooker and Sean Gunn, of Guardians of the Galaxy fame, have been announced as the first of many stars expected to attend this year’s first Comic Con event in Birmingham.

MCM Comic Con, the UK’s largest organiser of pop culture events, is kicking off the year with its first exciting interactive geek-fest in Brum.

MCM Birmingham Comic Con is bringing an action-packed weekend of pop culture to the NEC, when it returns to the West Midlands on Saturday 17th and Sunday 18th March.

Featuring everything from comics, movies, games and sci-fi to cosplay, anime, steampunk and online video, the weekend will celebrate the latest and greatest in geeky goodness for fans.

Playing the dynamic duo and space pirates from Guardians of the Galaxy, Michael Rooker and Sean Gunn will be making their debut at MCM Comic Con Birmingham next month.

In the Marvel superhero film and its sequel, Michael Rooker portrayed Yondu Udonta, a blue-skinned bandit who leads the Ravagers. The film’s director James Gunn (Sean’s real-life brother) created the character specifically with Rooker in mind, while borrowing the character’s mohawk and use of a whistle-controlled arrow from the comics.

Sean Gunn plays Yondu’s second-in-command Kraglin, who didn’t initially have a huge presence in the first Guardians of the Galaxy movie, but was given an expanded role in the sequel.

While Rooker and Gunn may be currently headlining the event, but joining them to meet fans over the weekend is Texan-born Brianna Hildebrand, who plays the awesomely-named Negasonic Teenage Warhead in leftfield superhero hit Deadpool, alongside Mark Sheppard who stars in Supernatural, Firefly and Battlestar Galactica.

Alongside this star-studded line-up and a host of additional TV and movie stars yet to be announced, there’s also something for gaming and animation fans.

For video game fanatics out there wanting a bite of the action, MCM is bringing glory and victory to Birmingham with four of Overwatch’s heroes in the form of Anjali Bhimani, Jonny Cruz, Carolina Ravassa and Fred Tatasciore.

All of the guests announced so far will be attending on both days of the weekend event.

“Our first show of 2018 is shaping up to be a fantastic celebration of pop culture and will set the bar for bigger and better shows across the year,”

“As the UK’s biggest and most exciting pop culture destination, MCM Comic Con dedicates everything to its fans and this is certainly one event you won’t want to miss.”

During the blockbuster weekend, fans can meet special guests from the world of TV and film, voice actors and more, while exploring the Comic Village packed with artists, writers and graphic novels; watch on-stage panels, play the latest games and check out the colourful costumes from the world of Cosplay.

MCM Comic Con was co-founded by Bryan Cooney in 2002, launched as the London Expo before being rebranded as London MCM Expo in 2004. Over a decade, Cooney developed MCM, expanding into major UK cities including Birmingham, Belfast, Glasgow, Liverpool and Manchester, attracting 300,000 pop culture fans.

In October last year, the brand was acquired by ReedPop, the US-based division of Reed Exhibitions.  ReedPop – whose first New York Comic Con event gained iconic status, partnering with the likes of Lucasfilm and Twitch – hope the merger will ensure “bigger shows, bigger guests and more explosive and interactive content” across the UK.

(Visited 2,230 times, 1 visits today)
https://www.iambirmingham.co.uk/2018/02/05/guardians-galaxy-stars-attend-comic-con-birmingham-next-month/https://www.iambirmingham.co.uk/wp-content/uploads/2018/02/Sean-Gunn-and-Michael-Rooker-in-Guardians-of-the-Galaxy-2014-Movie-Image-800x530.jpghttps://www.iambirmingham.co.uk/wp-content/uploads/2018/02/Sean-Gunn-and-Michael-Rooker-in-Guardians-of-the-Galaxy-2014-Movie-Image-300x199.jpg2018-02-05T18:48:32+00:00Staff ReporterComics & CosplayEventsGeekfestNewsShowbizWhat's OnB'ham,Birmingham,Briana Hildebrand,Brum,BrumFeed,Comic Con,ComicCon,Comics,Cosplay,Danny Aindow,Deadpool,Deadpool 2,Gaming,Geekfest,Geeks,Guardians of the Galaxy,Guardians of the Galaxy 2,I Am Birmingham,March 2018,Marvel,MCM,MCM Comic Con,MCM ComicCon,Michael Rooker,Sci-Fi,Sean Gunn,SuperheroesHollywood stars Michael Rooker and Sean Gunn, of Guardians of the Galaxy fame, have been announced as the first of many stars expected to attend this year's first Comic Con event in Birmingham. MCM Comic Con, the UK’s largest organiser of pop culture events, is kicking off the year with its...Staff ReporterStaff Reporter[email protected]AdministratorI Am Birmingham
« Justin Timberlake to launch UK leg of World Tour in Birmingham
Midlands artist launches crowdfunding campaign to send her show to Edinburgh Fringe Festival »