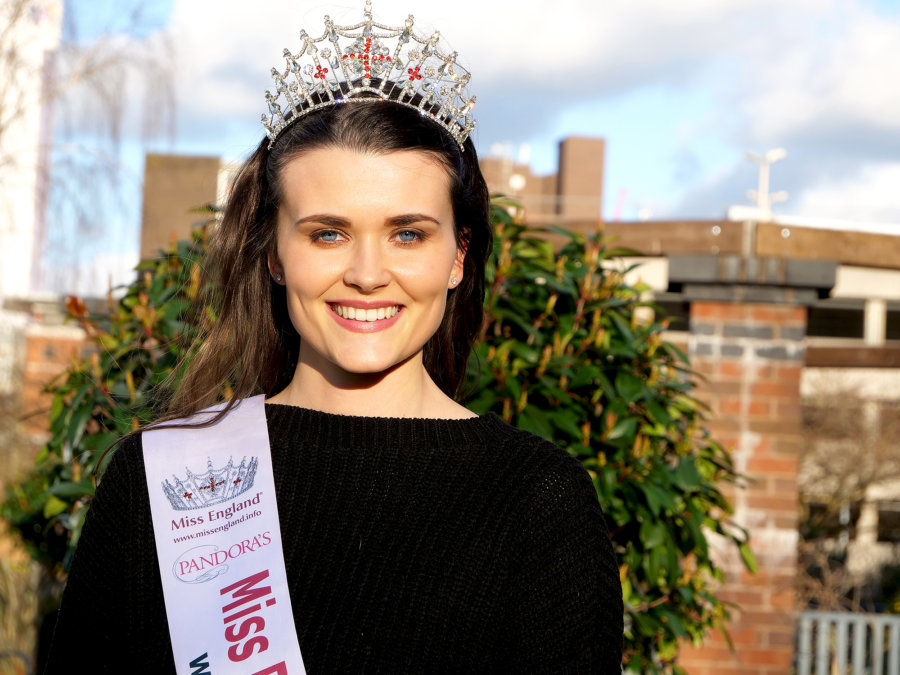 Niamh Conway has been Miss Birmingham for a whole year. This time last March, the 22-year-old was an aspirational but shy university graduate who struggled with major confidence issues, before surprising herself and being crowned Miss Birmingham 2017/18.

Fast forward a few weeks shy of 365 days and the former public relations worker from Sutton Coldfield has not only overcome her fear of speaking to new people, but being thrown into the thick of it has shaped her into an impressive outgoing, uber-confident and firmly outspoken public figure with a passion for empowerment and altruism.

“Being Miss Birmingham made me confident in meeting people and gave me a platform to go to a lot of events alone, speaking at many of these public events. I was thrown in the deep end and I like that because it pushes you.

“One of the main things I said I wanted to do when I became Miss Birmingham was to help young people with low self esteem, and have been going into schools to give talks to help students, including a visit to a school in Ireland to give a talk there too.”

Back in 2015, an anxious Niamh entered Miss England in a bid to force her to confront her reserved disposition. Although she didn’t win, the experience encouraged her to return for another attempt at the title in 2017.

Again, she didn’t win the national accolade but did make the finals, finishing 12th out of 50 contestants. But that wasn’t all. The former broadcast journalism student was crowned Miss Birmingham last May; and also holds the distinction of being Miss Charity Birmingham for raising the most money out of all the contestants (jointly with current Mr Birmingham title-holder Andrew “Stelly” Stylianou).

Of course, being a former PR professional came in handy when Niamh was awarded the title of Miss Publicity England for generating the most individual media coverage in the build up to the national contest. She won a trip to Sri Lanka for her efforts, to which she escapes in May with seven of her counterparts.

However, while the reign of current Mr Birmingham Andrew Stelly continues until March 2019, Miss Birmingham’s time in the prestigious role draws to a close this weekend (March 18) as new hopefuls vie for the honour to represent their home cities, in a competition ceremony being held at the Birmingham Conference and Events Centre (BCEC).

After giving up her day job to secure the now fulfilled single-year term as Miss Birmingham, Niamh’s journey towards inspiring broad representation, public speaking and charity work has only just begun. She has already been invited back to compete for the Miss England title, starting with the Semi Finals in July ahead of the Grand Finals in September.

And while she won’t as yet personally participate in catwalk shows and traditional beauty pageants until she feels ready for that leap, the former Erdington high school student has warmly embraced modelling, taking part in several photoshoots these last two years.

“It’s a shame some beauty pageants get a negative response. If people got to really understand what’s involved in them, their perception would change. I know I’ve changed my family’s perception by showing them what I’ve achieved as Miss Birmingham, and showing what other title holders have done, including the current Miss England. It’s more than putting on a pretty dress and walking down a catwalk. Together, the Mr and Miss England finalists raised £31, 000 for charity as part of the competition last year.”

#1  She was an awkward shy “turtle” teenager

Back in secondary school, Niamh was unable to speak to people and describes her younger self as an awkward “turtle” teenager. She struggled to fit in, tried to please people and make them like her. Such was her timidness, she couldn’t even raise her hand in school to answer questions in class.

It was so bad that despite attending netball sessions in school for 9 years, she didn’t make a single friend from any of the teams.

“Looking back now, I wish I had been more confident. Sharing talks about my experiences and journey now, teachers often tell me that kids talk about what I said for weeks after. It makes me laugh to be told I’m an inspiration because I don’t see myself as inspiring. Even if I help one person in some way, that’s cool with me.”

#2 She made the finals of Miss England

Niamh didn’t really consider competing in the Miss England contest when she’d won the Miss Birmingham title, so was very surprised to make last year’s finals of the nationals too.

Describing it as “a great experience”, she’s looking forward to doing it again later this year.

Nimah gave up her job as a PR professional, working primarily for Land Rover, to become Miss Birmingham.

“I got promoted at the job just before I won the contest. After being crowned Miss Birmingham, I handed in my work notice, despite bosses having a contact of promotion ready.

“I just knew I wanted to make the most of it for a year, and knew it would go so quickly so wanted to grab every opportunity. I was missing loads of opportunities by being at work 9 to 5, so it was definitely worth giving up. It had to be a genuine commitment if I wanted to make it work.”

#4  She is a professional model

Niamh has been modelling professionally for two years. At 5 foot 4 inches, she admits “it’s a bit harder” than for most, but she plans on keeping at it and has done throughout her year as Miss Birmingham.

Her main career drive at present is promotional and photographic modelling, including facial and hair work.

“Everyday is a new fun experience, whether it’s meeting new people or just gaining experiences you wouldn’t normally expect. I want to change people’s perception about what a model is, we come in all shapes and sizes and that’s a good thing”.

#5  She vlogs and wants to be a TV presenter

Having studied Broadcast Journalism at Staffordshire University, Niamh dreams of becoming a television presenter. In fact, one of the main reasons her parents totally backed  her Miss Birmingham entry was because of how the role could (and did) encourage her public speaking and networking skills.

In the role, she hosted numerous events, including a 21st Century Entrepreneurs launch event which initially left her “absolutely terrified” but it wasn’t long before she was getting the hang of stepping up to the podium, despite being generally “petrified” of making speeches.

Niamh set up a YouTube channel to gain experience of sitting in front of camera, and mainly shares fashion and beauty content, things she learns from the people she works with, and the occasional vlog. In December, she was invited to the Cinderella VIP night at Hippodrome and filmed a vlog of the event.

Miss Birmingham Niamh and Mr Birmingham attended the annual ‘Curry King‘ event in the city, a fundraising get together organised by Love Brum.

It was her first time at the function but the charitable aspect of the celebration appealed to her. A total of £7,000 raised by Mr and Miss Birmingham contenders was donated to the Love Brum’s charity pot, which went towards providing wheelchairs for young people.

“That was really really special,” she explained upon seeing photos of the recipients on the wheelchairs.
#7  She’s a rugby fan

Rugby is a family tradition for Niamh, and with her step-dad’s family being from New Zealand, she’s naturally an All Blacks fan.

Although there’s plenty of sporting family rivalry when it comes to Ireland, England and New Zealand locking horns on the pitch.

#8  She’s proud of her Irish heritage

Now a proud Brummie, Niamh was born in London. Her mum’s from Ireland, while her father (also of Irish heritage) was born in the Capital like her.

“I’m proud of my Irish heritage. Mum told me that I had won a Bonny Baby Competition at the annual Ballycroy Festival in the Republic of Ireland as a “tiddler”.

“All throughout my childhood, we’d been to Ireland a million times, it’s very friendly, I love the accent. I take part in St Patricks’ Day and anything Irish. My mum will always take good advantage of anything Irish!”

(She’ll be well chuffed this feature went out on St. Patrick’s Day then).

#9  Committed to working with vulnerable individuals

Niamh is passionate about helping the homeless and raising awareness about the plight of rough sleepers and the needy. She volunteers at her local Trinity Church in Sutton every last Thursday of the month, delivering food and soup to those on the streets.

“I bake loads of cakes and send them with them,” she explains.

“I’ve been helping them with their work. It was one of the top things I got to experience this year. I went with them and met some of the women who suffer domestic abuse and helped them through tough times with new accommodation, and new identities. They shared their stories with me. I’ve lived a bit of a sheltered life, so had never heard first hand testimonies except on TV.

“It was hard to listen to but was something people need to hear. Until you hear and come face-to-face with someone who has experienced these things, it doesn’t always seem very real, so it’s a charity very close to my heart and I want to stay updated on what they do with hostels in the future.”

#10 Standing up to bullying

Niamh has used her platform as Miss Birmingham to visit as many schools as possible, sharing positive motivation and support with pupils and students in England and Ireland.

She hopes to volunteer with many more schools and continue to inspire them “for as long as I can”.

“I talk to young students about bullying, coping with low self-esteem; sharing my experiences and trying to give some help through confidence workshops. Having such positive feedback from the students and teachers, makes me burst with happiness! This is one of the most rewarding things I have ever done and I am so looking forward to continuing to do it.”