Cage Warriors Featherweight Champion to be decided in Birmingham 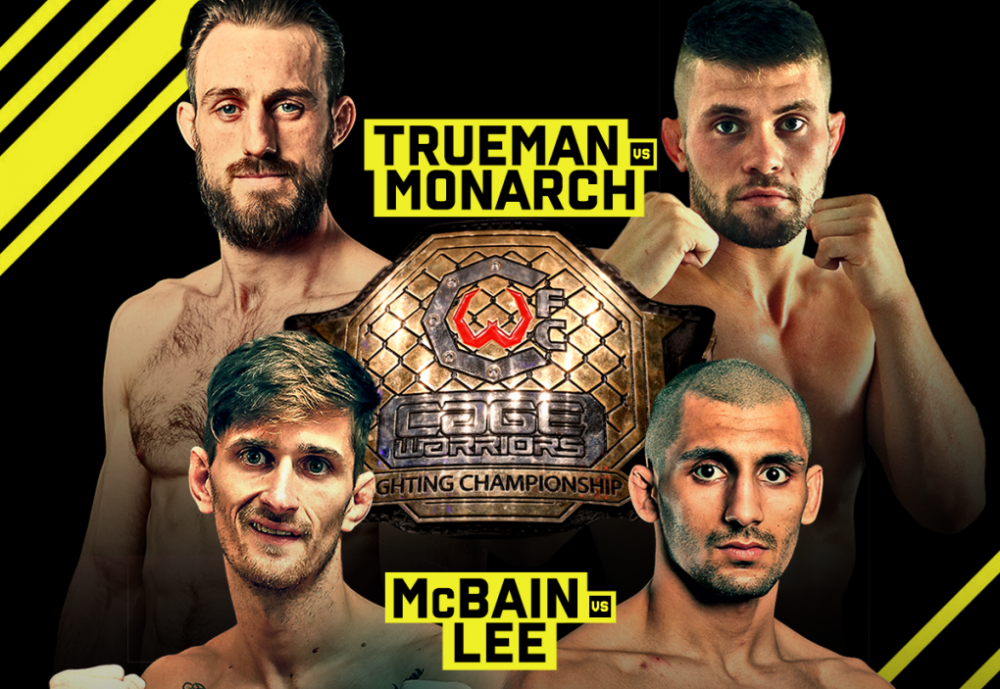 Dean Trueman takes on Lewis Monarch, and Aiden Lee faces off against Paull McBain at the Genting Arena in Birmingham for Cage Warriors 98

One of the most prestigious titles in European MMA – the Cage Warriors featherweight title – will be decided by a four-man tournament across two blockbuster events in Birmingham.

The most recent example of this was Cage Warriors’ last featherweight champion – Nad Narimani – whose impressive title-winning victory over Pimblett saw him snapped up by the UFC.

Narimani’s UFC call-up means the title is now vacant, and Cage Warriors can now officially announce a four-man tournament to determine the next 145-pound champion, with a quartet of the best 145-pounders on the continent set to battle for the belt.

The tournament will kick off with the two semi-finals at Cage Warriors 98 on Saturday, 20 October, as Dean Trueman takes on Lewis Monarch, and Aiden Lee faces off against Paull McBain at the Genting Arena in Birmingham.

Cage Warriors 98 marks the occasion of the organisation’s first event in Birmingham for eight years, and Cage Warriors president Graham Boylan said he plans on delivering a blockbuster show for the city’s passionate fight fans.

“We’re excited to return to Birmingham and to give these four athletes the chance to fulfil their dream of being the CW champion,” he said.

“We’re going to stack this card and have more big fight news to come in the coming days and weeks. Get your tickets early. This one’s going to be big.”

The Rough House-trained contender has an 8-4 record, but is in excellent form having won four of his last five bouts.

The Derbyshire man has finished five of his eight wins, including a highlight-reel knockout of Arnold Quero at Cage Warriors 79.

Most recently, Trueman defeated Corrin Eaton in a three-round war on Super Saturday at Cage Warriors 92 in London in March, and now he has his sights set on tournament victory and that big gold belt.

Former lightweight campaigner Lewis Monarch has dropped down to 145lbs and plans on becoming king of the weight class after the 10-3 contender signed a multi-fight deal to compete for Cage Warriors last week.

In his latest outing, Monarch finished Brazilian Carlos Eduardo de Azevedo by first-round TKO and is now ready to step into the Cage Warriors featherweight tournament and continue that form when he faces Trueman in the first semi-final matchup.

Birmingham’s own Aiden Lee is sure to receive huge crowd support when he takes to the cage at the Genting Arena.

The 6-2 contender reeled off a hat-trick of first-round submission wins in Cage Warriors in 2017, and most recently claimed a unanimous decision victory over Tom Mearns in London at Cage Warriors 92.

Now confirmed for the Cage Warriors featherweight tournament, Lee will look to leverage his hometown advantage to see off the challenge of fellow contender Paull McBain and book a spot in the tournament final.

Undefeated Scot Paull McBain made his Cage Warriors debut in January 2017 as a 2-0 prospect and hasn’t looked back since.

Now 5-0 after a hat-trick of wins under the Cage Warriors banner, McBain heads into the second semi-final of the featherweight tournament looking to earn a spot in the final and become the first Scottish fighter to capture Cage Warriors championship gold since Stevie Ray held the lightweight title.

Cage Warriors 98 is on at the Birmingham Genting Arena on Saturday 20 October 2018.
For the latest news, tickets and updates from Cage Warriors, visit www.cagewarriors.com.