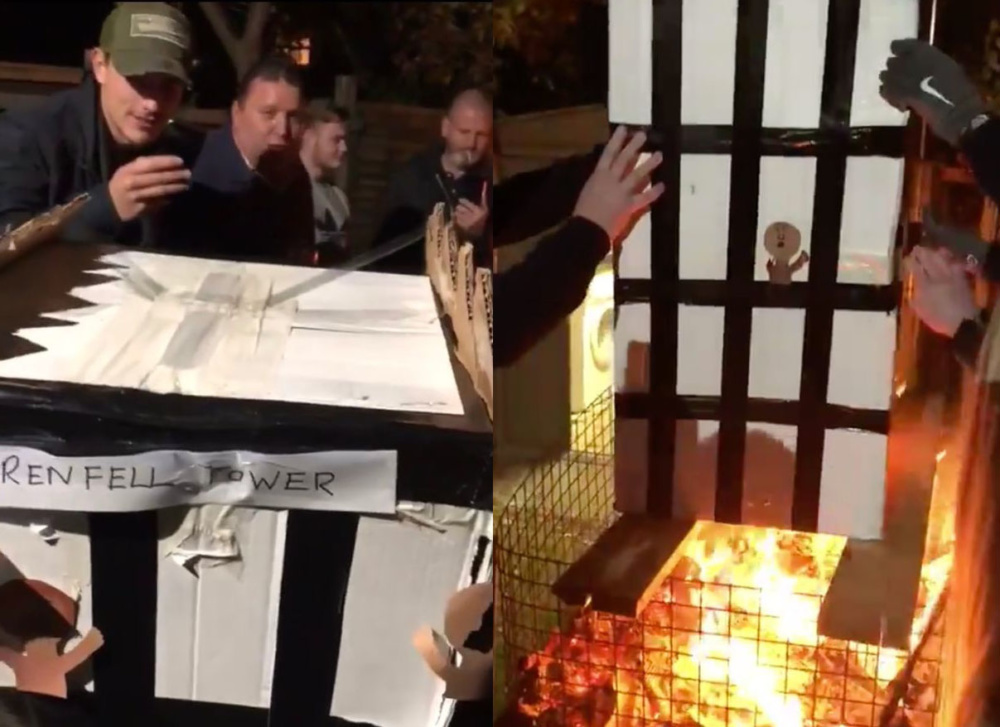 Shocking footage has emerged of a group of people laughing as they burn a cardboard model of Grenfell Tower on an outdoor bonfire.

Branded as “sickening and disgraceful”, the video – which has been shared widely across social media – shows a home-made model of the tower being set alight.

In the clip, individuals can be heard repeatedly laughing and jeering as the model, which features cutout drawings of people in distress at the windows, goes up in flames on top of a wooden pallet.

Audio of a woman in the video is heard, in which she says: “Bye everyone. Bye,” as onlookers laugh and joke about the incident.

The majority of the cardboard figures featured in the Grenfell Tower mock-up appear to be brown, including one which is shown dangling off the building, suggesting he may have jumped. The bonfire appears to be taking place in a garden, as a St. George’s flag is briefly shown in the background. Commentators have described the incident as “racist”.

Commander Stuart Cundy said: “I am frankly appalled by the callous nature of the video posted online. To mock that disaster in such a crude way is vile. Any offences that have been committed will be fully investigated.”

How could these disgusting people do this to the families of Grenfell Tower. Pure evil racism in 2018. pic.twitter.com/20UHkU1QBh

A total of 72 people were killed in the Grenfell Tower fire in west London last year, in June 2017.

The Justice4Grenfell campaign group believes the video “has caused great alarm and distress”.

They said: “This is clearly a hate crime and as a society we should never tolerate these types of blatant acts of hatred. We have an expectation that the police will look into this robustly and that the perpetrators will face the full force of the law.”

Shadow home secretary Diane Abbott wrote on Twitter: “This is sickening and disgraceful behaviour. I am disgusted that people would behave in such a hateful way.”

The source of the video has not yet been confirmed and the individuals featured in the footage have not been identified.

(Visited 838 times, 1 visits today)
https://www.iambirmingham.co.uk/2018/11/05/sickening-video-emerges-group-burning-effigy-grenfell-tower-outdoor-bonfire/https://www.iambirmingham.co.uk/wp-content/uploads/2018/11/Grenfell-Tower-effigy-on-bonfire-in-November-2018-a-800x582.jpghttps://www.iambirmingham.co.uk/wp-content/uploads/2018/11/Grenfell-Tower-effigy-on-bonfire-in-November-2018-a-300x218.jpg2018-11-05T19:02:40+00:00Staff ReporterCrimeNewsRacismVideosArson,bonfire,cardboard,disgusting,disturbing,effigy,Facebook,Fire,footage,Grenfell,Grenfell Tower,Hate Crime,London,model,set alight,Twitter,Video,West LondonShocking footage has emerged of a group of people laughing as they burn a cardboard model of Grenfell Tower on an outdoor bonfire. Branded as 'sickening and disgraceful', the video - which has been shared widely across social media - shows a home-made model of the tower being set alight. In the clip, individuals...Staff ReporterStaff Reporter[email protected]AdministratorI Am Birmingham
« Diwali 2018: What does Diwali mean to Brummies?
VIDEO: Audience reactions to ‘The Full Monty’ at Birmingham Hippodrome »