UB40 Honoured on Walk of Stars 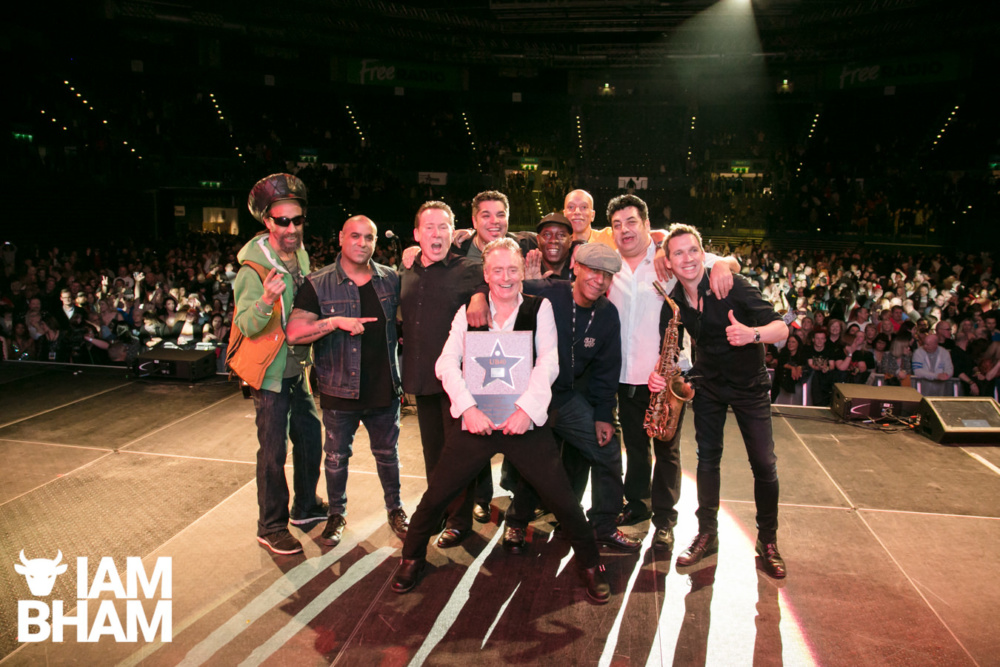 UB40 were honoured on the Birmingham Walk of Stars, Birmingham’s equivalent to the Hollywood Walk of Fame; with a star of their own for the impact they have made with their music.

UB40 was formed in 1978, by brothers Ali and Robin Campbell with a multi-cultural line-up (of English, Welsh, Irish, Jamaican, Scottish and Yemeni parentage friends) that reflected the working class communities they grew up in, in Birmingham. They copied the Jamaican reggae, ska and lovers rock sounds they grew up loving and got a huge break when Chrissy Hynde invited them to support The Pretenders tour.

Their name comes from the Unemployment Benefit form 40, the paper issued by the Governments Department of Employment for claiming the dole, similar to todays JSA (Job Seekers Allowance) Form.

On the night of their Christmas Party Gig that will lead into their 40th Anniversary Tour, in their home town UB40 were honoured with the award presented by Comedian Jasper Carrott, Lord Mayor of Birmingham Councillor Yvonne Mosquito and Mike Olly from Westside BID.

To be considered for a nomination the ‘star’ has to have made a recognisable impact and have performed in one of Birmingham’s major venues or have originated from or have prominent links to the area.

UB40 have definitely ticked all of these boxes. They have had considerable international success, in their height they sold 120 million records and were one of the biggest selling bands of the 1980’s. They were nominated from Brit Awards and Grammy’s and have collaborated with artists such as Lady Saw, Chrissy Hynde and 808 State. They all originate from the City and many of them still live here today.

Continuing in the path of their working class roots the band launched #UB4Corbyn in 2016 in support of Labour Party Leader Jeremy Corbyn, who they hailed as an incorruptible politician who would put working people first.

With a 30 year career behind them the band took an unexpected twist in 2008 when Ali Campbell the lead singer and arguably one of the most recognised faces of the band, announced he was leaving. No one could have guessed what would happen next, other founding members of the band also left and teamed up with Ali Campbell, while some members continued on with Robin Campbell (joined by new members), with both bands using the UB40 name. So there are currently two UB40’s, both touring, performing much of the same material, with original members. Another 40th Anniversary Tour will begin with the other UB40 (featuring Ali, Astro and Mickey Virtue) in March 2019.

This accolade belongs to them all.

(Visited 1,600 times, 1 visits today)
https://www.iambirmingham.co.uk/2018/12/24/ub40-honoured-on-walk-of-stars/https://www.iambirmingham.co.uk/wp-content/uploads/2018/12/MG_8281-800x534.jpghttps://www.iambirmingham.co.uk/wp-content/uploads/2018/12/MG_8281-300x200.jpg2018-12-24T08:46:23+00:00Denise JamesCommunityEntertainmentHistory & HeritageMusic40th Anniversary,Arena Birmingham,Award,Awarded,band,Birmingham,concert,honoured,jasper carrots,major,mike olly,Reggae,Stage,UB40,Walk of Stars,Westside BID,Yvonne MosquitoUB40 were honoured on the Birmingham Walk of Stars, Birmingham's equivalent to the Hollywood Walk of Fame; with a star of their own for the impact they have made with their music. UB40 was formed in 1978, by brothers Ali and Robin Campbell with a multi-cultural line-up (of English, Welsh, Irish, Jamaican,...Denise JamesDenise James[email protected]AuthorI Am Birmingham
« Brummies mark International Migrants Day with stories of new friendships
UB40 put on a Christmas Concert and Afterparty for Loyal Fans »