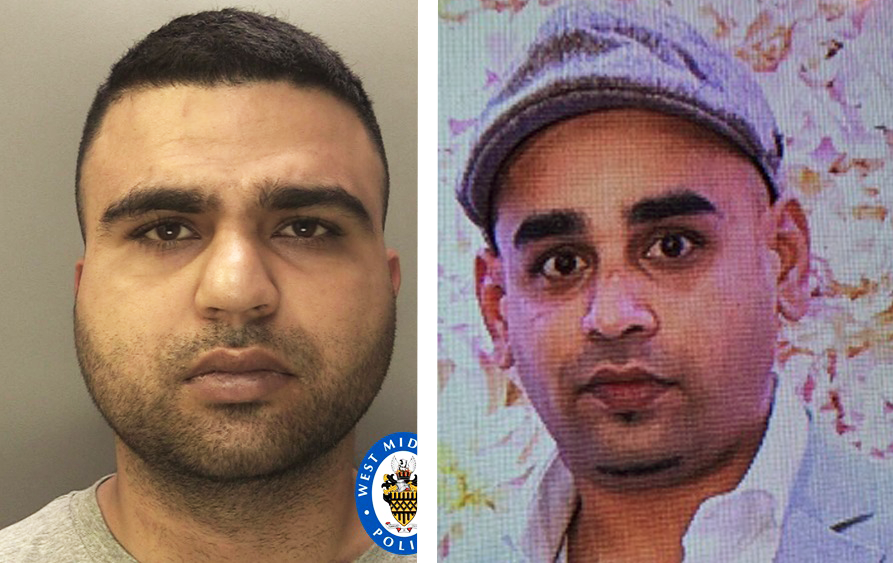 A drug dealer who stabbed a father-of-four and left him to die in a Birmingham street has today been convicted of murder after police found the two “Rambo-style” knives used in the brutal attack hidden at his home.

Malik Hussain was fatally stabbed and dumped in a street after a row erupted when he and a friend got into a car with Haseeb Mirza and another man, outside a nightclub in Digbeth and drove to Sparkbrook.

A dispute broke out in the car which resulted in 26-year-old Haseeb Mirza and the other man stabbing their passenger several times in the chest.

Mr Hussain was dragged from the car in Baker Street by the two men and in a final vicious act, Mirza stamped on the 35-year-old father-of-four as he lay dying in the road.

While passers-by, police officers and medics tried in vain to save Mr Hussain, Mirza drove back home to Small Heath, where he took a taxi back past the nightclub and on to the scene of the killing – before heading to a ‘drive thru’ and ordering food.

Within hours Mirza tried to flee the country, but detectives tracked him to a Travelodge in Yardley. When he was arrested cocaine and cannabis with a street value of £1,000 was found stashed under a mattress in his room.

And during a search of his home in St Benedicts Road, two Rambo-style knives were found.

Mirza had denied killing Mr Hussain on 12 July last year, but following a three-week trial at Birmingham Crown Court, he was today convicted of murder. He will be sentenced tomorrow (Thursday).

Less than 24-hours after the killing, the second offender fled the country. He is still wanted for questioning.

Following the verdict Mr Hussain’s family paid tribute to him: “Malik was a kind hearted, generous caring son, brother, husband and father. He would do anything to help his family and anyone that knew him. Life will never be the same without him. He will always be missed on special occasions, at birthdays, family get togethers and weddings. We miss his jokes and his laughter. His smile was enough to brighten up the whole room.

“Malik was the brave one of our family. Family meant everything to him and he was everything to us. There is not a member of our family that has not been severely affected by what happened to Malik on that night leading to his untimely death.

“Words cannot describe the pain and heartbreak our family has gone through and will continue to go through for the rest of our lives.”

Detective Inspector Michelle Allen, from the force’s homicide team, said: “This was a murder which shocked the local community and we have worked flat-out to get this conviction.

“Malik’s family are truly devastated by his death and although they are still trying to come to terms with their loss, we hope this successful prosecution goes some way to providing some of the answers they so desperately needed.

“Our investigations are very much ongoing and we are doing all in our power to trace the second man in the car and bring him before the courts.”

DI Allen added: “Once again we are seeing the devastating impact that knife crime has, not only on the victim, but their family and the wider community who are left to grieve such a senseless loss.

“There is no excuse that carrying a knife is for protection and as a force we are determined to bring those who do so to justice.”

For more information on what to do if you suspect anyone of carrying a knife, visit: www.west-midlands.police.uk/your-options/knife-crime.