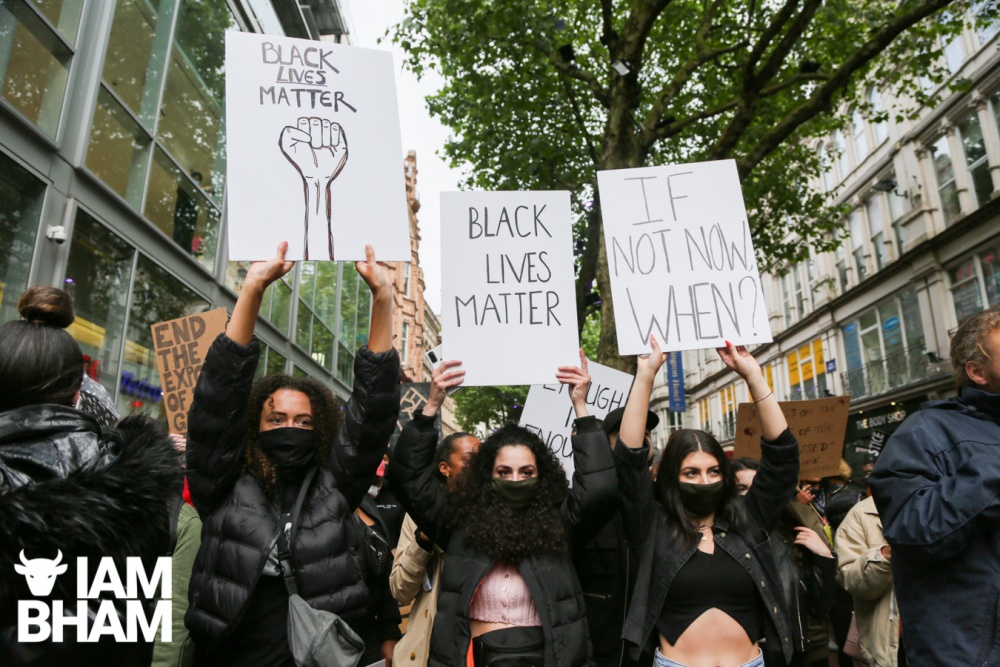 Birmingham city centre was packed with thousands of ‘Black Lives Matter’ protestors on Thursday afternoon to show solidarity for George Floyd, who died as a result of US police brutality on May 25 in Minnesota.

The shocking death of the black victim, who kept pleading ‘I can’t breathe’ as a white officer pressed his knee on the victim’s neck as he lay sprawled and handcuffed on the concrete pavement, has sparked protests and outrage across the USA and around the world.

Although there is no official record, it is estimated around 5,000 people attended the ‘Black Lives Matter’ demonstration for George Floyd in Birmingham yesterday.

The Birmingham solidarity rally was organised by a student group called The UK Isn’t Innocent. The original plan by the organisers was to host the demonstration in Victoria Square, directly outside the Council House.

However, as the protest started at 4pm, it quickly became apparent the space in Victoria Square would prove to be inadequate for the large number of demonstrators who were streaming into the area.

The organisers moved the demonstration to the larger space outside the Library of Birmingham in Centenary Square to accommodate the growing numbers.

The demonstrators expressed their frustration at the lack of real change in the fight against injustice and demanded an end to institutionalised racism and police brutality in the UK.

Hannah Ringane, the lead organiser of the protest, has herself experienced racism from a very early age in the UK.

She said: “We are tired and we have been tired for too long.

“We have been taught that we won’t be treated the same as everyone else, that we will be viewed as aggressors.

“We want to see real change. We’re tired of politicians making speeches and failing to deliver on their promises.

“The killings and beatings have to stop.”

More and more protestors arrived to join the demonstration and in a short space of time Centenary Square was packed with people holding up banners and placards with slogans that highlighted racism and police brutality.

Prior to Thursday’s gathering, anti-racism protests inspired by the death of George Floyd took  place in London last weekend followed by one on Monday night in Soho Road, Birmingham.

Cllr Ian Ward said he stands in “solidarity with black communities” and issued support for the demonstration.

He added: “Birmingham stands in solidarity with black communities across the world.

The Birmingham protest went ahead in a peaceful and well conducted manner with no reports of disorder or violence, and police confirmed no arrests were made during the demonstration.

Individuals of all races and backgrounds, including families, attended the peaceful demonstration.

A spokesperson for West Midlands Police said: “The protesters were loud and passionate, and made their voices clearly heard, but there were no arrests and no disorder.”

There is fury surrounding the treatment of black people at the hands of West Midlands Police and six cases of racism and police brutality are currently under investigation since the start of the this year including the brutal beating of a 15-year-old boy in the Newtown area of Birmingham in April.

The excessive use of violence and stun guns against black suspects has caused anger and resentment amongst the black community of Birmingham.

The demonstrators demanded full and fair investigations into each pending case of police brutality and for strict punishments issued to racist and abusive officers who bring shame to the law.

However, despite feelings and passions running high, the demonstrators remained calm and peaceful during the protest.

Talking about the turnout for the demonstration, Hannah added: “There are no words for the amount of love and support that was shown today.”

After 6pm the protestors marched to the Council House in Victoria Square where hundreds of people knelt down on one knee to show solidarity with George Floyd.

Some of the people marched through Colmore Road and headed towards Lloyd House, the headquarters of West Midlands Police, while others marched through New and went in the direction of Dale End chanting anti-racism slogans.

The demonstrators chanted “No Justice, No Peace” and “Justice Now” once they arrived at Lloyd House and several speakers gave speeches to the crowds that thronged the space.

The crowds remained calm as speakers offered tributes and remembered the tragic death of George Floyd.

The organisers were stunned by the number of people who came to show support and issued a statement thanking the people for attending and praising their peaceful behaviour.

A spokesperson for The UK Isn’t Innocent said: “From all of us, thank you so much. We started planning just four days before the protest to make a change.

“We planned for an event of 200 people as a maximum.

“To be told that the demonstration today was Birmingham’s biggest ever is news we never thought we’d hear, and so from all of us, thank you.

“This wouldn’t have been possible without your support.”

Once the speeches were over the people began to disperse peacefully and the demonstration concluded around 7pm.

The organisers stayed behind as the crowds left and the students worked in groups to clear up the litter and ensured the spaces used by the demonstrators were left clean and tidy.

The mass demonstration was praised by council leaders, police and by West Midlands Mayor Andy Street.

West Midlands Police Commissioner David Jamieson, said: “This is a cause that I am very supportive of.

“I am pleased that the protest has concluded without incident.”

The success of the protest has galvanised the organisers and the group stated this was only “the beginning” and the voice of those who have experienced racism, abuse and police brutality will not be “silenced.”

Further ‘Black Lives Matter’ solidarity protest rallies for George Floyd are being planned in the Midlands and Black Country, including protests in Wolverhampton and Coventry on Sunday.