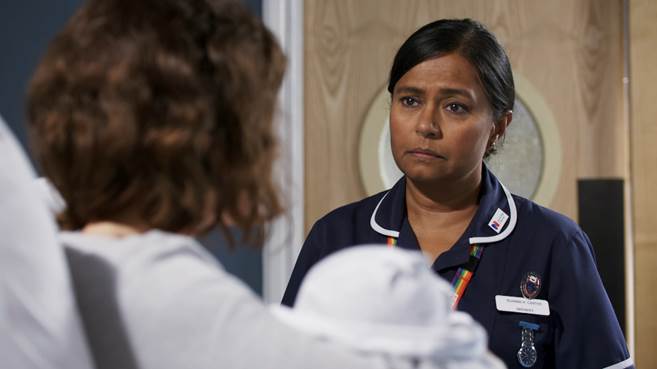 BBC One’s daytime drama Doctors returns to filming today, with production having been on pause since March due to lockdown; other than a special episode in early June, entirely self-shot by the cast at home on their mobile phones.

The popular medical soap opera – launched in March 2000 – is primarily filmed in Birmingham and recently celebrated its 20th anniversary with a special episode broadcast just as the COVID-19 lockdown began earlier this year.

The show’s 1.6 million viewers enjoyed the hour-long episode ‘A Day at the Mill’ at the end of March, which featured guest stars Georgia May Foote and Matt Bardock.

Unlike the drama’s regular episodes, the special anniversary broadcast was inspired by real-life TV shows like 24 Hours in A&E and followed a documentary crew recording a day in the life of the fictional Mill Health Centre in Birmingham, with the main characters doing talking heads interviews to camera whilst dramatic events unfolded onscreen.

However, being broadcast at the start of the nation’s lockdown period forced the show to cease production in line with TV shows and film studios across the world. Now, as government restrictions have eased, production of the West Midlands award-winning hit has resumed.

Mike Hobson, Executive Producer comments, “It’s been a long process of preparing the set, the crew and actors, to make sure we are working in the safest environment possible. We have been chomping at the bit to get back filming, especially as the audience loved our special Zoom episode.

“We are looking forward to picking up where we left off, and continuing to create great storylines full of humour, while raising awareness of serious issues, and of course, creating a bit of drama!”

The Doctors’ production team at BBC Studios have developed comprehensive production protocols to ensure that the series is produced in a safe and responsible manner. Social distancing will be adhered to in accordance to current government guidelines.

The crew will be picking up where, they left off, and audiences will finally get to see whether The Mill’s resident midwife, Ruhma, will still be suspended after she was caught kissing a patient’s husband.

Doctors follows Eastenders and Holby City as the third of BBC One’s continuing dramas for the BBC to go back into production.

The show prides itself on promoting local talent and and enrolling cast and crew from Birmingham, where it is filmed and based. Actors who have appeared on the show during its twenty-year run include stars Richard Briers, Brian Blessed, Jodie Comer, Davood Ghadami, Phoebe Waller-Bridge, Sheridan Smith, Tom Ellis, Nicholas Hoult, Antonio Aakeel and Eddie Redmayne. On average there are 800 plus guests a year supplementing the core cast of 12.

Doctors is a BBC Studios production for BBC One and will be back on screens later this year.