Birmingham’s iconic Selfridges building to get a dramatic new makeover 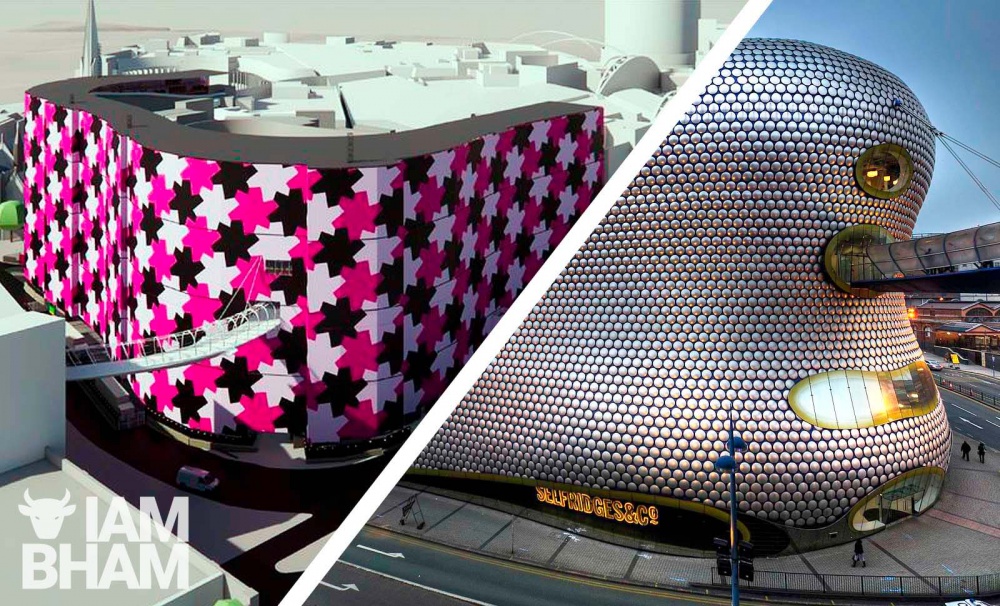 Birmingham’s iconic Selfridges building is to get a dramatic new look as it undergoes a makeover.

The city landmark will be enveloped in a bold eye-catching pink and black wrap while the original design is cleaned and repainted.

The famous department store in the Bullring shopping centre will have all of its 15,000 iconic silver-coloured disks removed and then be re-painted in its original Yves Klein blue, before the disks are then reattached.

But while this extensive and painstaking work takes place, the facade of the building will be dressed up in a new temporary outer cover to ensure it continues to stand out from the architectural crowd.

A Birmingham fashion designer has been tasked with designing the provisional exterior for the building, creating a striking piece of public art which will be wrapped around the Selfridges building for over a year.

Osman Yousefzada has created a CGI concept design consisting of striking pink and black dogtooth cladding in partnership with the city’s Ikon Gallery. Dubbed ‘The Dogtooth Flower’, the giant hoarding will be secured around the building while work to make it more eco-friendly is undertaken.

The renovation work is due to begin this autumn and be completed ahead of the 2022 Commonwealth Games without any major imposition of regular trading, but shoppers and commuters have been warned minor access restrictions and travel disruptions are to be expected.

A spokesperson for Bullring co-owners Hammerson, who will be conducting the work, said: “We are proud the Selfridges building has gained icon status for its design and we want to ensure it maintains its pride of place both in Birmingham and the UK.

“The design and construction of the building means we have made the decision to undertake these upgrade works now to ensure the building’s long-term future while improving its environmental performance.”

Responding to being chosen to design the creative commission, celebrated Brummie fashion designer Yousefzada said: “I feel very lucky to have been selected from a shortlist of acclaimed international artists asked to design the scaffolding wrap.

“As an artist and designer, whose clothes have been stocked at Selfridges since my first ever collection, it is amazing to think I will be dressing Selfridges itself.

“This will be my first piece of public art and to be able to do it on such a scale is truly exciting. I can’t wait to see it completed.”

Selfridges in Birmingham is an iconic landmark building in the city. Part of the Bullring Shopping Centre, it primarily houses Selfridges Department Store.

The building was completed in 2003 at a cost of £60 million and was designed by the architecture firm Future Systems. Consisting of a steel framework with a sprayed and curved concrete facade, the exterior of the structure of comprises 15,000 anodised aluminium discs mounted on a dark blue background. The mildly twisted facade wraps around the corner of Moor Street and Park Street.

The architecture firm Future Systems were appointed by Selfridge’s then chief executive, Vittorio Radice, to design only the third store outside London.

Although Selfridges was physically integrated with the Bullring Shopping Centre the client wanted a distinct design approach which would set the store apart from the rest of the development and become an instantly recognisable signpost for the brand.

Since its construction, the building has become an iconic architectural landmark and seen as a major contribution to the regeneration of Birmingham. In 2009, It was also included as a desktop background as part of the Architecture theme in Windows 7.

Weathering and city centre pollution requires the building to be regularly cleaned, including its 15,000 discs, some of which have been known to displace and fall off from time to time. The planned revamp will be the first time the entire exterior has had major renovation overhaul.

Since launching his eponymous label in 2008, Osman Yousefzada has forged a niche in luxury womenswear, exploring and cross pollinating with other creative disciplines and garnering numerous awards.

Osman’s family background gave him a grounding in both technique and aesthetics. He grew up in Birmingham, in an extraordinarily conservative and religious environment. The son of Afghan and Pakistani migrants, he comes from a family of artisans – his father was a carpenter from a long line of carpenters, his mother was a tailor. He could cut and sew before he was ten.

His formal training and education included fashion stints at Central St Martins in London to an MPhil at Cambridge University, and anthropological studies at the School of African and Oriental Studies in the capital. The result is what he calls a “migrant soup” aesthetic – a rich mix of theology, ritual, contemporary European art and the crossing of continental and cultural borders.

With the opening of the House of Osman in Fitzrovia in 2018, in a historic Georgian townhouse in Fitzrovia, he unveiled a vision of the future of his brand – a holistic world of art and design.

He was nominated for the Designs of the Year Award at the Design Museum in 2008 and shortlisted for the Frieze Art Award in 2014.

He was shortlisted for the BFC/Vogue Designer Fashion Fund the same year and has been shortlisted every year since. He has a strong history collaboration – from Mango and John Lewis to the avant-garde.

In June 2018 he staged his first solo art exhibition, Being Somewhere Else, a show about cultural displacement, and the female experience of dominance and, subsequently, empowerment at the Ikon Gallery in Birmingham.

In January 2020, he received a honorary doctorate from Birmingham City University.

(Visited 7,070 times, 4 visits today)
https://www.iambirmingham.co.uk/2020/09/11/birminghams-iconic-selfridges-building-get-dramatic-new-makeover/https://www.iambirmingham.co.uk/wp-content/uploads/2020/09/Selfridges-Birmingham-renovation-cladding-by-Osman-Yousefzada-800x485.jpghttps://www.iambirmingham.co.uk/wp-content/uploads/2020/09/Selfridges-Birmingham-renovation-cladding-by-Osman-Yousefzada-300x182.jpg2020-09-11T12:20:59+00:00Staff ReporterArchitectureBusinessFashionNewsRetail2022 Commonwealth Games,Architecture,B'ham,Birmingham,Birmingham City University,Brum,Brummie,building,Bullring,department store,Design,fashion designer,Future Systems,Hammerson,I Am Birmingham,Icon,Iconic,Osman Yousefzada,renovation,Retail,Revamp,Selfridges,Selfridges building,Shopping,silver discs,Store,structure,WorkBirmingham's iconic Selfridges building is to get a dramatic new look as it undergoes a makeover. The city landmark will be enveloped in a bold eye-catching pink and black wrap while the original design is cleaned and repainted. The famous department store in the Bullring shopping centre will have all of its 15,000...Staff ReporterStaff Reporter[email protected]AdministratorI Am Birmingham
« Church gunman suspect arrested after flat raid in Walsall
Birmingham coronavirus lockdown restrictions increased as infection rate rises »