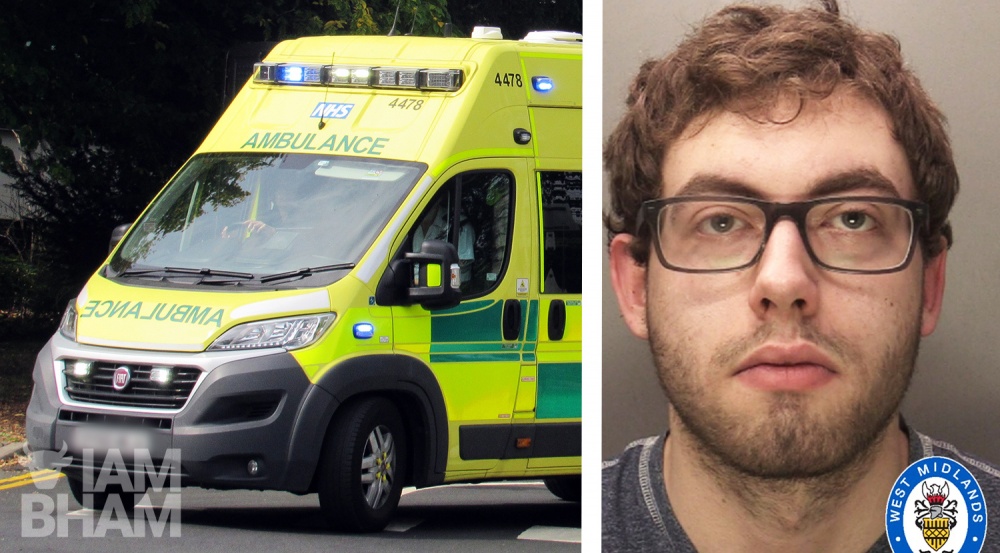 Violent thug Jamie Davies from Coventry has been jailed for attacking a student paramedic (Photo: WMP/IAB/Makizox)

A man who punched a paramedic – breaking his jaw and leaving him needing metal plates in his face – has been jailed after police caught the thug shortly after the “sickening attack”.

Jamie Davies from Coventry called for an ambulance at the height of the COVID-19 pandemic in April, claiming to be experiencing breathing difficulties.

But after NHS staff were unable to identify a health problem, he resorted to shocking violence against one of the on-duty health professionals.

Paramedics had arrived in Winifred Avenue at 9pm on 5 April but could not find anything wrong with 22-year-old Davies, who’d already made six 999 calls in the space of just over an hour – and had been seen by paramedics once already that evening.

Davies demanded an inhaler and when student paramedic Chris Cooling and his colleague walked away, cowardly Davies savagely punched Mr Cooling from behind in the face.

Davies then sped away, crashing into the ambulance as he drove off, but police spotted him behind the wheel of his damaged Vauxhall Meriva the next day in Holyhead Road and arrested him.

Investigators also found that Davies has been abusive to staff at Balliol Road doctor’s surgery where he smashed a glass door pane, just days earlier on 31 March.

Officers charged him with wounding with intent to cause grievous bodily harm and at Coventry Crown Court yesterday (24 November) as he was jailed for seven years and two months having admitted the offence. He was also banned from driving for three years.

Victim Mr Cooling, 40, was on a liquid-only diet for four weeks following surgery and has only recently returned to work on light duties.

He welcomed the sentence and said he hoped it served as a deterrent that assaults on emergency services staff will be dealt with firmly.

“This incident has had a massive impact on me,” he said. “I have so far lost seven months of my life to this attack and I am not yet able to resume my career, a career that I love.

“Like my colleagues, I come to work to help people. I suffered particularly severe injuries but many others have also been attacked. It is sentences like this that will make people stop and think before they do something similar, yet too often the sentences do not reflect the effect such incidents have on us.

Coventry Police Commander, Chief Superintendent Mike O’Hara, at the time said he was “sickened” by the incident.

“Attacks on any emergency services staff will never be tolerated but this was a particularly sickening incident on an NHS worker who was on the frontline of our national efforts to tackle coronavirus.

“I think I speak for the whole of Coventry in wishing the paramedic well in his continued recovery.”