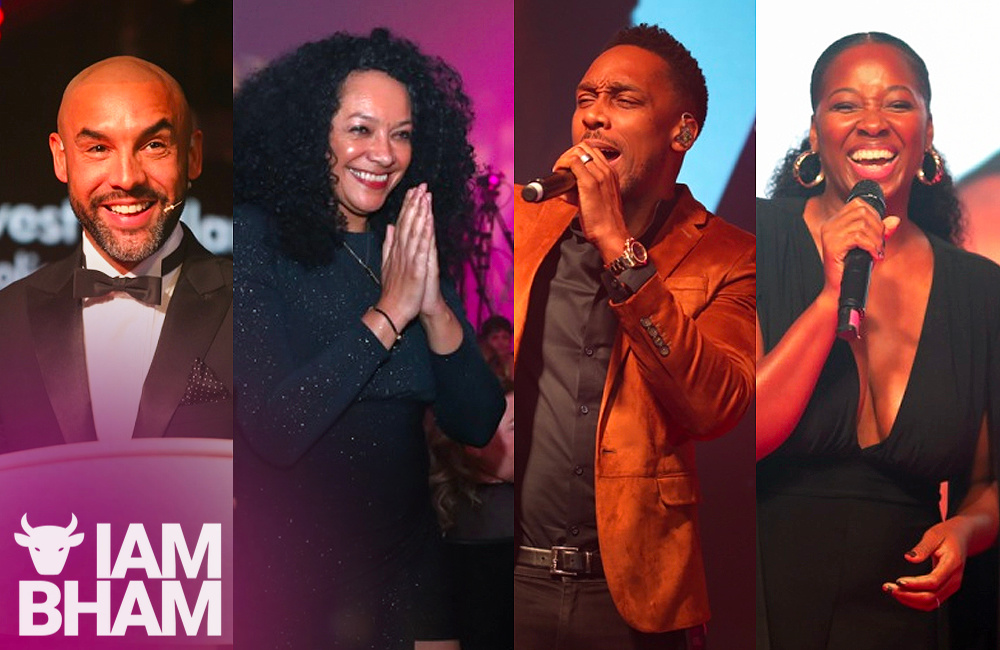 The MBCC awards returned to Birmingham for 2021 with plenty of celebrity glamour (Photos: Lensi Photography)

Unsung heroes from the community and business sectors have been honoured at a special awards ceremony in Birmingham which aims to recognise people who “go that extra mile” and inspire others to do the same.

The Multicultural Business & Community Champion (MBCC) awards took place at the Eastside Rooms in Woodcock Street on Saturday, paying tribute to unsung heroes from the region and beyond in a star-studded ceremony.

Bringing together over 700 guests together – the largest number in the event’s five-year history – the awards paid tribute to individuals who have gone over and above within their work in the corporate and community sectors over the past year.

Amongst the winners were Kanya King CBE, the CEO and founder of the Music of Black Origin (MOBO) Awards, who was recognised with the ‘Lifetime Achievement Honorary’ award; and couple Ashley Cain and Safiyya Vorajee, who were presented with the ‘Inspirational Honorary’ award for founding the Azaylia Foundation charity in memory of their daughter.

Campaigner Stuart Lawrence was also recognised, receiving a ‘Special Recognition’ award, for his dedication to anti-racism work following the murder of his brother, Stephen Lawrence.

Having postponed the awards in 2020 due to lockdown, this year’s MBCC Awards featured three brand-new categories to commemorate the exceptional times.

Claire Goodwin-Fee was chosen as ‘Lockdown Hero of the Year’, after she founded Frontline19 – a free and confidential support and counselling service for NHS and frontline workers struggling throughout the pandemic.

DJ Silk was highly commended in the same category, for providing weekly live-streamed DJ sets via Instagram during lockdown periods, uniting people at a time of isolation.

Other winners during the big night included Maureen Lewis for her years of voluntary work in Walsall, and Liz Pemberton for her anti-racist early years work.

Actor and writer Kelechi Okafor was awarded Social Activist of the Year while CJ Lloyd Webley went home with the Community Unsung Hero of the Year award.

Tru Powell organised this year’s MBCC Awards. Speaking about all of the nominees, he said:

“The stories of our winners are incredibly humbling and their tireless work to improving the world we all live in is nothing short of awe-inspiring. It is truly an honour to be able to pay tribute to their commitment and achievements through the MBCC Awards, and give these heroes the recognition they so truly deserve.

“Every single one is an inspiration to us all and I know I speak on behalf of all of the MBCC Awards judging panel, ambassadors, and guests when I say a huge ‘well done’ to them all.”

The event was hosted by famous faces Alex Beresford and Leah Charles-King and also saw musicians Lemar and Lurine Cato joined on stage by the Aston Performing Arts Academy, as guests were treated to jaw-dropping acts throughout the night, including an appearance from Jamelia.

Tweeting about the event, TV presenter Alex Beresford shared his excitement at being invited to the ceremony.

“Had the best time hosting the MBCC awards in front of an incredibly 700 strong crowd of Birmingham’s finest ladies and gentlemen across business and community.

“Huge congratulations to all the finalists and winners. Thank you for all the love. It was a pleasure to host.”

“Back hosting the MBCC awards on Saturday with Alex Beresford was a blast! Thanks Scarlette Douglas for being my date,” added television and radio personality Leah Charles-King.

In the spirit of the event, the MBCC Awards also collaborated with two charity partners, the Equality Council UK and First Class Foundation.

Chosen for their commitment to the community and their shared mission of helping people to succeed together, both organisations are passionate about increasing opportunities for marginalised groups, in particular people of colour.

With this year’s event theme of ‘anti-racism’, the awards event raised vital funds and awareness for the two causes, shining a light on how much more needs to be done.

Concluding the event, Tru Powell told guests: “It was a dream come true to bring back the MBCC Awards for 2021 and I cannot thank everyone who was part of it – from our hosts, judges, and ambassadors; through to our winners and guests – enough for making it the success it was.

“To have over 700 people in one place, celebrating these sensational people together, was incredible and I already cannot wait for the next one!”

I swear we have the most talented team in @AstonPAA. I’m incredibly thankful to run such a great organisation alongside @PelePerformer. As always thank you for providing entertainment at the @mbccawards I know you worked around the clock! @leahcharlesking @alexberesfordTV pic.twitter.com/SkrAfQSuhR

The full list of MBCC awards categories and winners: