Shard End thug jailed for biting, beating and strangling his girlfriend with his bathrobe belt 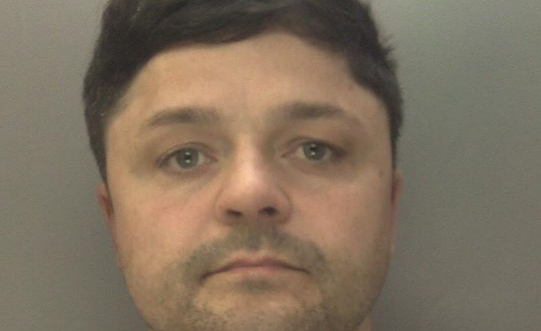 A violent thug from the Shard End area of Birmingham who bit, beat and dragged his girlfriend by her hair and asked her to marry him has been jailed for his brutal attacks.

Mario Sassano, 43, was jailed for five years for assault and coercive control which left his victim terrified and traumatized.

A Sutton Coldfield woman has waived her anonymity to speak out about the shocking abuse she suffered at the hands of her ex-partner Mario Sassano after seeing the violent bully jailed for five years, to encourage other women in similar circumstances to seek help.

Victoria O’Doherty, 43, was in a relationship with Sassano for only a few months but during that time his behaviour became obsessive, controlling and violent. He was consumed by jealously and accused her of cheating with an ex-partner, even going to the extreme of contacting him and threatening him.

Sassano, who runs a business in Sutton Coldfield, would go through his girlfriend’s phone and monitor where she was, while constantly trying to manipulate her and distance her from her family and friends.

He engineered arguments due to his unfounded suspicions and on one occasion dragged her by her hair, sat astride her and tied his dressing gown belt around her neck, just because he thought she had looked at another man while out shopping. Victoria was unable to breathe and thought she was going to die, but Sassano apologised and pleaded with her to forgive him.

Sassano became clingy and needy, and threatened to commit suicide if Victoria left him, telling her his death would be her fault. He showered her with attention and told her they needed no-one but each other.

The relationship began in October 2020 and became abusive, and by January 2021 Victoria tried to end it. Sassano bombarded her with emails and constantly turned up at her home. During one encounter he dragged her from her car by her hair and then asked her to marry him.

Sassano resorted to bribery by paying her £10,000 not to tell police about the assaults, but Victoria transferred the money straight back and reported the abuse she had suffered.

Sassano was arrested in May last year and charged with assault and coercive control.

Victoria O’Doherty bravely spoke out about her abuse in the hope that it will encourage and empower other victims to seek help.

She  said: “No other woman should ever have to suffer such horrendous, horrific abuse. Perpetrators isolate you making you feel alone. You are never alone. If you can find the courage, reach out to someone close and you won’t be judged.

“In my case without the input of the police I wouldn’t have been able to do it. Please, please have faith in our police system and the justice system. If you see any red flags or feel threatened or any behaviour that feels alarming please use Claire’s Law.

“Not enough people know about it, as I never did. There were instances where I saw the flags and if I had known about Claire’s Law it may have prevented me from some of the abuse I suffered.

“It’s a confidential platform and if there is anything to disclose you will be made aware of information that may give you some insight into the dangers of what you may be heading for, if you don’t act promptly.”

On the first day of his trial in January this year, Sassano, from Shard End in Birmingham, pleaded guilty to two counts of assault and controlling or coercive behaviour. On Friday (4 MarCH) he was jailed for three years each for the assaults to run concurrently and an additional two years for the controlling behaviour to run consecutively, in addition to his time spent on remand.

Police Staff Investigating Officer Kathryn Burns, from the Public Protection Unit, said: “No woman should have to suffer violence and psychological abuse like Sassano inflicted on Victoria, and I applaud her courage in coming forward and bringing Sassano to justice.

“He has a history of allegations against him for similar offences and I am pleased that he is safely behind bars to protect other women from him.

“We take this type of abuse extremely seriously and we have specialist officers to help people through the judiciary process.

“We also work with a number of agencies and charities who offer support as they recover from the ordeals they have been through and rebuild their lives.”